What are the long-term side effects of glyceryl trinitrate patches used to treat a tendinopathy?

Nitric oxide (NO) has been reported to help tendon healing [1,3]. One common way to deliver NO is via glyceryl trinitrate (GTN) patches. In the short run, glyceryl trinitrate can cause severe headaches, skin rashes, hypertension, and more rarely bradycardia [1,2].

What are the long-term side effects of glyceryl trinitrate patches used to treat a tendinopathy?

References (in references 1 and 3, one of the authors, George A. C. Murrell, has a conflict of interest, as indicated in the article (1) "George A. C. Murrell receives or has the potential to receive royalties from a patent on nitric oxide and tendon healing.", and as (3) says, "As the majority of the work in the area of NO in the treatment of tendinopathy has come from one group, larger multicenter trials would be useful in validating this treatment modality."):

Nitric oxide (NO) is a small free radical that is generated by a family of enzymes called the nitric oxide synthases (NOS). There are 3 isoforms of NOS: endothelial NOS (eNOS), brain or neuronal NOS (bNOS), and inducible NOS (iNOS). In experiments performed during the last 20 years, we have shown that NO is induced by all 3 isoforms of NOS after tendon injury and that NOS activity is upregulated in tendinopathy. In normal uninjured tendons, there is very little NOS activity. In injured rat and human tendons, NOS activity was found in healing fibroblasts in a temporal fashion. In animal models, competitive inhibition of NOS resulted in reduced tendon healing, whereas the addition of NO resulted in enhanced tendon healing. In cultured human cells, the addition of NO via chemical means and adenovirus transfection resulted in enhanced collagen synthesis. We performed 3 randomized, double-blinded clinical trials that demonstrated a significant positive beneficial effect of NO treatment on clinical symptoms and function in patients with Achilles tendinopathy, tennis elbow, and supraspinatus tendonitis. NO was delivered via glyceryl trinitrate (GTN) patches. We also conducted a 3-year prospective follow-up that demonstrated significant long-term efficacy of GTN patches in treating noninsertional Achilles tendinopathy. In a 5-year prospective comparison treating lateral epicondylitis, we found no additional benefits of GTN vs placebo at 5 years. The use of a new GTN patch, OrthoDerm, demonstrated no evidence for efficacy in treating chronic lateral epicondylitis. 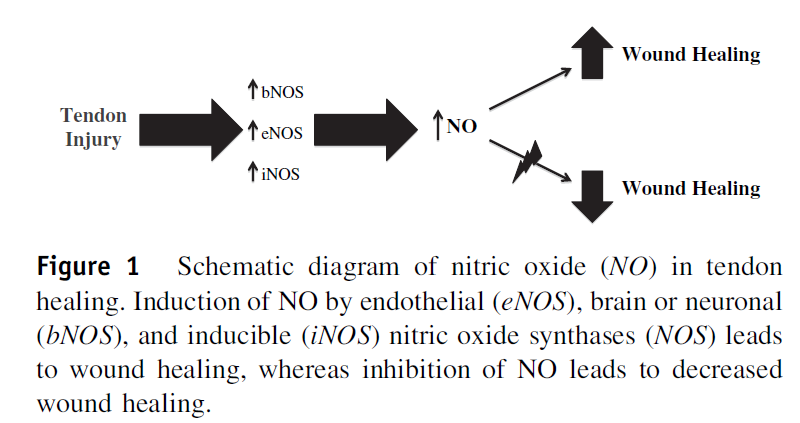 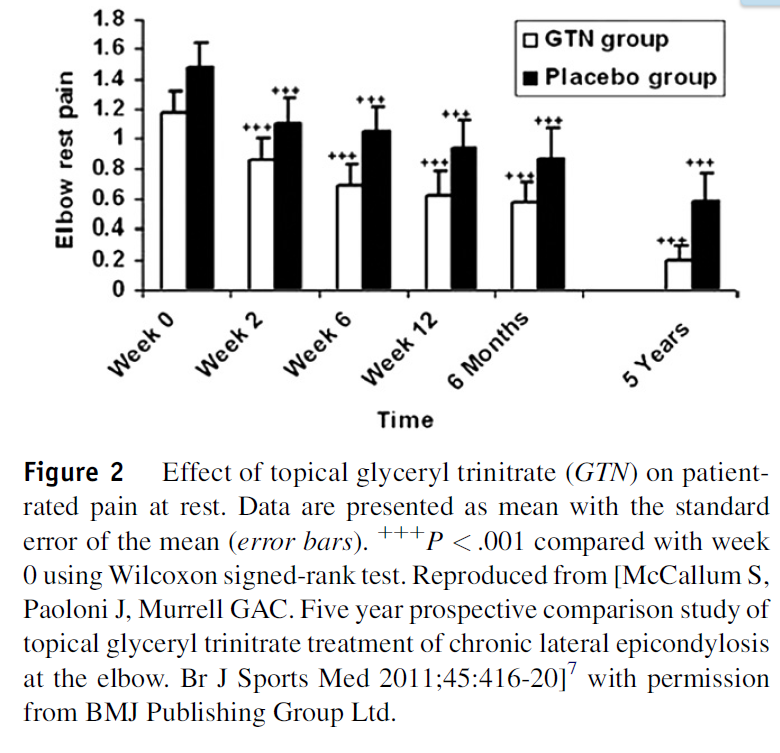 Tendinopathy is a broad term encompassing painful conditions occurring in and around tendons in response to overuse. Recent basic science research suggests little or no inflammation is present in these conditions. Thus, traditional treatment modalities aimed at controlling inflammation such as corticosteroid injections and nonsteroidal antiinflammatory medications (NSAIDS) may not be the most effective options. We performed a systematic review of the literature to determine the best treatment options for tendinopathy. We evaluated the effectiveness of NSAIDS, corticosteroid injections, exercise-based physical therapy, physical therapy modalities, shock wave therapy, sclerotherapy, nitric oxide patches, surgery, growth factors, and stem cell treatment. NSAIDS and corticosteroids appear to provide pain relief in the short term, but their effectiveness in the long term has not been demonstrated. We identified inconsistent results with shock wave therapy and physical therapy modalities such as ultrasound, iontophoresis and low-level laser therapy. Current data support the use of eccentric strengthening protocols, sclerotherapy, and nitric oxide patches, but larger, multicenter trials are needed to confirm the early results with these treatments. Preliminary work with growth factors and stem cells is promising, but further study is required in these fields. Surgery remains the last option due to the morbidity and inconsistent outcomes. The ideal treatment for tendinopathy remains unclear.

Browse other questions tagged side-effects tendinopathy tendons patches or ask your own question.

1
Why can glyceryl trinitrate (a.k.a. nitroglycerin) patches cause severe headaches?