Why is episodic use of infliximab associated with a higher incidence of antibody formation towards the drug?

It has been shown in many studies that episodic use of infliximab (and other Anti-TNF agents) increases the incidence of antibody formation towards the drug, when compared with giving the drug on a regular schedule, such as once every 8 weeks [1, 2, 3, 4, 5].

Why is this? What is the underlying mechanism for why maintenance administration results in lower incidence of antibodies than episodic administration?

Why are antibodies formed towards some drugs, such as Infliximab but not others?

Episodic use would mean to use the drug on an intermittent basis only when required.

1:Incidence and importance of antibody responses to infliximab after maintenance or episodic treatment in Crohn's disease.

Depending on viewing angle: We might observe nothing more than an artefact of measuring antibodies.

If we assume that not all patients form antibodies at the same incidence rate but all patients with the same probability and one and same patient at a constant rate then a quite simple effect of immunogenicity might be observed:
in constant administration antibodies are just used up at a constant rate, being active and bound, but not free and measurable. In episodic treatment the rate of antibody production then leads to more free antibodies (not used up) to measure – and immediately available for action against the biologic, once that is re-introduced to the system.

Interruption of scheduled maintenance anti-TNF therapy or episodic therapy has consistently been associated with higher rates of antibody detection.

A recent paper summarises the situation as:

Treatment options include biologic therapies; however, a proportion of patients lose response to biologics, partly due to the formation of anti-drug antibodies (ADAbs). Concomitant immunosuppressive agents reduce the development of ADAbs.

In most of the included studies that evaluated efficacy, the presence of ADAbs was associated with a reduction in efficacy. Efficacy was assessed in a variety of ways, including Crohn’s Disease Activity Index (CDAI) response/remission, Mayo response, endoscopic improvement and treatment discontinuation. In studies of IFX, the proportion of patients achieving and maintaining a response was generally lower for patients with detected ADAbs than those without detected ADAbs ( Supplementary Table 7). ADAbs to ADM were also associated with reduced efficacy and a loss of response, together with a high rate of secondary treatment failure; these associ-ations were shown to be statistically significant in some studies ( Supplementary Table 8). In one study,26 discontinuation of ADM treatment was reported to be very high (83.3%) in patients with ADAbs ( Supplementary Table 8).

The timing of sampling (prior to or just after the next administration) greatly influences the detection rate. Most assays do not detect ADAbs in the presence of drug; since drug concentration is the lowest just before the next infusion, this is the optimal time to sample. This might be one explanation for the formation of ADAbs being reported to be lower in RCTs than in observational studies. Often, a limited number of time points were studied, and insufficient time was allowed for drug levels to decrease prior to sampling. However, it is also likely that improved assay techniques used in observational studies, together with the selection of patients with loss of response, led to higher levels of detection of ADAbs than in RCTs.

The antigen-antibody reaction is widely used in laboratory diagnostics, including immunohaematology. It is a reversible chemical reaction:

Chasing a wild goose: Even more speculative might be the thought that in these processes an effect of continuous reinforcement versus intermittent reinforcement occurs. 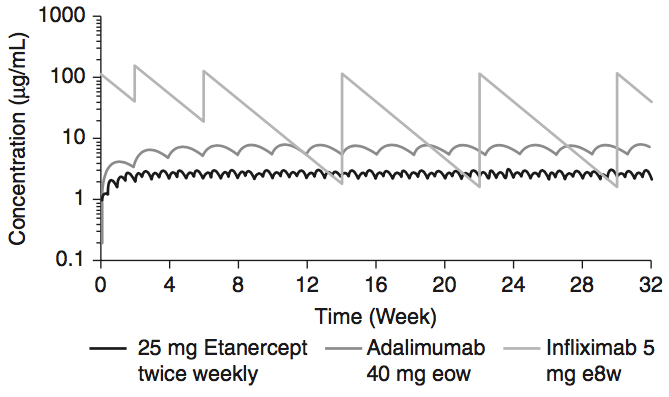 A pharmacokinetics simulation of serum concentrations of infliximab, etanercept, and adalimumab at steady state in patients with RA treated with each drug at doses and schedules shown.

Clinical consequences of immunogenicity of TNF antagonists include acquired drug resistance and infusion or injection site reactions. Anti-drug antibodies can form multivalent complexes with the target drug, leading to rapid clearance and inactivation of the drug. Strategies to deal with this include dose escalation or the addition of concomitant immunosuppressive therapy to reduce antibody formation. Studies of the immunogenicity of protein-based drugs have suggested that chimeric antibodies are generally more immunogenic than humanized or human antibodies. However, comparisons of the immunogenic potential of the anti-TNF agents are difficult, largely because of differences in the sensitivity of the assays designed to detect anti-drug antibodies, as well as the interference in the assays of the drug itself.
Jennifer L. Jones: "Are all anti-TNF agents the same?", in: Peter M. Irving et al (Eds): "Clinical Dilemmas in Inflammatory Bowel Disease", Wiley-Blackwell: Chichester, Hobokem 22011.

7
Why does the weight matter when consuming a certain amount of a specific drug?
1
Why is Chlorprothixene not approved for use in the United States?
17
Why is thalidomide a current drug on the market?
4
Why does acne get worse during the first two weeks of treatment with isotretinoin?
3
Why is methadone not prescribed with naloxone for opioid use disorder?
2
How do you know if an over the counter drug is safely processed and safe to use?