Does a cancer survivor have a higher than average risk of future cancer?

With no recurrence five years after treatment, does a person have average risk of a future cancer ( considered in context of the persons demographics )? Would the risk be affected by the type of treatment of the original cancer ( chemo, radiation, surgery, etc.) ?

The first part of your question is very difficult to answer for the reasons mentioned in Narusan's comment: Specifically, comparing cancer incidence rates between many different groups of cancer survivors and people from matched demographics who have never had cancer is going to be very difficult, especially since these sets of data would be sourced from varied studies without the same controls. However, the second part of your question—whether the original type of treatment plays a role in new cancer formation (secondary malignancies)—has been investigated.

Conclusion: The risk of fatal secondary malignancy differed substantially between IMRT [intensity-modulated radiation therapy] and conventional radiation therapy for prostate cancer, as well as between different IMRT approaches. Perhaps this risk should be considered when choosing the optimal treatment technique and delivery system for patients who will undergo prostate radiation.

Here, IMRT was shown to deliver a higher "out-of-field" dose (raditation to untargeted parts of the body) and had a greater associated risk of secondary malignancies than conventional radiation.

Results: The main contributors (>80%) to the neutron-induced risk are neutrons generated in the treatment head. Treatment volume can influence the risk by up to a factor of ∼2. Young patients are subject to significantly greater risks than are adult patients because of the geometric differences and age dependency of the risk models. Breast cancer should be the main concern for females. For males, the risks of lung cancer, leukemia, and thyroid cancer were significant for pediatric patients. In contrast, leukemia was the leading risk for an adult. Most lifetime risks were <1% (70-Gy treatment). The only exceptions were breast, thyroid, and lung cancer for females. For female thyroid cancer, treatment risk can exceed baseline risk.

Conclusion: The risk of developing a second malignancy from neutrons from proton beam therapy of a brain lesion is small (i.e., presumably outweighed by the therapeutic benefit) but not negligible (i.e., potentially greater than the baseline risk). The patient's age at treatment plays a major role.

Like the IMRT, neutron bombardment from proton therapy was shown to have off-target effects and contribute to new cancers.

Hopefully, these papers serve as decent representations of different secondary malignancy potentials with respect to primary cancer therapies. In the article "Understanding Your Risk of Developing Secondary Cancers," the National Comprehensive Cancer Network reminds readers to prioritize their care without regard to comparatively low-probability secondary malignancies:

...patients should not cause themselves undue worry about this possibility. "The biggest risk to patients with cancer is the cancer that they are battling. They should follow the treatment plan designed by their oncologist and not worry about other factors. The vast majority of patients are not going to develop a secondary malignancy because of cancer treatment for the original cancer."

Finally, some medical imaging techniques are similar to those cancer therapies that are more likely to cause secondary malignancies. The BEIR VII report "Health Risks from Exposure to Low Levels of Ionizing Radiation" includes risk estimates for different imaging and radiology techinques (although some academic debate exists on whether it's an appropriate estimation tool for this, the table below uses data from BEIR VII). Keep in mind that any amount of ionizing radiation is not good for your dividing cells! 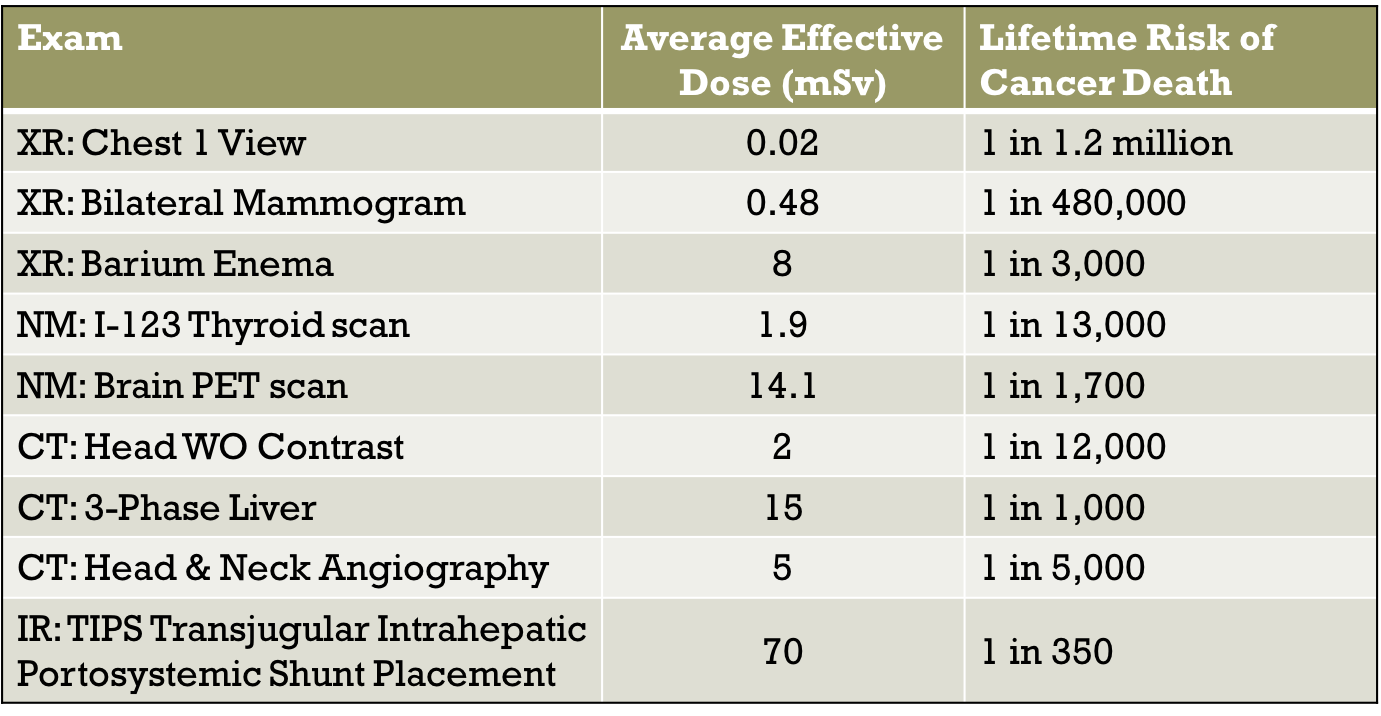 This is a big topic and there is a huge amount of medical literature and research on the effectiveness of treatments and survival rates, so I will try to give a general overview and take a different slant to the other answer.

Many factors affect recurrence rates, including the type of cancer, treatment, family history and the passage of time. Cancer is not just one disease but a very wide range of conditions, so it is hard to generalise.

This can be considered from two aspects:

Cancer that returns after treatment

Having one type of cancer does make you more likely to have a second cancer of that type in future, as it may suggest an underlying genetic or environmental susceptibility. For example, some people carry mutations of the BRCA genes that are linked with breast, ovarian and prostate cancers. If these gene mutations are present, there is an increased risk of several types of cancer (and probably a significant family history). Fundamentally, all cancers arise from damage or mutations to DNA. BRCA is normally involved in repair of DNA damage, so mutations that prevent this increase the likelihood of DNA damage causing a cancer.

However, most times that cancer “comes back” are because it never went away fully in the first place. Even a single malignant cell escaping treatment can cause a recurrence some time later. This varies greatly on the type of cancer, grade (how aggressive the cancer is, tested by histology and immunohistochemisty for example) and stage (how far the cancer has spread, measured by imaging such as MRI). Here is a link to further explanations of grading and staging cancer.

Another source: Cancer Research UK - Why some cancers come back

We do not have technology that can detect just a few malignant cells that might remain after treatment, which is why people are monitored for years post-treatment.

This is where the term cancer survivor is a little misleading. There is actually an XKCD cartoon that has a good visual representation of this.

As mentioned above, certain genetic susceptibilities may mean someone with one type of cancer is more prone to another separate one at baseline. For example, someone who has breast cancer and a BRCA mutation is at increased risk of ovarian cancer as well.

I was going to talk about the carcinogenic effects of treatments like radiotherapy and chemotherapy and the risk of cancer arising solely due to these treatments, but this has been covered excellently in the answer by Bruce. If that was the intended focus of the question you should definitely accept that answer :)

Not the answer you're looking for? Browse other questions tagged cancer risks or ask your own question.

52
Is there any health risk in cellular phones?
8
Why does following a fiber-rich diet help reduce the odds of getting cancer?
2
How long does it take for an illness from radiation to develop?
2
Why does the use of quinolones increase the risk of tendinopathies?
6
Health risk associated with living close to a power line: Cancer risk & exposure to electromagnetic field
5
Does Nicotine cause Cancer?
4
How is hereditary cancer risk estimated?
2
If screening for a disease is not recommended, should someone with positive findings take further action?
4
Is there reasonable cause to suspect that taking creatine increases risk of testicular cancer causatively?