Any research on brain's processes involved in evil actions?

I'm reading Zimbardo's The lucifer effect: understanding how good people turn to evil in which he describes the famous Stanford prison experiment that investigated the psychological effects of perceived power, focusing on the struggle between prisoners and prison guards. The experiment's results favor situational attribution of behavior over dispositional attribution. It seemed that the situation, rather than their individual personalities, caused the participants' evil behavior.

Zimbardo concluded that a set of psychological processes - among them deindividuation and obedience to authority - can induce good people to do evil.

Specifiying Zimbardo's definition of evil: - "Evil consists in intentionally behaving in ways that harm, abuse, demean, dehumanize, or destroy innocent others - or using one's authority and systemic power to encourage or permit others to do so on your behalf" - my question is:

Does a cerebral circuit of evil induced by situational circumstances exist ?

When you put it that way...

...no, that is absolutely ridiculous (no offense).

In the human body (and generally in nature) there are only physical and biochemical mechanisms.

All behaviours that are described by the behavioural sciences (e.g. psychology) can be interpreted by biochemical mechanisms. For example, if you suddenly feel threatened then your heart rate will increase and you will feel the urge to either run away or get very aggressive and stay put. That's because a chemical reaction in your brain triggered the fight-or-flight response and cortisol is having a party with adrenaline and all your internal organs are invited. 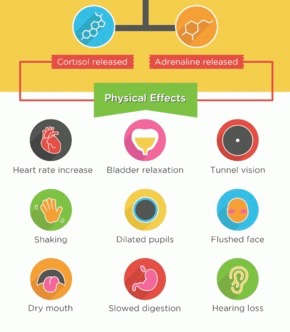 You won't be a coward if you run away and not evil if you decide to fight... it doesn't matter how you were raised or what you believe in because even if you are a pacifist, you will try to protect yourself if you have to and chemistry is on your side. The same principle applies to everything else, including aggression which can be influenced by numerous hormones that themselves are influenced by numerous situations and of course genetics.

Biochemical mechanisms and pathways are very complex and they even overlap and interact with each other.

Here's a map of all the metabolic pathways to get an idea.

Now, when it comes to the complex human behaviour, you can imagine how difficult it is to put the pieces together.

Thought is not arbitrary or philosophical, it is pure chemistry! It's just... not easy to understand, measure, describe, experiment with...

What Are Thoughts Made Of?

Finally, other keywords you're looking for are obedience and compliance. The problem with those terms though is that they're a bit abstract when it comes to science. We haven't established any satisfying connection between them and the human brain.

Not the answer you're looking for? Browse other questions tagged brain neurology neuroscience neurotransmitter or ask your own question.

50
Is there any health risk in cellular phones?
7
Is there any solid scientific evidence that Cinnamon can prevent Alzheimer's disease?
4
Are there any examples that gave a person new mental abililities after a head injury?
4
Any link between Cubital Tunnel Syndrome and “chronic” tendonitis?
3
What (if any) are the measurement units for neurotransmitters?
0
Can any disease enhance Brain functioning instead of reducing it?