Are all Infants' Aquatic Instincts lost after 7ish months? Can they be maintained if skills are utilized often?

Babies have extraordinary instincts upon their arrival just into this world. It just happens naturally. One of these is of the swimming variety as witnessed in this video Underwater Baby Divers. Who knew!?!

The trait we just witnessed in this video is described in this article, Life Science: 5 Incredible Baby Skills, known as:

the "diving reflex," also known as the bradycardic response; also exhibited by seals and other aquatic animals, the instinct may be a vestige of our ancient marine origins.

It works like this: Infants up to 6 months old whose heads are submerged in water will naturally hold their breath. At the same time, their heart rates slow, helping them to conserve oxygen, and blood circulates primarily between their most vital organs, the heart and brain. The survival response keeps accidentally submerged babies alive much longer than adults would survive underwater.

Another astounding video to watch is Babies Swimming, but it is almost 4 minutes long and has uber cheesy music in the background.

A scientific/medically based article is found here: Bradycardic response during submersion in infant swimming

Now these infants aren't engaging in synchronized swimming extravaganzas or anything of that nature, but what they are capable of doing just on instincts is incredible!!! I imagine this is a vestige of a positive evolutionary trait. For example, if an infant slipped into a lake while mother was bathing nearby, etc. etc. etc.

NOW TO MY QUESTIONS:

1. Why do infants lose these instincts around 7ish months?

--- Is it because they are not as vulnerable?

--- Or that they are larger and have more strength and their reflexes don't work the same?

--- Or they simply forget because their minds are being filled with other important pieces of information?

2. If under the watchful eye of a professional trainer, lifeguard, parent, etc., the infant utilized these skills frequently, would they be able to maintain their "diving reflex" beyond the 7ish month period?

To be clear I do not advocate at anytime that these infants have advanced swimming capabilities to swim alone... so never leave a baby or child unattended near a body of water

First of all, the study should not be trusted too much. Thirty six test subjects does not seem very much to me in order to make such a claim. However, &AtlLED's opinion in the comment differs from this.

From the abstract (emphasis mine):

Thirty-six infants were studied during diving exercises in infant swimming. [...] Although the bradycardic response gradually decreases, the study shows that a clear-cut response exists in children older than has previously been reported.

However, I think it is clear that the heart-rate does seem to slow down. There is nothing to very little studies available so the rest of my answer is somewhat educated speculation.

The frontal lobe is also the most common place for brain injury to occur. Damage to the frontal lobe can create changes in personality, limited facial expressions, and difficulty in interpreting one’s environment, such as not being able to adequately assess risk and danger. (healthline.com)

Therefore, an infants frontal lobe is not well developed at the age of 3 months or less.

The volume of the hippocampal formations increased sharply until the age of 2 years, and continued to increase slowly thereafter. (Study)

Take a look at this neat graph and notice the huge jump from 0 years to 2 years. The steepest growth is presumably around 0,5 years (just guessing from approximation the tangent).

It seems therefore fairly reasonable to me to conclude that around the age of 6 months, the frontal lobe is well developed so that the infant is able to correctly address the risk of drowning. And as any normal human, they would start to panic when they realise that they are drowning.
This panicking will cause an increase of heart rate and is the opposite of a bradycardia response.

A bit on evolution

Evolutionary speaking, it makes sense to have a survive-by-all-means mechanism that will be triggered as soon as one is in serious danger. Such a mechanism can be counterproductive in a very few examples, like here when the bradycardia response is reversed. Nevertheless, it is very useful in most cases and therefore, we have this mode.

I would therefore conclude (again, educated guessing) that the bradycardia response of babies was never "intended" (1) and is just a side product of them not being able to judge a situation correctly.

A "standard" newborn male infant weighs around 3kg, is about 48cm tall and its head circumference is roughly 34cm, so the radius is 10 cm. Assuming the body is cylindric, this would give us a density of 5.8g/cm^3 (V = π r^2 h, density = V / mass) (Values taken from the Intergrowth.21 study). 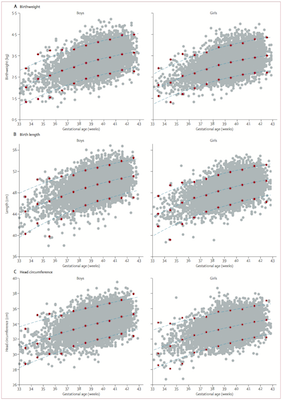 I weigh roughly 70kg, am about 180cm tall and my head radius is maybe 30cm, which means my density is about 103.8g/cm^3.
Concluding, an infants buoyancy is significantly larger than mine. As the infant grows and gains weight, the buoyancy will decrease until the density reaches the density of a full grown human during adolescents.

This does not explain why the heart rate is so low, but it is another factor as to why infants are quite good at swimming.

(1): Intended is a pretty bad word here. I mean, the argument was about evolution and not creation. I meant by this that the bradycardia response is just a side-product of multiple factors: The survive-by-all-means mechanism in adults and the baby's inability to correctly asses danger.

Not the answer you're looking for? Browse other questions tagged infant swimming reflex-impulse instinct apnea-holding-breath or ask your own question.