Can the blood accumulated after stroke be cured?

Recently my uncle had a stroke. He is now in rest and taking medicine. He has his right leg paralyzed, although the condition is improving.

The doctor said that "blood is accumulated in the brain".

Someone told me that the accumulated blood will not cure totally. But I thought, taking proper medicine can remove the blood.

What does having a stroke mean? What are the outcomes of strokes? Are there any medications to take in case of a stroke?

First of all, I am going to stay quite “general” as I understand you are not from the field. The aim of my post is really to provide some clarifications to your question.

There are two types of strokes: ischemic (approx. 85%) and hemorrhagic (approx 15%). As you are speaking of “blood accumulated in the brain” I understand that you mean hemorrhagic stroke (also know as intracerebral hemorrage).

There are different causes for ICH (see table below for an exhaustive list), among which ruptured aneurysm (=balloon-like bulge in the wall of a blood vessel), arterial hypertension (which leads to chronic modification of the structure blood vessels, which becomes weaken) and cerebral amyloid antipathy (= deposition of amyloid which renders the vessel weak and increases its risk of rupture. This occurs often in the elderly) 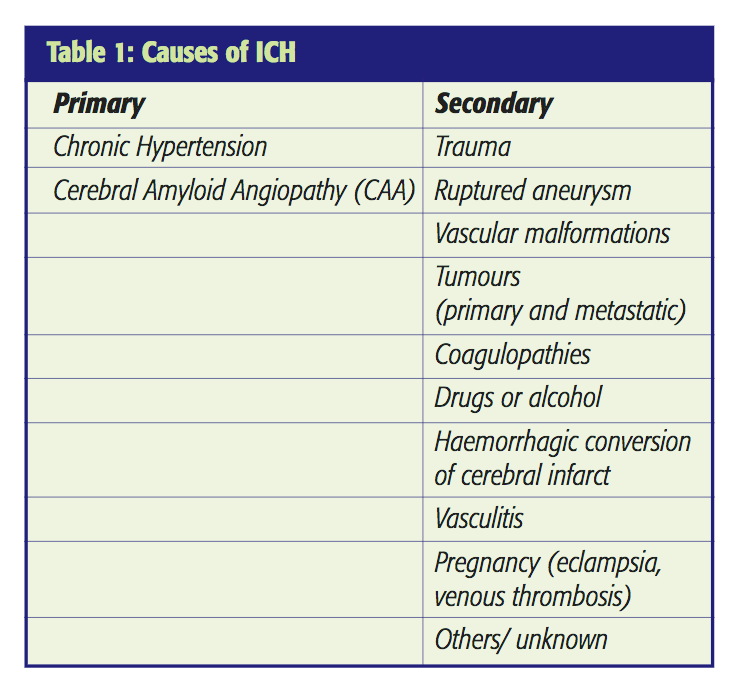 Depending on the location of the ruptured vessel, the brain region and hence the associated clinical symptoms vary.

What happens to the accumulated blood in the brain parenchyma?

It doesn’t stay for ever in the brain. Like in any other regions of the body, the hematoma becomes necrotic over time (=blood cells die). The presence of these cells in the parenchyma leads to an inflammation (+ presence of oedema). In particular, specialised cells (called macrophages) arrive into the zone and start “eating” the dead blood and dead neuronal cells. Below is a table which summarises the change occurring after an ICH:

Finally regarding your question on the outcome. Well, this depends on several factors. ICH generally show poorer outcomes than ischemic stroke but as I don’t know your uncle’s case it is not possible to give you a prognosis (and probably nobody can, as it depends on so many variables).

However, what has been proven in the literature, is that recovery after a stroke is dependent on the capacity of the brain to “reorganise” and to “adapt” to the neuronal loss. I don’t know in which country you are, but in general, patients with ICH are generally quickly hospitalised in a so called "stroke unit “ (if no neurosurgical intervention is needed) where intensive physiotherapy is done in order to quickly “train” the brain to develop new neuronal pathways.

Drugs have no impact on accumulated blood. Their main aim is to try to reduce "further damages", for example by reducing the hypertension.

EDIT (after complement of information from the OP)

So according to the report attached, your uncle suffers from an ischemic stroke ("subacute infarction in the middle left cerebral artery"). This shifts the diagnosis from an hemorrhagic stroke (as you suggested with your description of "blood accumulated in the brain") to an ischemic stroke. Ischemic stroke is caused by a "clot" which occludes the vessel.

The middle cerebral artery is a common source of ischemic stroke. The most frequent cause is atrial fibrillation (=abnormal rythm of the heart, which makes the heart pump "inefficiently" leading to accumulated blood clots to be ejected to the brain).

As from the report, it looks like your uncle had a subacute stroke (= some hours ago), probably your uncle was outside the so called "lysis" time, which is the time were lysis (= destruction of the clot which occludes the vessel) can be undertaken.

The therapy is similar to what I have described regarding ICH (particularly regarding physiotherapy). Though, one major difference is that probably a cause for the ischemic stroke will be investigated. Probably he will have a heart rythm investigation and a carotid doppler (= look at the carotid in the neck to see whether there are some stenosis (narrowing of vessel) or plaques). They might also start some drugs which depend on your uncle's situation (anticoagulation, statins,etc...)

Hope this brought some clarification!

Not the answer you're looking for? Browse other questions tagged brain blood-pressure stroke or ask your own question.