How accurate is nutrition information on supplement tablets in the the UK?

What is the legally required accuracy of nutrition information (ie. mass of vitamins and minerals) on food and tablet packaging in the UK?

It is recognised that it is not always possible for foods to contain the exact amount of nutrients labelled, owing to natural variations and variations arising from production and length of storage. However, it is important that the actual nutrient content of foods should not deviate substantially from labelled amounts, as the consumer could otherwise be misled.

As a result, the European Commission has drawn up, in collaboration with EU Member States, guidance on the setting of tolerances for nutrient values. The document sets tolerances for:

The following tables are from the EU

GUIDANCE DOCUMENT FOR COMPETENT AUTHORITIES FOR THE CONTROL OF COMPLIANCE WITH EU LEGISLATION ON: 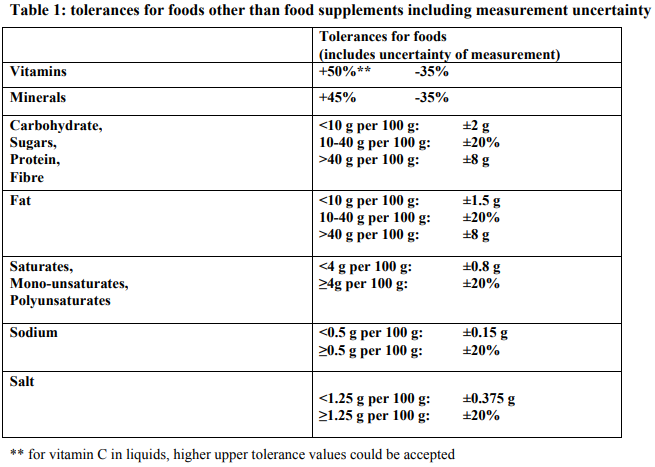 How this will be affected with Brexit when the UK leaves the EU is anyone's guess, although to start with, EU laws will be integrated into UK law to start with until the decisions are made by parliament on which laws to remove. (Source)

Not the answer you're looking for? Browse other questions tagged nutrition supplement legal or ask your own question.

21
How do you read a US nutrition label?
5
How much sucralose does Powerade Zero contain? Why does that information not appear to be provided?
4
What are trustworthy food and nutrition information websites, without ties to food companies?
0
Why does the calories from fat to total calories ratio not match the grams of fat to grams per serving ratio?
1
Which essential nutrient is the first that will cause debilitating illness if supply is insufficient
7
Should I meet nutritional recommendations (for e.g., RDAs) daily?
1
Checking nutrition balance