Are there medications that relieve and stop migraines quickly?

From websites such as this from Mayo Clinic, powerful migraine medications mostly appear to prevent migraines, and NOT to stop an acute episode?

However, if a migraine sufferer wants to minimize the quantity of medication consumed, are there any medications that are intended for a fast effect and relief? If so, which ones?

As you alluded to in the question, medications used for migraine headaches generally fall into two categories, prophylactic (meds taken daily to prevent migraines) and abortive (meds taken when a migraine starts in order to stop it). Your question is about the second group.

“Instantly” (as noted in the comments) is a little absurd; there is obviously some delay between the time of ingestion of the medication and its effect at receptors that provides relief of pain. However, you’re right to note that the time-to-onset of anti-migraine effect is relevant, and this is a case where the available medications do vary in this respect in a way that tempers their usefulness.

Medications taken orally (by mouth) are generally the slowest to onset of action. Intravenous medications, introduced directly into the bloodstream, are generally the fastest. Perhaps less well-known are other methods that are nearly as fast as IV: sublingual, intranasal, and inhaled. In each of these cases, the medication is placed in apposition to blood vessels that are able to absorb it directly. This only works for certain types of medications (mostly lipophilic ones that can cross into blood vessels), but it’s fast and avoids some of the difficulties of oral administration.* Subcutaneous, transdermal or intramuscular administration is generally also somewhat quicker to reach the bloodstream than oral medications.

Migraines: oral may not be best

For reasons that are not fully understood, abortive medications are more effective when used early in the attack, so the quicker routes of administration are also expected to provide relatively more benefit. In addition, migraine headaches are often associated with severe nausea and vomiting which may limit the utility of oral medications. Even when vomiting is not present, migraines are associated with gastric stasis, meaning that the stomach is slow to empty into the duodenum, the part of the gut where medications are generally absorbed. 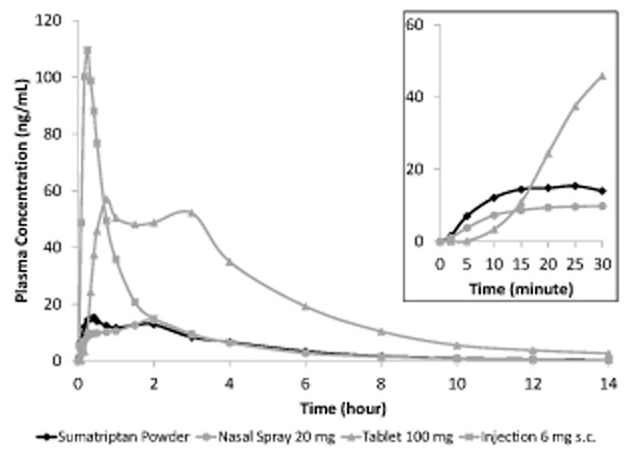 *For practical purposes, all three of these routes tend to be not quite as quick as would be expected theoretically because a portion of the drug ends up swallowed and subject to all of the usual constraint of oral administration.

Tfelt-Hansen P Efficacy and adverse events of subcutaneous, oral, and intranasal sumatriptan used for migraine treatment: a systematic review based on number needed to treat. Cephalalgia. 1998;18(8):532.

Not the answer you're looking for? Browse other questions tagged pain migraine or ask your own question.

7
What are the symptoms of Migraine and how to categorise into severe or mild etc
5
What are the general causes of migraine and how can it be treated?
20
Is there any proof that acupuncture is an effective pain remedy?
11
Are OTC pain medications safer than prescriptions?
1
Why are chocolate and cheeses common triggers for migraines?
4
Migraines and tryptophan