How long is infectious mononucleosis contagious?

The English Wikipedia article about infectious mononucleosis says about transmission:

The length of time that an individual remains contagious is unclear, but the chances of passing the illness to someone else may be the highest during the first six weeks following infection. Some studies indicate that a person can spread the infection for many months, possibly up to a year and a half.

So according to this, you may be contagious for at most 78 weeks.

The German Wikipedia article about this disease (Pfeiffer-Drüsenfieber) says about transmission:

This roughly translates to: The persistent viral disease reactivates itself frequently. Affected persons usually don’t notice this, but in these periods the virus is contained in their saliva.

So according to this, you may be contagious your whole life, but only periodically.

Is this really contradictory or am I missing something? What is correct?

You picked an interesting virus (and illness) to ask about. There are still a lot of studies being conducted and many of the answers aren't in.

A bit of background. Epstein-Barr virus (EBV - the virus that causes infectious mononucleosis) is a member of the herpesvirus family, very "successful" viruses in that most of the world's population are infected (90% of the world's population has been infected with EBV), and the viruses are known to remain in the host's body throughout their lifetimes (that is, the host doesn't usually die from the disease, instead living to pass it on to others). With Herpes Simplex, reactivation is in the form of cold sores. With varicella-zoster virus - the cause of chickenpox - reactivation takes the form of "shingles". So, to expect EBV of periodic reactivation isn't very far fetched.

In the US, ~50% of the population seroconverts (becomes infected as manifested by antibodies to the virus) before 5 years of age. This population has not been extensively studied for asymptomatic viral shedding. In the rest of the population, most cases of EBV infection are still subclinical, but some adolescents and young adults - about 25% of those newly infected - get the illness known as infectious mononucleosis (IM). This has been the group most studied group in terms of who is shedding virus and who isn't.

Once infected, humans carry the virus for life in a small number of white blood cells called "memory B lymphocytes". Immediately following infection, the cells shedding the most virus are pharyngeal epithelial cells (though this has been challenged), so virus is present in the saliva, but has also been found in other bodily fluids. 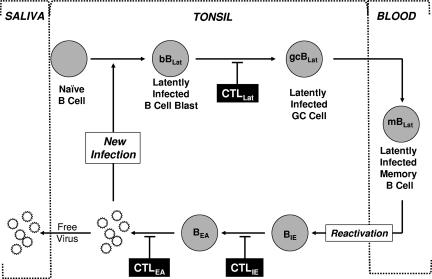 Infectivity of saliva was determined by lymphocyte transformation in cell cultures of fresh cord-blood lymphocytes.

All newly infected patients had sustained viral shedding in the saliva, and all still had infectious saliva at day 180, 16 patients maintaining a high EBV load during the 6 months of follow-up, and 4 showing a low level of virus, though viral load was significantly lower at D180 than at D90 in all patients. Of the controls (healthy people who had positive antibodies), 8 subjects had 2–4 episodes of detectable EBV in their saliva, with the remaining 2 having no EBV in their saliva during the follow-up period.

In the patient blood samples, EBV-infected B cells decreased significantly from day 0 to day 180, with 18 showing a viral rebound between D30 and D90. Among these 18, 4 patients had tonsillitis and lymphadenopathy (!) which indicates a recurrence. Only one of the control subjects showed no detectable EBV in their Memory B Cells during the entire follow-up period. This shows that patients with IM remain highly infectious during convalescence.

So, whatever you have read, there is probably proof for it, as well as much else that wasn't read! It appears that healthy adults and children shed virus intermittently for an unknown number of years.

Not the answer you're looking for? Browse other questions tagged disease disease-transmission or ask your own question.

3
Yearly flu and cold got worse after Mononucleosis
2
What to do about throat ulcers?

5
Is pneumonia contagious?
9
If a human is irradiated, how contagious are they?
3
Infectious chicken pox
1
How contagious is glandular fever?
1
Can contagious disease transmitted via sharing things?
8
Are there diseases for which infection does not grant lasting immunity but a vaccine does?
0
How contagious is Covid-19 - in laypersons terms?