Some women have an unpleasant vaginal odor. This can sometimes influence their sexual activity.

What influences this vaginal odor? Eating habits? Use of tampons?

What can be done to limit this vaginal odor?

This is an interesting question, which comes frequently on Health SE.

Compounds of vaginal fluid are proteins, carbohydrates, fatty acids. There is also a vaginal bacterial flora (such as vaginal lactobacilla) which produces organic acids as metabolic byproducts which can contribute to the vaginal odor.

So what influences those odors?

Certainly the menstrual cycle. Here an interesting study published some decades ago (more than > 30 years) in Science:

A research group sampled vaginal secretions in women and asked participants to "sniff" the bottle containing the secretions. They were then asked to evaluate the intensity and pleasantness of the odor's secretion. Here a graph of the variation in vaginal odor during a menstrual cycle: 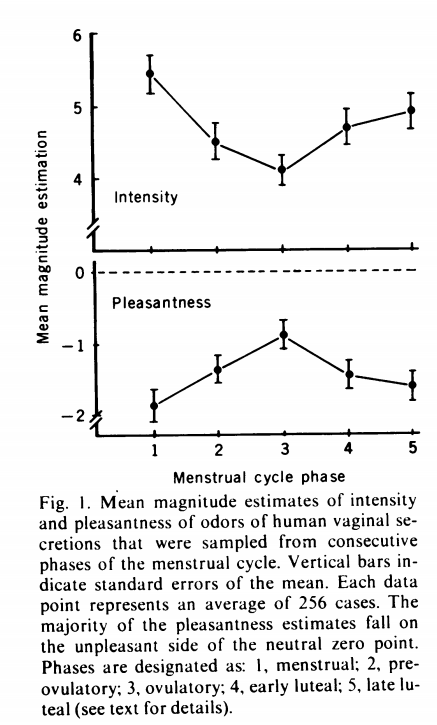 As you can see there is high variability, although slightly less unpleasant odor were noted in the preovulatory and ovulatory phase. So there is probably the role of sex hormones and an inter-individual variability

Infections or medications (in particular antibiotics) which alters the vaginal ecoflora, leading some bacteries to outpower other bacterias, which in turn leads to the production of other organic compounds, associated with different odors.

In women with bacterial vaginosis (= altered vaginal flora), one recent study has reported that

increased dietary fat intake is associated with increased risk of BV and severe BV, whereas increased intake of folate, vitamin A, and calcium may decrease the risk of severe BV.

so maybe diet can influence this vaginal odor.

As odor perception can be "subjective" an inter-individual variability of its pleasantness should also be taken into account.

Not the answer you're looking for? Browse other questions tagged sex reproduction or ask your own question.