How often should I use mouthwash?

However, I've read that (I'll link when I find the article again) mouthwashing everyday doesn't really help as much as doing it everyday for 2 weeks, taking a break, then using it for another 2 weeks.

How often should I use mouthwash, and are there any consequences to doing it everyday?

I think the comment made by Carpetsmoker is important in this context.

Some may find surprising (at least I did) that actually fluoride toothpaste is not clearly superior to fluoride containing mouth rinses according to a Cochrane Review published in 2009. Unfortunately all reviews are about children or adolescent patients.

Mark Gabriel wonders the intermittent use of mouth rinses. When one is planning of intermittent use it is only natural that mouth rinse is used alongside with regular brushing. Then were faced with the important aspect pointed out by Carpetsmoker. Of course one could use brushing and mouth rinse alternatively since they are equally effective preventing caries. I think one should use either one and not to alternate since usually the more complex routines one developed, more likely they fail.

As so, I think we should look at whether mouth rinses provide any additional benefit to brushing. Three most common active ingredients in mouth rinses are some form of alcohol, chlorhexidine and fluoride (Wikipedia).

The longer-term effects of any treatment should always be evaluated, especially in this case since the use is projected to last possible of life-time. Chlorhexidine containing mouth rinses may cause staining and affect oral flora. The are no specific guidelines how long to use chlorhexidine containing mouth rinses but one sources discourages using it more than 3-4 weeks (1,3).

There is a 2004 Cochrane review investigating the effects of combining mouth rinse to regular brushing (Free review). 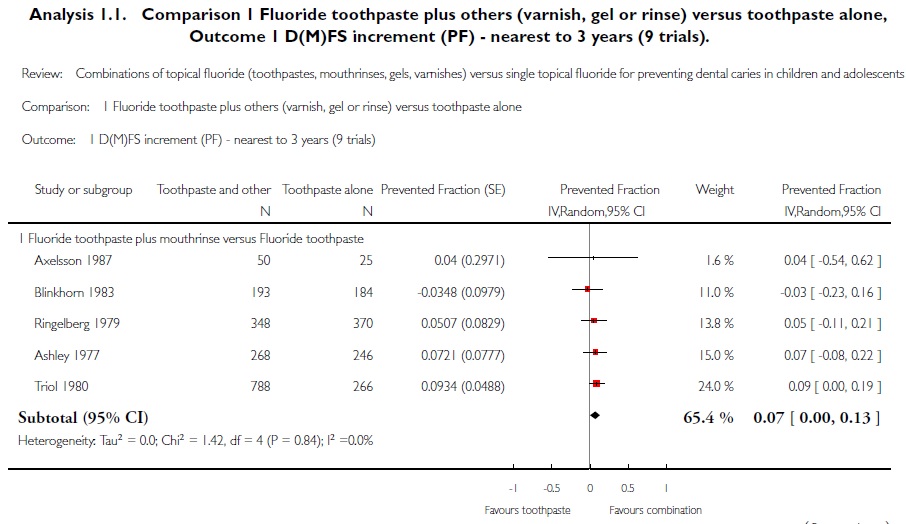 The main outcome was caries increment measured by the change in decayed, missing and filled tooth surfaces (D(M)FS).

Five authors investigated brushing+mouth rinse versus brushing. There is some benefit from the combination treatment but it is very minimal. The same conclusion was drawn in two reviews by American Dental Association: "Based on his findings, the author said that mouthrinses made with CHX, essential oils, or CPC could help reduce plaque and gingivitis in people who brushed and flossed. He also said that using these rinses along with brushing and flossing reduced plaque and gingivitis more than brushing and flossing alone." (4).

After a long commentary I still did not answer the question in the topic. But, to conclude, there may be some benefit combining mouth rinse and brushing. Intermittent use may be better if mouth rinse contains alcohol or chlorhexidine. I am fairly certain that current literature does not include explicit answer to the OP´s question.

Not the answer you're looking for? Browse other questions tagged dentistry or ask your own question.

22
How do I know if I'm flossing correctly?
2
Does mouthwash provide any benefits?

14
How frequently should non-alcoholic mouthwashes be used?
2
Is targeted antimicrobial peptide mouthwash currently available anywhere (including experimentally)?
6
What procedures do dentists use for cleaning teeth, is there variation, and what is the rationale?
4
Why aren't fluoride mouthwashes with cetylpyridinium chloride labeled as both anticavity and antibacterial?
2
How often and in what manner can one use warm water with salt for oral health?
2
Does mouthwash provide any benefits?