Does a person's healthy hemoglobin level vary from country to country?

Every time I get my hemoglobin tested, I am always below average.

The doctors here say that the "average" has been calculated according to values from western countries, and that they don't apply to, for example, people in India; that even if you have a below-average hemoglobin, you are pretty safe.

I wish to know if plasma hemoglobin is dependent on the region you live in, and if is it true that the average rate for populations in western countries may not be applicable for Indians.

To be precise, one needs to know what "normal" means.

Normal is actually a function of two measurements (for example, hemoglobin level and number of people sampled with said hemoglobin level). This generates a bell-shaped curve.

For example, if one measured 500 American males at 30 years of age who were 5'10 inches tall, your curve would look something like this: 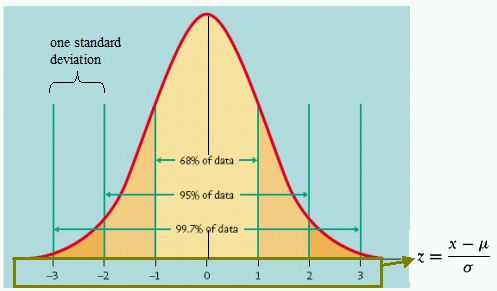 where zero (the mean) might be 177 pounds. Including one standard deviation above and below the mean would represent ~68% of the population. Some will be thin, some will be heavy; they will fall outside this 68%.

If the same measurements were taken in Africa, for instance, where there is a difference in diet and body habitus, then the mean might be 134 pounds.

So, yes, it is possible to have different "normals" for different countries. However, that does not mean the same thing as "healthy" or "optimum".

There are exceptions, for example, sherpas in Nepal have a lower number of red blood cells compared to lowlanders who must accommodate themselves to lower oxygen in the highlands by making more red blood cells. This is a result of selection for a gene that regulates red blood cell production in the low oxygen of the highlands, with other compensatory mechanisms.

Not the answer you're looking for? Browse other questions tagged hematology or ask your own question.