What do blood pressure readings indicate?

I have heard 120 by 80 is considered normal blood pressure. What do these numbers indicate?

I am not a science student. Please explain in non-complicated language.

blood-pressure cardiology biological-parameter
Share
Improve this question
edited May 4, 2015 at 3:28

I would like to add a brief answer in common language. The heart is a pump which pushes blood into the arteries in pulsatile manner (pushes out blood with each heart beat). As the blood is pushed in the arteries, the pressure rises to a peak called systolic pressure, which is usually around 120 mm Hg. As the heart's main chamber (left ventricle) relaxes, the pressure tends to fall. But fall in pressure is arrested by closure of a valve called aortic valve. Further fall in pressure occurs by flow of blood to peripheral tissues. The lowest limit to which the pressure falls in main arteries is called diastolic pressure and it is usually around 80 mm Hg.

Morever, when the blood pressure is checked with a mercury instrument, the cuff around arm is inflated to about 200 mm Hg (to occlude the flow in artery of the arm) and then slowly pressure is reduced while listening to the sounds over artery in front of the elbow joint. Knocking sounds start coming at systolic pressure (usually around 120 mm Hg). These sounds disappear as the cuff pressure is lowered below diastolic blood pressure (usually around 80 mm Hg). Hence, the BP reading is said to be 120/80.

The following figure from the Blood pressure Wikipedia page should make this clearer. The notch on the downnstroke indicates point of closure of the aortic valve. 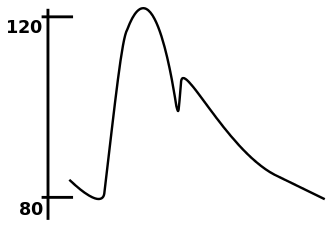 Edit in response to comment below: The mechanism of these sounds is not entirely clear and has been subject of study since long (see this 1929 article: http://www.ahjonline.com/article/S0002-8703(29)90277-5/abstract . Many theories have been proposed e.g. https://www.ncbi.nlm.nih.gov/pubmed/2774311 . It is likely to originate from the artery wall due to vibrations created by turbulent flow that occurs when blood flow is partially obstructed (ref: https://www.medicine.mcgill.ca/physio/vlab/cardio/auscul.htm). There is no sound when the flow is totally obstructed i.e. cuff pressure greater than systolic pressure. Also, there is no sound when cuff pressure is lower than diastolic since the flow then is laminar and not turbulent. The nature of sounds (called Korotkoff sounds) also varies as pressure is lowered from systolic to diastolic and 5 phases have been identified: https://en.wikipedia.org/wiki/Korotkoff_sounds#The_five_Korotkoff_sounds

The two numbers indicate different amounts of pressure (measured in millimeters of mercury) in the arteries at different times in the cardiac cycle. The cardiac cycle just refers to the different phases during a single beat of the heart.

The top number is called the “systolic blood pressure.” That’s because it corresponds to the phase of the cardiac cycle called “systole,” from the Greek word for “contraction.” That is when the ventricles of the heart are squeezing out the blood. During this phase, the pressure in the arteries is higher because the blood is being pumped into them.

The bottom number is called the “diastolic blood pressure.” It corresponds to the phase of the cardiac cycle called “diastole,” from the Greek word for “a separation.” This is the time in between the heart beats when the ventricle is relaxing. Because the blood is not actively being pushed into the vessels, this number is always lower.

This physiology textbook has a good explanation of the cardiac cycle.

In case by “what do the numbers indicate?” you intended something about clinical outcomes, I will speak to that briefly.

People argue about whether systolic or diastolic blood pressure is a more important during treatment of high blood pressure. The answer probably varies according to age, among other factors. The most widely used (in the US) consensus guidelines state;

Not the answer you're looking for? Browse other questions tagged blood-pressure cardiology biological-parameter or ask your own question.

9
How much difference should there be between systolic and diastolic pressure?
3
Why is the cost of health care so high?