Is the pain when walking or running with such a disorder an indicator that hearing loss is occuring or going to occur? Ear pain is considered a symptom for this disorder. Can that be an indicator of sensorineural hearing loss in this case?

It can also be called temporomandibular joint dysfunction and the most common acronyms I can find are TMJ, TMD and TMJD.

TMD is often characterised by aural symptoms such as tinnitus, otalgia, vertigo, otic fullness sensation, hyperacousia or hypoacousia. Current understanding of TMD suggest that temporomandibular joint pain is due to pathological contraction of masticatory muscles which stimulate the realease of inflammatory molecules around the temporomandibular joint.

Several hypothesis have been suggested to explain the otological symptoms associated with TMD among which that the position of the joint disk during jaw movement increases pressure in the Eustachian tube, the ear structures and the auriculotemporal and masseteric nerve, which innervate the tympanic membrane, the anterosuperior part of the external ear and the tragus. Additionally, studies have reported that in TMD, the tensor tympani muscle is in a pathological hypertonic state that may lead to hypoacusia, tinnitius, vertigo, otalgia and otic fulness sensation. Finally, some studies showed that TMD peripherally sensitizes the V and VII nerve pairs, leading to tonic spasm of these middle ear muscles and to hearing loss.

While, I could not find a study directly correlating ear pain with hearing loss, a study (see Sources) showed that hearing loss is correlated to TMD severity. Below a table representation of the quantitative hearing loss by TMD severity among the individuals included in the study. 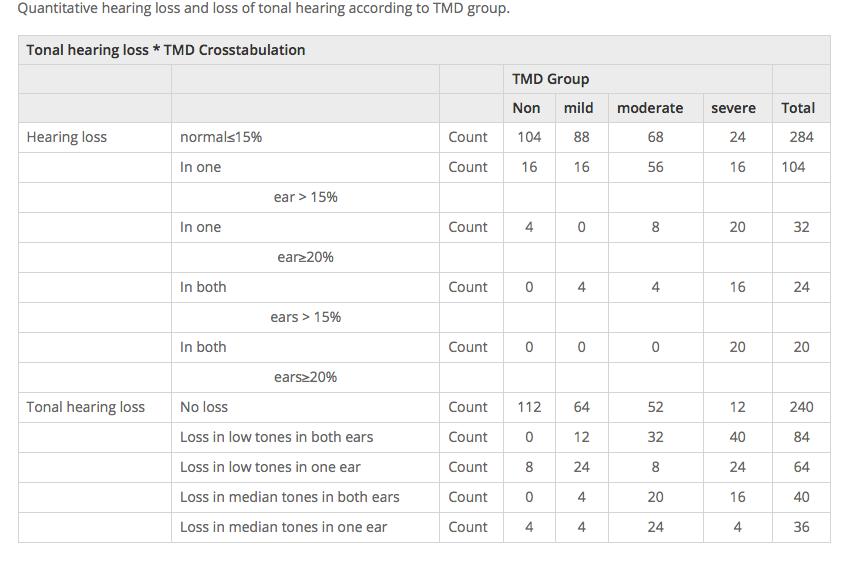 In this study among 464 healthy individuals, subjects were stratified into four groups: non TMD, mild TMD, moderate TMD and severe TMD. Severity of TMD was based on the score obtained after completion of an anamnestic questionnaire composed of 10 questions. Unilateral chewing and facial pain were considered in the questionnaire. In the results section, authors report that

pain in the temporomandibular joint was reported by 96 subjects. It was experienced by 3% of the non-TMD group, 11.1% of the mild group, 8.8% of the moderate group and 70.8% of the severe TMD group.

Those results indirectly suggest that pain in the temporomandibular joint might be correlated to hearing loss, but this has of course to be confirmed.

TMJ syndrome may cause ear pain, ringing in the ears (tinnitus), and hearing loss. Hearing loss begins with inflammation. With its close proximity to the ear, any inflammation in the muscles of the jaw can cause the muscles associated with the ear to become constricted. I found a study regarding Tmj and Tinnitus.

Not the answer you're looking for? Browse other questions tagged cause-and-effect hearing-impaired tmj-jaw-pain hearing-loss or ask your own question.

3
Looking for research data for amount of hearing loss resulting from otitis media with effusion (OME)
5
Alternatives to hearing aids
2
Should I use headphones when I have hearing loss?
5
Deafness and hearing aids and cochlear implants
1
Do hearing-impaired individuals need more sleep?
3
Optimal length of music break to reduce long term risks of noise-induced hearing loss?
1
Can antacids cause ear crystals (which can cause dizzines)?