What should I consider when deciding to remove a blister or not?

While playing indoor soccer a couple days ago, I was fouled and fell forwards so that my hand skidded across the court a bit. It left the blister as you see in the image here: 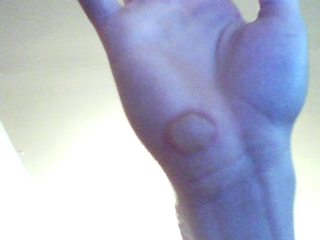 What should I consider when deciding to remove this blister? I could open and drain this blister, removing the excess skin afterwards, or leave it as is.

In the blister shown, the likelihood of rupture is decreased because of the thickness of the epidermis on the palm of the hand, so you can leave it alone until the underlying area re-epithelializes. You'll know this is happening because of the decreased pain and the slow reabsorption of the fluid. Eventually you will just peal it off what's left of the blister, finding clean new skin underneath.

But this is a great starting point for an answer about the treatment of blisters in general: is it better to leave them alone, drain the fluid, or de-roof them (take the top of the blister off)?

There is a lot of disagreement about what constitutes the optimal treatment of blisters. Some background might be in order. 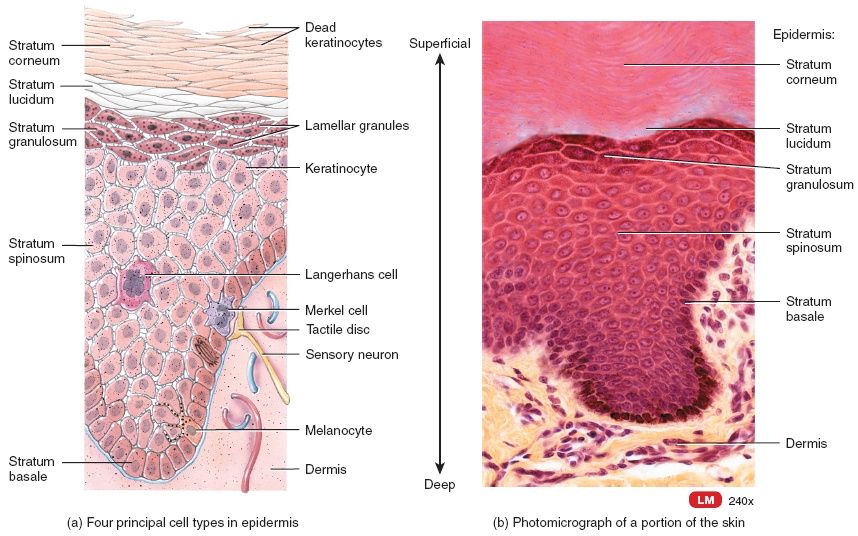 Blisters form when the upper layers of the epidermis separate from the lower layers, usually at the level of the stratum spinosum. At that level, the cells (because of proximity to the dermis, which contains the capillaries) have moisture in and between them. When the separation occurs, sterile fluid from the stratum spinosum oozes unopposed into the space between the layers, and a blister forms.

The fluid, similar to plasma, contains molecules which may promote the rapid division which takes place in the stratum basale. This then differentiates into the upper layers of the epidermis and healing by new skin formation.

Hydrostatic pressure causes the area of the separation to fill with a fluid that is similar in composition to plasma but has a lower protein level. About 6 hours after formation of the blister, cells in the blister base begin to take amino acids and nucleosides; at 24 hours, there is high mitotic activity in the basal cells; at 48 and 120 hours, new stratum granulosum and stratum corneum, respectively, can be seen.

The sterile fluid is a very rich and inviting growth medium for bacteria. For this reason, some people think it should be removed. The denuded skin underneath has lost some of it's protection against infection. For this reason, some think the blister should be left intact. Between these two extremes are those who favor drainage of the fluid leaving the cover intact.

To my thinking (and training), this is the worst option. Poking a hole in the blister, no matter how cleanly it's done, will leave a point of entry for bacteria (it doesn't take much). The bacteria will flourish in the moisture (which will still seep into the space) under the roof of the blister, protected from being washed away. This may (and often does) lead to an infection of the wound.

It's much better to prevent infection than to treat it.

The reasoning of either of the other camps is more supportable. I favor leaving the blister intact as long as possible, giving the underlying wound time to form new stratified protective epidermalis.

Treatment by people in this camp consists of carefully cleaning and disinfecting the surface of the blister and the surrounding skin, and covering it loosely with protective padding, usually gauze, then wrapping the entire thing with gauze wrap. The patient is instructed to check the blister daily; if it "pops" or becomes cloudy, the roof must be removed (most people prefer to have this done by a doctor or nurse), the area cleaned to remove any bacteria which might have entered, and a sterile dressing (over a light application of an antibacterial cream) reapplied, and changes daily until healed.

The opposite camp reasons that the blister will break anyway, so get it over with and get the sterile dressing on, then clean and redress (with a light application of an antibacterial cream) daily. Also, if the blister is tense, it may be impeding healing of the base by decreasing blood flow. The problem with this approach is that it hurts more than leaving it alone, and the risk of infection is still greater than if the blister is intact.

Many studies have been done to try to determine the best approach. Common sense plays a role. If the blister is very delicate (as in a large, tense and fragile blister of a burn), or if it looks unstable, I'll remove the roof of the blister. If I think it can be preserved for even one or two days, I'll leave it on. Every day it's left on without infection is a day of healing and decreased pain as new skin is made.

There seems to be a paucity of good clinical evidence related to this subject, despite several review articles. The sole paper found involved a small sample, but showed infection rates to be higher if blisters are aspirated or deroofed, and that pain scores were higher in the group that underwent deroofing.

From a pain point of view:

The common sense comes in with type, size, and location of blister, reliability of care by the patient or their family, location or level of activity likely to cause rupture, or in the case of hikers' blisters (and others away from medical care), what the best model is to prevent infection while still using the involved area if necessary.

Also changing the scene are the new available protective dressings of deroofed blisters that allow moist healing, non-occlusive protection and visibility of the underlying skin.

Generally speaking, it's best to leave blisters undisturbed. Unroofing the blister completely is definitely ill-advised, as it exposes the entire dermis underneath, removing a primary barrier to infection. Cover it loosely with rolled gauze and leave it alone; it will either drain on its own, or reabsorb the fluid over time.

In first aid, we normally leave blisters alone. But there is one exception. In multi day walking events, there is a protocol to treat blisters.

If the blister is open or it contains blood, consult a medical professional.

A blister is a small pocket of fluid in the upper skin layers and is one of the body’s responses to injury or pressure.

Depending on the cause, the treatment could include:

In general, you shouldn't break small blisters (no bigger than your little fingernail) and leave blisters intact (do not attempt to pop them). However if blisters break, clean the area with mild soap and water, apply an antibiotic ointment if you see signs of infection (apply "patch test" to make sure you don't have a bad reaction), and cover/protect it with a nonstick gauze bandage (a clean dressing). Do not tear off the flaps of skin left over from broken blisters. You'll shed them soon enough; don't risk irritating your skin even more now.

For soothing, you may take a cool bath or shower and apply a a clean towel dampened with cool tap watermayo.

If you develop larger blisters, contact a doctor (podiatrist, pharmacist, dermatologist), because large blisters are best removed, as they rarely will remain intact on their own. Also seek medical help if you experience immediate complications, such as extreme pain, headache, confusion, nausea or chills.

These herbs may be applied topically to minor burns:

Following tips may improve your healing and general health:

Other natural home remedies include:

See: How to Treat a Sunburn at wikiHow

Not the answer you're looking for? Browse other questions tagged wound removal or ask your own question.

10
Is it possible to reverse the skin cell damage caused by sunlight by taking appropriate vitamins?

1
Are there instances where surface pus should not be removed?