Why do doctors use tendon instead of ligament in key-hole surgery?

For knee surgery, the most common method is to use a tendon from elsewhere in patient's body to replace the torn anterior cruciate ligament. But why tendon not ligament? Tendon have different composition from ligament. It should take longer repair time using tendon instead of ligament.

Graham Chiu put it very well: "Where would you get a ligament from that isn't going to make you worse off?"

We rely on our ligaments for the structural stability of our skeleton. This supersedes the integrity of our muscular attachments, although there are a few exceptions. Since they're attached to muscles, tendons are going to be more superficial (easier to access) and more abundant.

Some circumstances can necessitate the transfer (not a complete removal as in tendon harvest, but the redirection of one end) of a ligament. This happens when one skeletal structure's stability is secondary to the stability of a neighboring bony union, so a ligament is appropriately reprioritized:

Symptomatic Acromioclavicular (AC) dislocations have historically been surgically treated with Coracoclavicular (CC) ligament reconstruction with transfer of the Coracoacromial (CA) ligament. The distal clavicle was resected and stabilized with CC ligament reconstruction using the CA ligament. The CA ligament was passed into the medullary canal and tensioned, using a modified 'docking' technique. The docking procedure allows for tensioning of the transferred CA ligament and healing of the ligament in an intramedullary bone tunnel. Excellent clinical results were achieved, decreasing the risk of recurrent distal clavicle instability. 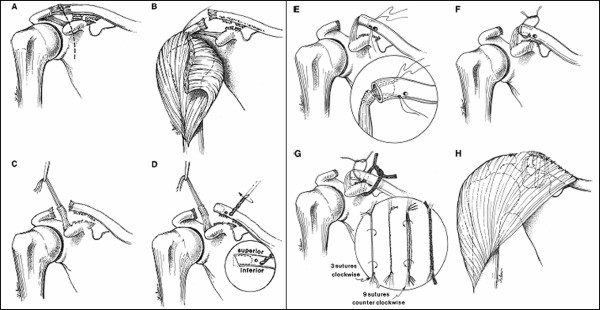 2
Why does tendon overuse sometimes evolve into a tendinitis and sometimes evolve into a tendinosis?
6
Why not use epinephrine in heart failure?
1
Why do testosterone / anabolic steroid injection increase the risk of tendon rupture?
3
Different types of nociceptors in muscle vs connective tissue?
2
What would a nearly-universal list of medical specialties look like
3
Why don't dentists use stitches after doing a tooth extraction?