What is the tablet inside generic Omeprazole capsules

Inside every generic delayed-release capsule of Omeprazole is what you would expect, hundreds of tiny granules, but there is also an entire tablet. An oblong, white, plain (no text) tablet. What is the tablet? 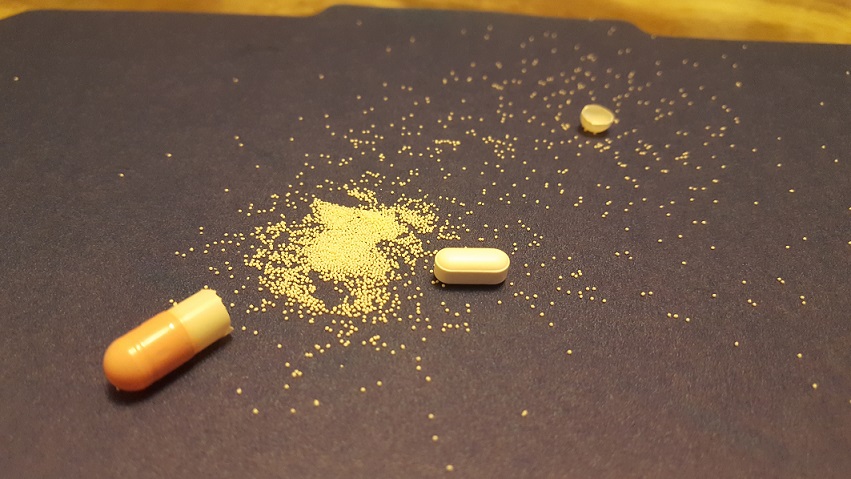 I also tried to search for any formal information about the product's contents and composition, but couldn't find anything, probably because it is a generic product sold at a supermarket. At any rate, this kind of composition (capsule, pellets and tablet) seems to form the mechanism for the 'delayed release' of Omeprazole, as written on the package. 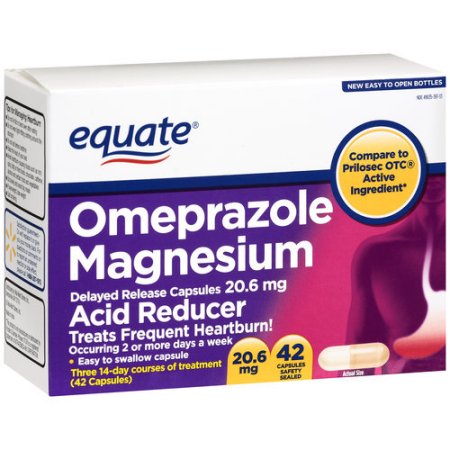 Omeprazole is a drug with a rather short half-life (0.5-1 hour according to Drug Bank). This means that without any intervention in its pharmacokinetics (absorption, elimination time), it will start working in reducing stomach acid rather quickly - Immediate-release Omeprazole should be taken shortly (about 30 minutes) before eating, in order to reduce stomach acid prior to or during eating.

In order to make Omeprazole more friendly to the patient, and remove the need to take it only half an hour before eating (thus imposing limitations on the patient and increasing the risk of improper use that might lead to heartburn), delayed-release formulations have been developed. Their main difference and advantage is that the patient does not have to take the capsule only before eating - once he takes the capsule, its contents are slowly released in the body (more slowly than the immediate release formulation), thus providing a delayed effect throughout the day. That is why delayed-release Omeprazole should only be taken once a day (usually in the morning).

The delayed release mechanism is comprised of the pellets and the tablet. The pellets, being smaller, start to disintegrate and release the active ingredient Omeprazole before the tablet (but only after passing through the stomach, since they are enteric-coated as mentioned before). Meanwhile the tablet starts to dissolve, disintegrate and release the active ingredient, but this happens more slowly. After many calculations, it was possible to formulate the capsule and its contents in such a way that one capsule covers an entire day (24 hours). This enables the patient to take one capsule in the morning and act as usual, without worrying about getting heartburn after eating.

As I said in the beginning, I was unable to find formal documentation for this mechanism of delayed release, but the consumers' questions in Walmart's website seem to point in that direction (see page 7; please note that these answers are most probably not provided by professionals, but by customers and others). See also definition no. 2 here, which also seems to apply for this capsule's composition.

Couldn't find anything definitive about what it is, but the monograph approved by the FDA only allows Omeprazole as the active ingredient. So it can't be anything that is designed to have an active effect on the body. Also magnesium is not listed as an inactive ingredient anywhere, so we can count that out. If I were to bet I'd say it's just lactose and filler (which is listed under the inactive ingredients and there's basically no volume for it to be in the granules) to give the capsule weight and aid in swallowing/handling. With just the granules the capsule might not have much weight and make consumers think it's empty or not filled correctly or get stuck in the throat more easily.

The enteric coated granules definitely contain the active drug according to every source I could find.

13
Why is it so much harder to swallow pills than it is to swallow food?
3
What is the benefit of effervescent tablets?
1
Prevent-Release Systems for Opioid Painkillers Vs Placebo