What are the health risks of drinking Diet Coke while chewing Mentos?

I assume many of you are aware what happens when you drop Mentos into Diet Coke bottle: 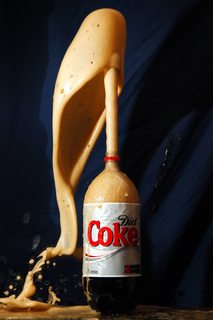 However, that Wikipedia article does not mention what happens if this eruption happens inside a person, i.e. someone drinking Diet Coke while chewing a Mentos gum.

What will happen, and what are the health risks, if any?

There is a myth that drinking Diet Coke while chewing Mentos causes your stomach to explode, though this has been disproved by MythBusters and Snopes. Both sources say that the reason for the explosion between Diet Coke and Mentos is because of the outside of the Mentos reacting with the Diet Coke. If the Mentos are still in your mouth, the Diet Coke will most likely explode, but if they are in your stomach, they won't cause an explosion, but they still may cause a lot of burping. Still, none of those sources are very reliable, so I'm going to have to prove how it works chemically.

This study testing the reaction states that

"It is clear...that the roughness of the sample is a major contributor to the explosiveness of the reaction."

This Steve Spangler Science experiment page also agrees that the surface of the candy is an incredibly important factor in the Diet Coke/Mentos reaction.

When you drop the Mentos into the soda, the gelatin and gum arabic from the dissolving candy break the surface tension.

Not the answer you're looking for? Browse other questions tagged food-safety drug-interactions drinks chew-chewing breath-freshners or ask your own question.