A person's O2 saturation, when measured in ambiant air at sea level with a pulse oxymeter (SpO2), is considered as normal between 95 and 100%.

I've read (non-sourced Wikipedia FR fragment, no mention of this in Wikipedia EN) and heard (informal discussions with medical and rescue staff) that this value decreases significantly if the subject is a smoker.

This raises the following questions:

When I was a smoker, my own SpO2 was usually 100%. The saturation of my smoker colleagues who tried is also normal. This doesn't prove anything as this does not constitute a study - just a bunch of measure without methodolology -, this is just to say I never observed this phenomenon.

Although long-term smoking often does lead to changes in the lungs that cause hypoxemia (low peripheral O2 Saturation, a.k.a. SpO2), these effects are not immediate. In fact, in the short term, SpO2 may even be spuriously high, consistent with your observation. We should distinguish between the factors that drive changes in O2 saturation in long-term when compared to short-term smoking.*

Another answer discussed the increased carbon monoxide (CO) levels in smokers, which is an immediate effect of the inhaled cigarette smoke that is dose-dependent (i.e. heavy smokers will inhale more CO than light smokers).

In most young, healthy people, oxygen saturation is 98-100% anyway, so this difference is usually negligible. However, the point remains that the OP’s observation is fully consistent with the effects of short-term smoking.

Long-term smokers frequently do have low oxygen saturation despite the spurious elevation due to carbon monoxide. A full explanation of the mechanism would require a textbook of respiratory physiology. The basic idea is that the toxins in cigarette smoke lead to inflammation and remodeling in the lung that cause both obstructive pulmonary disease and decreased alveolar diffusing capacity.

It has been shown that early inflammatory changes are present even in young smokers with normal pulmonary function tests. These microscopic changes in the lung do not cause measurable changes in oxygen saturation or pulmonary function tests. However, evidence like this should reinforce to the OP (and any other former smokers around) how absolutely fabulous it is that you quit smoking.

*The exact time period (more precisely, number of pack-years) after which the long-term effects begin to dominate the acute effects has substantial inter-individual variability.
**This is rarely seen in real life, and it would only be present in those with higher doses of CO than that incurred from normal cigarette smoking. The theoretical point remains.

Yes, SpO2 levels can be depressed in smokers, but the body will compensate for some of the effects which can explain why you may have had normal saturation levels. There are also age considerations, as well as how much a person smokes.

One of the culprits in cigarette smoke is CO, or Carbon Monoxide. CO shares the same binding sites as O2 in blood hemoglobin (Hg), and actually has 200 times greater affinity than O2. So when you smoke, the CO travels across and prevents some Hg from picking up oxygen. The net result is that your heart starts working harder to get more blood around, which can keep up your sat levels. There is a decent plain English explanation here.

In addition to this, there are other changes that can occur in longtime smokers. This study from 1983 found that in females and smokers over 50 have associated increases in red cell volume and reduced plasma volume. This suggests that the body adapts to the decreased O2 count by producing more RBC's. While this sounds like a great adaptation, it also means that with the reduced plasma volume, the blood is "thicker", which means that the heart has to work harder to push it around.

TL;DR: Yes, O2 saturation is impaired by continued exposure to CO as a long term effect. However, the good news is that the body is remarkably resilient, and depending on length of time a person smokes, the body will start reversing the effects of smoking within a week or two. Shameless self promotion: Reversing effects of smoking.

Yes, smokers probably function with less oxygen, but is this really a bad thing?

My comments are strictly for the open minded!

I am a 50 year old chronic cigarette smoker and my readings are usually in the range of 97 - 100 when my hands are warm. I have had readings of 100+ on a few occasions which I assume to be a fault of the machine!

I think it is highly plausible that smokers have less oxygen running around the blood stream and as JohnP points out CO has very pointy elbows in a queue to get on the bus! But where I differ is that this is not neccessarily a bad thing! It could actually be theraputic for certain conditions where a there is less oxygen in the blood stream than is desirable. Take for example emphysema.

In this study from the Australian Bureau of Statistics, where the study subjects were picked at random from the general population and asked to self report on their health and smoking status.It showed that never smokers have a higher percentage of pretty much all diseases (including cancers and hypertension etc) with the exception of bronchitis and emphysema which is consistent with a causal hypothesis for smoking.

For persons over the age of 45 the percentages are for bronchitis and emphysema:

So smokers have double the risk for bronchitis and emphysema compared to never smokers and although this risk is not as great as many figures that the anti-smoking industry alludes to , it is however a significantly larger risk. And as this study is randomised it is likely to be a fair reflection of reality.

See above figures in table below. 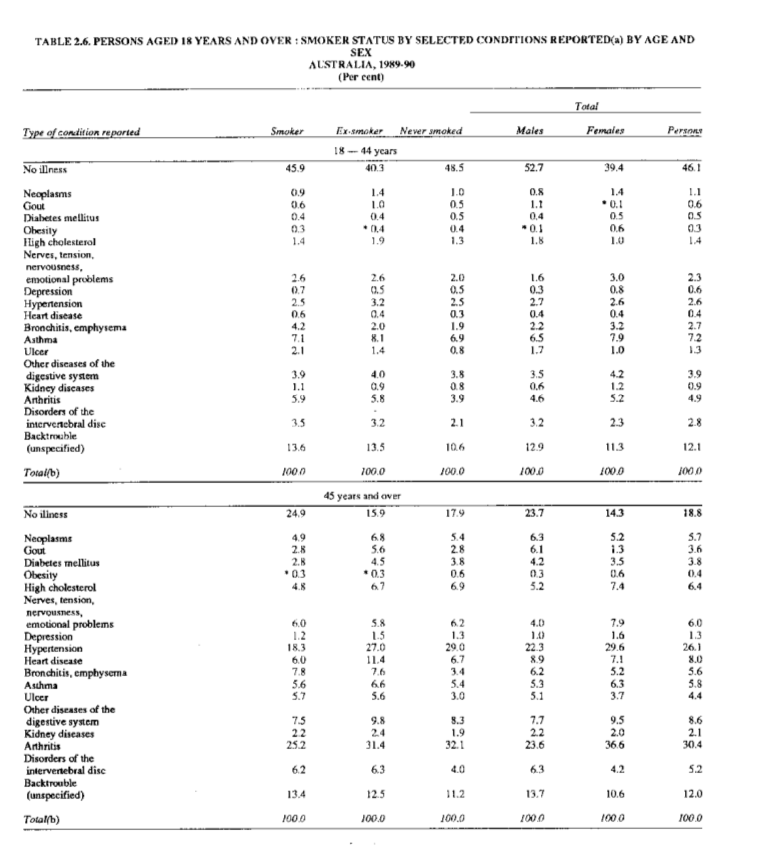 Both smokers and former smokers have roughly double the rate of bronchitis and emphysema which is consistent with the hypothosis that smoking caused these conditions through some unknown mechanism. But it could also be that smokers are choosing to smoke because they feel an immediate therapeutic effect from smoking. And stopping smoking did not significantly reduce the number of former smokers that got the disease (7.8% vs 7.6%) which suggests that smoking may not be causal and could be merely therapeutic.

Paracetamol has an immediate therapeutic effect for people but we don't just assume that it causes every disease known to human kind just because people that use it have diseases. We know that it is an analgesic and people use it for pain relief. If tobacco were paracetamol, the anti-smoking industry could plausibly claim that it causes all known diseases but without supporting evidence it would be foolish to believe it.

If it is true that healthy smokers go about their day to day business with significantly less oxygen than their never smoking friends then this is another way of saying smokers can function with less oxygen. It is as if smokers are just permanently altitude training. When never smokers do their daily business at sea level smokers are doing the same but a few thousand feet further up. This is all quite rational I think.

But is there evidence that smoking has an immediate therapeutic effect for oxygen starved people?

I can find anecdotal evidence from mountain climbers here is a quote from a Mount Everest expedition in 1922. Source the Guardian

Cigarettes as an aid to climbing Report, November 21 1922

Captain GJ Finch, who took part in the Mount Everest expedition, speaking at a meeting of the Royal Geographical Society, London, last evening on the equipment for high climbing, testified to the comfort of cigarette smoking at very high altitude. He said that he and two other members of the expedition camped at 25,000ft for over 26 hours and all that time they used no oxygen.

About half an hour after arrival he noticed in a very marked fashion that unless he kept his mind on the question of breathing, making it a voluntary process instead of an involuntary one, he suffered from lack of air. He had 30 cigarettes with him, and as a measure of desperation he lit one. After deeply inhaling the smoke he and his companions found they could take their mind off the question of breathing altogether ... The effect of a cigarette lasted at least three hours, and when the supply of cigarettes was exhausted they had recourse to oxygen, which enabled them to have their first sleep at this great altitude.

Take this study of coal miners https://www.ncbi.nlm.nih.gov/pubmed/2523477 it could be that smoking contributed towards their condition but it is also equally rational that many smokers just felt an immediate therapeutic effect as our mountaineering friends said.

The important point here is not whether smoking helped them, our mountaineering friends, to cope with less oxygen, although it may well have done as they clearly thought it did, the point is that they felt it did, hence possibly explaining the roughly double risk for bronchitis and emphysema for smokers in the above study.

Not the answer you're looking for? Browse other questions tagged smoking oxygenation biological-parameter or ask your own question.

13
Effect of cigarettes on passive smokers
10
Pulmonary diseases and oxygen therapy
18
Is "smokers lungs" a lie?
3
What effects does an oxygen saturation between 90% and 94% have on the body?
5
Why do female smokers often have creases above their lips?
4
Contraindications for administrating oxygen
2
What is a normal lower limit for blood oxygen (sp02)?