How long does it take to convert food into fat?

If I eat a very large meal, how long does my body take to convert the excess calories into fat?

There would be a lot of factors involved in this question; The rate of digestion, the rate absorption of GI tract, the rate of transfer from splanchnic circulation to the liver and other organs and the rate of metabolism of an individual in including different rates of different enzymes. But since OP is asking for "calorie to fat" we will limit it from glucose(since calorie is already a unit of energy)to fatty acids and Triglycerides.

During well-fed state or post-absorptive state, the body starts to either convert glucose into ATP/energy via glycolysis and citric acid cycle, into glycogen in liver or muscle or into fatty acids in the liver, kidney, adipose tissue etc.-excerpt from (NCBI)Food Intake and Starvation Induce Metabolic Changes 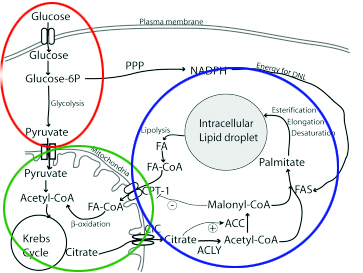 ...ratios and rates varies widely depending on the nutritional status...

-Citrate and the conversion of carbohydrate into fat. A comparison of citrate and acetate incorporation into fatty acids

It depends on several variables, nutrition, rate of metabolism of an individual, lifestyle and activity etc, but mainly the short term storage' glycogen stores' saturation. So as long as the glycogen stores are saturated, the body will start lipogenesis.

or 3.17 grams of glucose/carbs to produce 1 gram of fat

*when glycogen stores are saturated

*Some biochemistry textbooks say that 1 molecule of glucose yields between 36-38 ATPs. However, the amount of energy as ATP revolves around these numbers. According to Guyton, 1 ATP has ~12,000 calories (12 kcals). Thus 38 ATPs would have 456,000 calories or 456 kcals.

Not the answer you're looking for? Browse other questions tagged digestion weight calories body-fat or ask your own question.

2
Could refugees live off of oil and multivitamins (and maybe some protein)?
3
How does gallbladder removal affects fat digestion?
2
can I take pills before food?
0
Why does the calories from fat to total calories ratio not match the grams of fat to grams per serving ratio?
1
Does body recomposition cause the body to distribute fat differently?
2
Would a person with high body fat survive longer without food?