Ask Question
Asked 6 years, 1 month ago
Active 1 year, 1 month ago
Viewed 5k times
3
votes
Locked. This question and its answers are locked because the question is off-topic but has historical significance. It is not currently accepting new answers or interactions.

I've taken a pregnancy test in the morning on two different days and the result was a faint line both times. Does this mean the pregnancy test was positive or not? 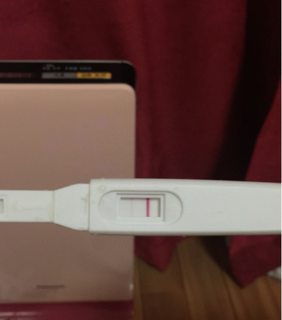 Any line, including a very faint line, is considered a positive result on home pregnancy tests. To be sure, you may want to wait a couple of days (2 or 3) and then take another test. If you are pregnant, then the line should become darker.

One of the commons reasons for a faint line on a pregnancy test is because you could be very early in your pregnancy. Home pregnancy tests measure the amount of the hormone human chorionic gonadotropin (hCG), which increases during the first few weeks of pregnancy, in the urine. It is possible that you are testing too early and the amount of hCG in your urine is not high enough to produce a full dark line. This can change in a matter of days, though. It is also possible that you have miscalculated when your period was due and tested too soon.

The pregnancy test itself could also cause a faint line. If your test has a low sensitivity, it would not pick up as low levels of hCG, and would return a faint line, rather than a dark one. You can usually check how sensitive the test is by checking the side of the box (note: a lower number is better). Your test could also have expired, causing it to not give accurate results.

Some medications do cause false positives on pregnancy tests, but you can rule this out yourself if you aren't taking any medications that raise hCG levels. It is also possible that you could have gone through a chemical pregnancy, a form of very early miscarriage, which would still cause a rise in hCG levels. Still, you should take another test in a few days, preferably with a more sensitive brand, and if you are still unsure about your results, you can consult your doctor.

My home pregnancy test showed a faint line. Am I pregnant?

Not the answer you're looking for? Browse other questions tagged obstetrics or ask your own question.

3
Any risk to the fetus if alcohol consumption in only 1~2 month's pregnancy
4
Can Smith-Lemli-Opitz Syndrome be caused by medication?
5
Using corticosteroids during pregnancy
11
What are the effects of routine and daily meditation and physical exercise on pregnancy?
5
Can pregnancy lead to growing taller?
0
Is it impossible to impregnate a woman during her period, and in the few days after?
7
Pregnancy and flying
3
Menstruation and emergency contraceptives