How does ones TSH tend to vary over the course of a day?

A single TSH (Thyroid Stimulating Hormone) blood test is commonly used to help diagnose thyroid problems, however my understanding is that the TSH tends to vary substantially over the course of a day, based on time of day (eg TSH is highest at about 5am, from memory).

Is there data and/or a chart available that illustrates typical variation over the course of a day for people with a healthy thyroid? How about for people with thyroid problems?

TSH has a quite important circadian rhythm.

Most of the original research on it is not freely accessible, as open access wasn't really a thing when these studies were done, in the 80s, but this one is freely available: Physiological variations in thyroid hormones: physiological and pathophysiological considerations. There is a section on circadian and seasonal rhythm and a table with some values. Quoting from the paper:

There is a clear circadian variation in circulating TSH concentrations in animals and in humans. TSH concentrations are low during the daytime, increase in the evening, and peak shortly before sleep. Amounts decline slowly during sleep. Table 3 summarizes studies of mean, nadir, and peak serum

They also mention that the nocturnal TSH secretion is weakened in people with hyperthyroidism.

The same is basically observed in hypothyroidism, see, for example Diurnal thyrotropin secretion in short-term profound primary hypothyroidism: does it ever persist?

In conclusion, diurnal rhythmicity in serum TSH levels was abolished in a uniform cohort of patients with short-term severe primary hypothyroidism.

or Circadian changes in pulsatile TSH release in primary hypothyroidism.

The nocturnal TSH surge was absent in six out of nine patients with overt primary hypothyroidism.

The circadian rhythm is weaker, different, or even absent.

While I have always had doctors recommend having TSH done in the morning, without eating beforehand, this doesn't seem to be a general suggestion. However, it's at least desirable to always have them done at the same time of day, to make values comparable:

TSH has a circadian rhythm (24 hour cycle) and levels peak between midnight and 6am. T3 has a similar circadian rhythm. It is therefore a good idea to have your thyroid tests done at the same time of day each time as your levels may differ at different times of the day.

This fact is illustrated by the following figure: 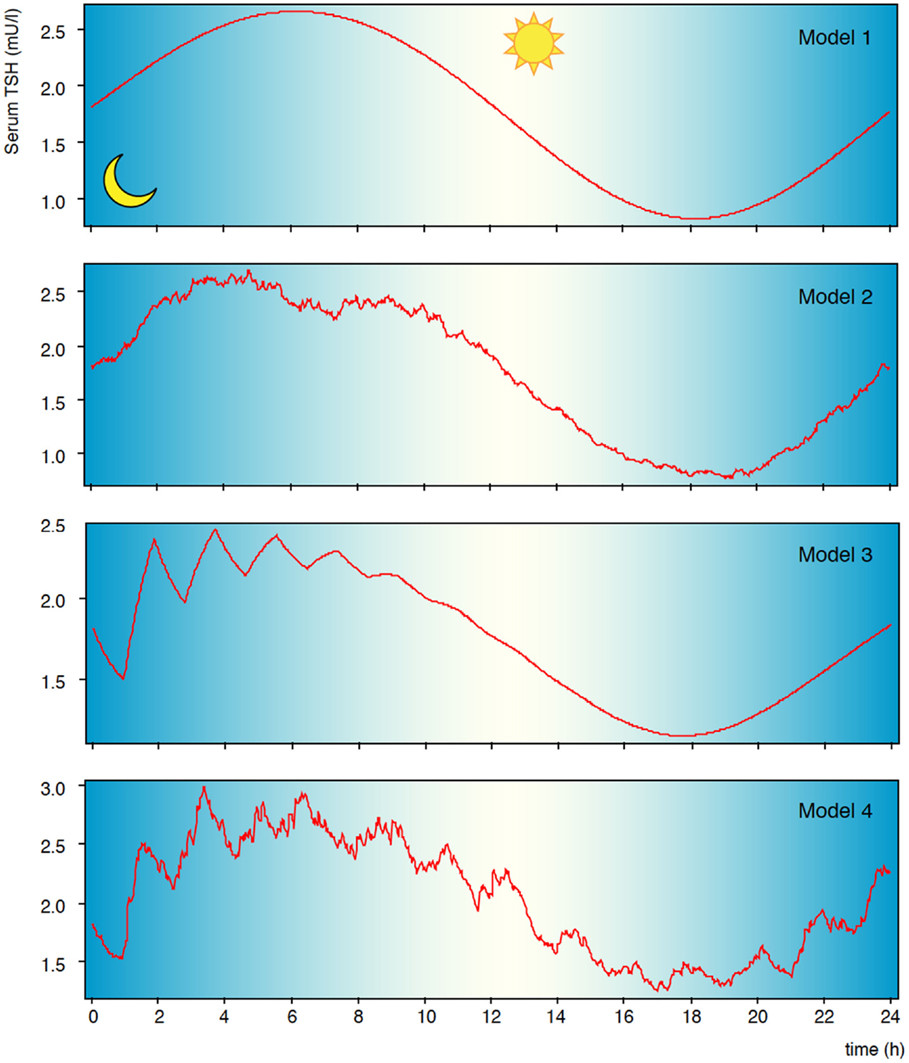 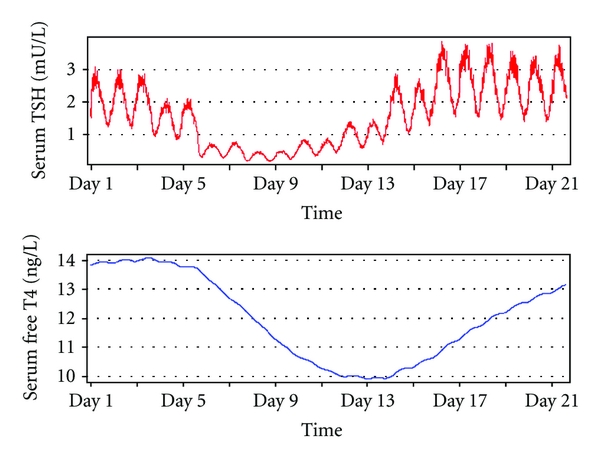 All time series were created with SimThyr 3.

Not the answer you're looking for? Browse other questions tagged blood-tests endocrinology thyroid or ask your own question.

1
How much melatonin does the body produce naturally per day?