What is the relation between age and cancer development probability? I have heard that cancer is rather rare at younger age groups.

Assuming it increases with age, is there a peak after which the probability declines?

Advancing age is the most important risk factor for cancer overall, and for many individual cancer types. According to the most recent statistical data from NCI’s Surveillance, Epidemiology, and End Results program, the median age of a cancer diagnosis is 66 years. This means that half of cancer cases occur in people below this age and half in people above this age. One-quarter of new cancer cases are diagnosed in people aged 65 to 74.

Lung cancer, breast cancer, and prostate cancer all have median ages of diagnosis between 61 and 70 years. That said, the NCI does note that some cancers occur more often in younger age groups, citing bone cancers (where the most at-risk age group is adolescents under 20) and leukemias.

The NCI also provides a bar graph showing the percentage of new cancers in various age groups, broken down mostly in ten-year increments: 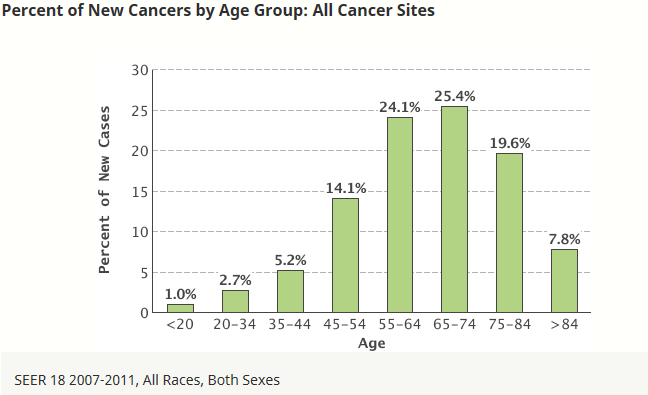 This would seem to indicate that your cancer risk goes down after about the age of 70. However, this is clearly misleading, because fewer and fewer people survive to reach these higher age groups. Thus, with fewer people in that group alive, there is going to be a significant drop in the percentage of cancers that occur in that group.

More accurate tables exist, which show the chance of developing cancer within a certain amount of time at a given age (data from 2010-2012). Table 2.12 in the linked document shows that the chances of developing cancer within 10, 20, or 30 years increases with age (although long-term data is not available for the higher age groups, as most people at the age of 80 do not live for 20 or 30 more years.

An interesting effect, though, is that the chance of ever developing cancer does change, increasing by small - negligible, even - amounts from the age of 0-30, and decreasing by the same small amounts from there, until there is a sharp drop-off at the age of 60. The table shows that if, for example, you're 70 years old, then you're less likely to get cancer during the rest of your life than someone 40 years old. The reason for this, of course, is more morbid: other diseases that are more common or more deadly in old age will set in at older ages. Less time to live implies less time to develop cancer.

I would assume that your question is better answered by the first statistic, rather than the second.

Not the answer you're looking for? Browse other questions tagged cancer statistics or ask your own question.

5
The pill and breast cancer
2
Eating vegetables rich in nitrogen, with fish, increases cancer risk?
11
Lifetime cancer risk for people with healthy lifestyle
6
How much are Acute Radiation Syndrome and cancer correlated?
6
Have candles been linked to cancer?
4
Why cancer is almost twice as likely in more developed countries compared with less developed countries?
4
How is hereditary cancer risk estimated?
0
Meaning of “(ref)” in a table describing the characteristics of patients taking part in a cancer study