What is this dot on the iris?

I have a black dot on my iris. Is there a medical term for this? Can it be dangerous?

It is difficult to tell from that photograph what the pigmented area represents; a good photograph of the iris is hard to get without a slit-lamp (an instrument for close examination of the eyes.)

Because irises are normally pigmented, they are subject to the same kinds of lesions as other pigmented tissue. The iris can have "freckles" (though not caused by the sun), pigmented moles, melanomas, etc. Because the iris is also composed of layers, an absence or indentation of part of the outermost layer of the iris (called a crypt) can be spot-like in appearance.

The following is a photograph of a benign nevus (mole) of the iris: 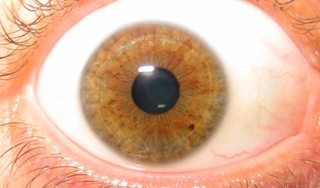 Iris nevi are, by definition, pigmented and flat. They are common, may be multiple, and occur more often in blue-eyed patients. Iris nevi are also rarely present at birth and like all other ocular nevi become apparent around puberty.

The following is of an iris nevus taken through a slit lamp: 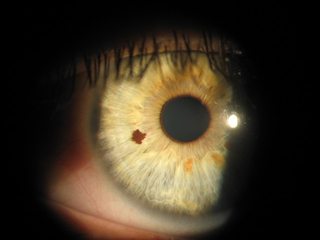 Here, you can also see freckles on the iris.

Lesions in the iris can also be caused by trauma, congenital abnormalities, illnesses, infections, etc.

Iris melanomas can also occur, and arise from iris nevi. Usually they are low-grade tumors, but can be problematic to vision/ocular health, and can become metastatic.**

While the lesion shown in the photograph is statistically likely to be a benign iris nevus, it is impossible to say. The safest course of action is to ask your doctor what it is (even a good office opthalmoscope will afford better visualization that the photograph) and if it needs to be checked further.

**Considerable controversy exists regarding the histopathologic classification and the malignant potential of iris melanomas.

Not the answer you're looking for? Browse other questions tagged optometry iris or ask your own question.

11
What are the different eyesight measures and how are they related to each other?
9
What is the distribution of corrected visual acuity?
2
What effects would aspheric contact lenses have on eyes without astigmatism?
1
Wearing under corrected diopter diving mask (hyperopia)