High levels of alcohol consumption during pregnancy can be harmful which can develop physical and mental defects in a fetus.

When you drink, alcohol passes from your blood through placenta to a baby and can stunt fetal growth, facial deformities, damage neurons and brain structures which can result in intellectual disability and also cause other physical damage. A baby's liver is one of the last organs to develop fully and doesn't mature until the latter stages of pregnancy, so cannot process alcohol. So if you drink at any time during your pregnancy, the alcohol can affect your baby.

While the effects attributed to alcohol are still more common in heavier drinkers, they seem to happen at much lower drinking levels than seen in those with FAS.

The most severe of the alcohol-related conditions (due to heavy drinking) is Foetal Alcohol Syndrome (FAS). It causes: 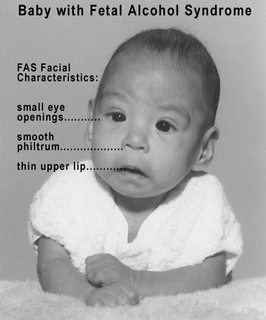 Children with FAS have distinct facial features including: small and narrow eyes, a small head, a smooth area between the nose and the lips and a thin upper lip.

They also show the following symptoms:

FASD (Foetal Alcohol Spectrum Disorders) is the umbrella term used to describe the conditions that occur in people who have been diagnosed with some, but not all, of the symptoms of FAS. It is more difficult for a specialist to diagnose FASD than it is FAS, because children with FASD may not have facial deformities. However the following symptoms can show up:

The UK's Department of Health recommends that if you're pregnant you should avoid alcohol altogether.

The National Institute for Health and Care Excellence (NICE), which advises healthcare professionals (GPs and nurses), advice pregnant women to:

Drinking alcohol can have some detrimental effects. While someone is pregnant, binge drinking of alcohol is very dangerous, while mild-to-moderate is more safe, but still not advised.

"When a pregnant woman drinks alcohol, so does her baby."1 Drinking alcohol during pregnancy raises the risk of miscarriage, stillbirth, and some physical and mental disabilites known as Fetal Alcohol Spectrum Disorders (FASDs). Children that develop FASDs are at risk for a variety of problems, such as facial defects, smaller body size, intellectual/learning disabilities, behavioral problems, and some problems in the body (vision, hearing, and organ problems).

A meta-analysis of over 30 studies on this topic found that binge drinking causes a higher risk of FASDs in children. Moderate drinking can also be dangerous, though, and it is recommended that pregnant mothers don't drink any alcohol. "The results of this review highlight the importance of abstaining from binge drinking during pregnancy and provide evidence that there is no known safe amount of alcohol to consume while pregnant."2

It is recommended that mothers abstain from drinking while pregnant, even mild drinking. Why take the risk?

[1] CDC - Alcohol Use in Pregnancy

[2] The association of mild, moderate, and binge prenatal alcohol exposure and child neuropsychological outcomes: a meta-analysis

14
Is smoking during pregnancy harmful to child and mother?
3
Any risk to the fetus if alcohol consumption in only 1~2 month's pregnancy

14
Is smoking during pregnancy harmful to child and mother?
9
What is the effect of smoking before or during early pregnancy on the baby?
3
How to treat a pregnant woman with a very low platelet count in her 9th month of pregnancy?
3
Any risk to the fetus if alcohol consumption in only 1~2 month's pregnancy
5
Using corticosteroids during pregnancy
11
What are the effects of routine and daily meditation and physical exercise on pregnancy?
5
Can pregnancy lead to growing taller?
4
Are there any long term health risks for a woman (and/or her children) when using hormonal birth control?
7
Pregnancy and flying