There is a popular perception, and many marketing claims, that organic produce (and food in general) is healthier than food grown with conventional methods.

Most commonly, the reasons given are: less or no pesticide use, lack of synthetic/chemical pesticides and herbicides, no artificial growth hormones, genetic modification, or other "interference" with nature, and higher nutritional content due to better soil conditions and better/natural fertilizers.

Are there any studies that back up these claims?

TL;DR - Organic foods don't seem to have a significant difference as of what studies can prove, which is why conventional or organic, people should make sure they're getting the proper nutrients that their bodies need.

The first recorded use of insecticides is about 4500 years ago by Sumerians who used sulphur compounds to control insects and mites, whilst about 3200 years ago the Chinese were using mercury and arsenical compounds for controlling body lice. In the 1920s there were even cases of using arsenic, which was replaced by DDT usage until the new chemical was discovered to have severe consequences (harm to non-target plants and animals as well as problems with residues). DDT is linked with cancer, endocrine disruption, and reproductive and developmental effects. Over time, people began to switch to organic pesticides to get away from the health scares (or threats) of these synthetic chemicals.

To address the question, we should first be clear about what organic means.

Contrary to what most people believe, "organic" does not automatically mean "pesticide-free" or "chemical-free" ... it means that these pesticides, if used, must be derived from natural sources, not synthetically manufactured.

Regarding Farmed Meats (some of the key requirements):

Organic food covers a wide variety of techniques and different types of foods that all have their own types of legal loop-holes, or possible work-around strategies.

There are many pesticides that are naturally produced by plants which farmers use, but that doesn't mean they aren't dangerous. In contrast, just because a pesticide is synthetic doesn't immediately indicate that it's more dangerous than natural products. Some pesticides that are approved by the government may be harmless in small quantities, but when organic producers attempt to refuse these, they may turn to alternatives that are even more dangerous, just to keep the label "organic".

In another case, farmers could claim "natural methods are insufficient to address critical issues of production", and then treat their animals with antibiotics while still calling the meat organic.

On the other side of this issue, some people argue that the less chemicals we consume in general, the better. Even if they might be government approved, that doesn't prove they're completely non-toxic.

The Stanford paper claim that there just isn't enough evidence to prove a significant difference in health benefits/risks. They don't necessarily have more nutrients, decrease the risk of any diseases, or have higher nutritional content except for phosphorus, which most people get enough of anyways. However, the study does suggest organic foods contain less pesticides. The health risks of consuming less pesticides though, are still contested. "Additionally, organic chicken and pork appeared to reduce exposure to antibiotic-resistant bacteria, but the clinical significance of this is also unclear."

Well what about taste?

It's nearly impossible to give a definitive answer of which tastes better. To pile onto the confusion, it's possible that the taste differences touted by some may simply derive from a "health halo".

In response to the scares involved with pesticides in general, people began to research methods to minimize the amount of pesticide used. Basically, DNA from an external source is inserted into a plant so that the plant inherits some desirable traits. This allowed plants to develop natural immunities to certain bacteria and produce more or bigger produce. Over time, people became scared of GMOs as too good to be true. For the most part, scientists agree that GMOs pose no greater risk than conventional food (Expert evaluations from Europe found no verifiable toxic or deleterious effects from GM foods and crops). There are still legitimate concerns about using GMOs, such as allergy development in humans, toxicity levels of naturally produced pesticides in the plant, and antibiotic resistance of bacteria, but for the most part these are tested before distribution. Public wariness may be influenced by labels and commercialism.

Organic farming is good for the environment in the sense that it often leads to less pollution. Pesticides on crops often run-off into streams and rivers, interfering and even hurting local wildlife, but with organic pesticides, the chemicals decompose faster before they can cause massive change to their environment. There may be other potential benefits, but to feed the immense population that exists on earth, many debate whether organic farming is truly sustainable.

"Healthier" depends on the context of the food:

How much pesticide is being used? How much exposure becomes a detriment? Does it have long-term consequences? What are the loopholes that producers are using?

So when you say "organic" and "conventional" it really depends on the process, producer, and product- all of which need to be studied in more detail to develop solid claims.

In Mathematics, the Annals of Mathematics is the most sought after journal to have your research accept to. The article of research on this topic I am presenting was published in the Annals of Internal Medicine. However, I don't know if it carries the same weight. If it does, then we can rest assure that this research was meticulously scrutinized and still was able to earn a spot in the journal.

in Are Organic Foods Safer or Healthier Than Conventional Alternatives? A Systematic Review.

This was a non-funded study so sponsorship bias shouldn't play a role in the outcome of their work. The researchers collected data from MEDLINE, EMBASE, CAD Direct, Agricola, TOXNET, Cochrane Library, and bibliographies of retrieved articles from 1966 to 2011.

The studies findings on Vitamin and Nutrient Levels by Food Origin:

Consumers purchase organic foods for many reasons. Despite the widespread perception that organically produced foods are more nutritious than conventional alternatives, we did not find robust evidence to support this perception. Only phosphorous demonstrated superiority in organic foods... although it is unlikely to be clinically significant because near-total starvation is needed to produce dietary phosphorous deficiency.

The researchers also admit to their own publication bias:

Studies were heterogeneous and limited in number, and publication bias may be present.

Finally, the Mayo Clinic appears to stand by the research given in this article [2].

The more healthy can be defined in terms of nutritional value, sensory quality, and food safety.

As we know the potential long-term health effects of exposure to pesticides can include: cancer, neurotoxic effects and many morewiki, because the pesticides needs to be toxic to kill pests. However under the FQPA, EPA has the authority to ensure that all pesticides meet the safety standards by setting permittable tolerance levels and it's testing carcinogenicity of chemicals as part of the Carcinogenic Potency Project.

Washing and peeling conventional fruits and vegetables has only limited effect by reducing the levels of pesticides only from the surface as per USDA test data1999, but some plants can absorb pesticides systemicallyEWG.

Older studies comparing different type of foods were inconsistent. For example study from 2002 showed no strong evidence that organic and conventional foods differ in concentrations of various nutrients and microbiological contamination.

The more recent study from 2006 of comparison of chemical composition and nutritional value of organically and conventionally grown plant showed that organic crops contain a significantly higher amount of certain antioxidants (vitamin C, polyphenols and flavonoids), higher dry matter content and minerals with lower level of pesticide residues, nitrate and some heavy metal contaminations. Therefore there is is a relationship between these two plant production systems and the nutritional composition of crops2006.

Consequently, it can be concluded that organically produced plant derived food products have a higher nutritional value, including antioxidants than conventional ones. Furthermore, due to the fact that there is a lower level of contamination in organic crops, the risk of diseases caused by contaminated food is significantly reduced.

Additionally, the frequency of occurrence of pesticide residues was found to be four times higher in conventional crops, which also contained significantly higher concentrations of the toxic metal Cd.

The summary of this meta-study and antioxidant activity in ORG/CONV food can be shown in the following figures: 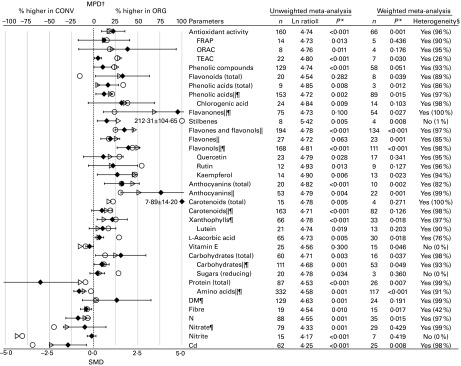 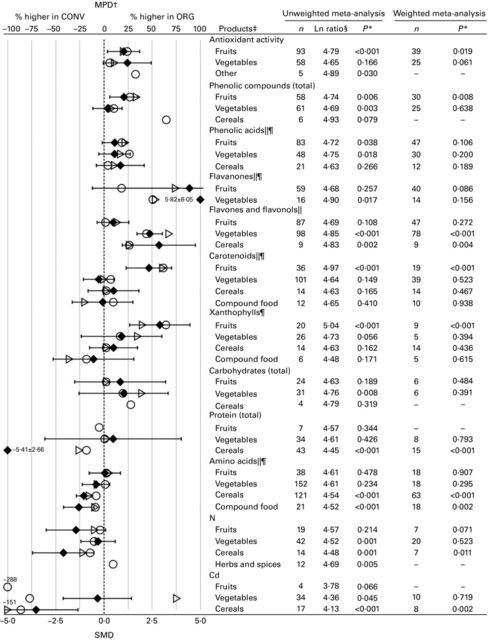 Based on above we can say that organic foods are more healthy than the conventional ones, because of:

However it can vary on agronomic practices/protocols and soil pollution which can affect crop composition.

Short answer: YES, and there's a quite strong scientific evidence about it.

The importance of review articles

In order to avoid cherry-picking of studies supporting one opinion I have only quoted the review articles (= publications that summarize the conclusions of hundreds of other studies).

Some studies have concluded that there's "no evidence of a difference in nutrient quality between organically and conventionally produced foodstuffs" (4). Probably this is due to the smaller base of evidence, as stated by Baranski et al. 2014 (3) that relies on 343 publications.

Dangour et al. 2009, that relies on 55 studies, agrees on higher phosphorus content of organic crops, but doesn't detect any difference in the other nutrient categories. (4)

Lester-Saftner 2011 doesn't explicitly mention the number of articles it relies on; the "references" section is made of 66 articles. It shares most of the findings with other studies, except for heavy metals and B-complex vitamins. (2)

Smith-Spangler 2012, based on 223 studies, identifies some evidence for the superiority of organic foods, but considers it limited, not robust enough. (6)

Notes about GMOs and environmental sustainability

The field of study is very wide, consensus is not reached and a correct answer would require a separate thread only dedicated to this topic. As you ask in your question about this topic, I shortly list some notes catched from a good study (7) that can be used to get a quick idea about the issue:

Not the answer you're looking for? Browse other questions tagged diet nutrition or ask your own question.

17
Side effects of genetically modified food products
5
How much pesticide remains on a harvested organic fruit?