Maximum time after fertilization, after which pregnancy test no longer works

I am wondering if there is a maximum time after fertilization, after which a pregnancy test no longer works.

On the internet, I can find lots of questions and answers around how early after fertilization a pregnancy test could be positive.

My question is different: what if fertilization happened say 35 days ago. Would a pregnancy test still have good positive predictive value? Do pregnancy tests no longer work after a certain amount of time? How would one test for pregnancy after that time?

The tests work until after full-term.

The urine and blood tests both rely on detecting the same factor being present, human chorionic gonadotropin. The tests continue to work fully in all cases of pregnancy, including ectopic until after giving birth. Even towards the end of term when the levels have dropped significantly (see week 12 onwards: table below), they still remain as much as 20,000 times higher than those of a non-pregnant female: 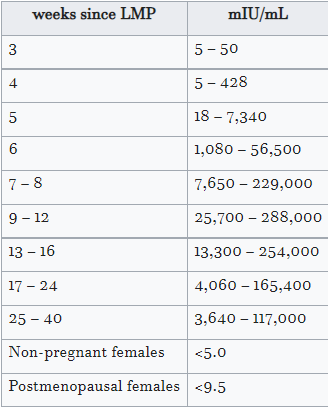 In the case where hCG passes the threshold for pregnancy but there is doubt about actual pregnancy - an ultrasound is used to detect implantation. If none is detected in the womb, then ectopic pregnancy is suspected and scanned for. Again if none is detected, further tests would be done to eliminate alternative causes.

Not the answer you're looking for? Browse other questions tagged obstetrics pregnancy-test or ask your own question.

10
How long will it take to show the signs of pregnancy after intercourse
7
Which of these things is needed for a first time pregnancy checkup?
3
Any risk to the fetus if alcohol consumption in only 1~2 month's pregnancy
3
Faint line on pregnancy test