How does colloid pressure help in maintaining fluid inside blood vessels?

I learned in my physiology course that hydrostatic pressure is the pressure that fluids put on the wall of blood vessels and therefore, the fluid tends to get out of the blood vessel and that makes sense to me.

But when I learned about the colloid pressure it says that it is the pressure the proteins in the blood (like Albumin) make to maintain the fluid inside, but I don't know how this is done or what is the mechanism behind it, is it chemistry-related?

Web sources all explain that colloid pressure is a pressure made by plasma protiens to hold water inside blood vessels but never explained how it is done, just like in this article:

Colloid osmotic pressure (COP), the osmotic pressure exerted by large molecules, serves to hold water within the vascular space. It is normally created by plasma proteins, namely albumin, that do not diffuse readily across the capillary membrane. Inadequate COP can contribute to vascular volume loss and peripheral edema. Normal COP is approximately 20 mmHg. Patients with COP values less than 15 mmHg are at risk for peripheral edema. The correlation between the refractive index of infused synthetic colloids and COP is not known. Therefore changes in refractive index cannot be used to monitor colloid administration. COP can be measured directly with a colloid osmometer; however, it is not commonly done because using the machine is labor intensive (see Chapter 64, Daily Intravenous Fluid Therapy).

As you have hopefully learned in class, fluid homeostasis in the human vascular system is a balance between two major forces. The hydrostatic pressure and the osmotic pressure. 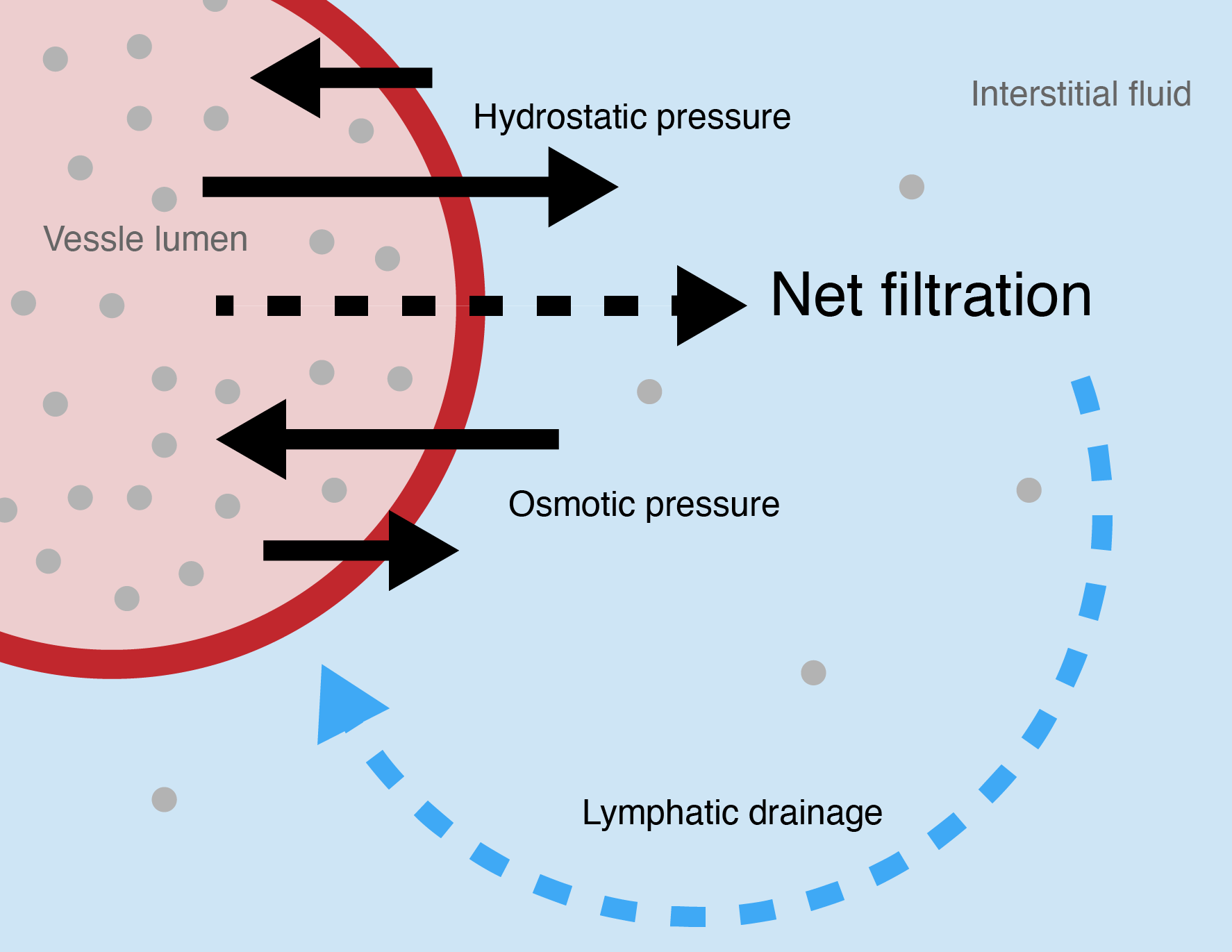 As the StatPerls on colloid osmotic pressure notes:

The major reabsorptive force in this system comes from the colloid osmotic pressure within the capillary, normally around 24 mmHg

In an excellent review about albumin, Fanali and colleague provide some interesting facts about this vitally important protein (2011 PMID 22230555):

[Albumin] makes up 50% of the protein present in the plasma of normal healthy individuals, is the main determinant (80%) of plasma oncotic pressure... Albumin is predominantly an interstitial protein with concentration of about 3 × 10−4 M and a total mass of approximately 160 g. ... The concentration in the plasma is about 7 × 10−4 M and the intravascular mass is about 120 g. Albumin circulates from the blood across the capillary wall into the interstitial compartments, including cerebrospinal fluid, and returns to the blood through the lymphatic system with a circulation half-life of approximately 16 hours.

Albumin is responsible for 80% of the oncotic pressure of plasma (25–33 mm Hg). ... About two thirds of this pressure is represented by the simple osmotic pressure, to which albumin contributes disproportionately because its molecular mass of 67 kDa is lower than that of the average of the plasma globulins, about 170 kDa (Peters, 1996). The other third arises from the Donnan effect essentially due to albumin and its low isoelectric point, which gives to the protein a global negative charge at physiological pH (Figge et al., 1991, Peters, 1996). However, albumin is also the predominant protein in the interstitium, contributing to the interstitial colloid osmotic pressure.

Michelis and colleagues expand on the second effect:

[Albumin's] negative charge also plays a role in colloid osmotic pressure maintenance, by attracting cations such as sodium (Na+) and causing water molecules to shift across the semi-permeable capillary membrane into the intravascular space.

OK, but how does this actually work?

I am not an expert in osmosis, but it seems that the answer is "no one knows for sure".

A very interesting manuscript by Borg (2003. arXiv:physics/0305011) presents a number of competing theories of osmosis. However, none of them are able to fully explain how this process actually works.

Many of the "explanations" for osmosis try to explain osmosis in terms of a single mechanism, such as diffusion due to a presumed water-concentration gradient. None of the mechanisms considered seem as such to be instrumental in making the osmosis happen.

Not the answer you're looking for? Browse other questions tagged physiology homework or ask your own question.

7
How does the Jendrassik's manoeuvre reinforce reflexes?
4
"Blood rushing to the head" during handstands: How is it regulated?
1
What is the functional difference between cardio-pulmonary and the baroreceptors in the regulation of Blood pressure?