"On ultrasound a gallbladder polyp is seen as an elevation of the gallbladder wall that protrudes into the lumen. (...) A clearly infiltrating or large mass should be treated as a gallbladder cancer rather than a polyp." source

Ultrasound images look pretty ambiguous to me and I can't imagine it being easy to tell when it is just a polyp and when it is cancer. So what I wonder is: How early can one distinguish between polyps and cancer with ultrasound imaging? Or to ask the question the other way around: can one see on ultrasound that it is cancer and not a polyp before the cancer becomes that big that it has spread somewhere else in the body? Or is it already too late when one can clearly see on the ultrasound that it is cancer?

Besides the good source provided in the answer, to me the following part of the comment answers the question: "You are certainly right that gall bladder is usually diagnosed in later stages, but ultrasound is not able to distinguish between small benign polyps and small polyps that are already cancerous.". The source in the answer says "When the size cut-off point was set to 10 mm, sensitivity and specificity of predicting neoplastic polyps were 54.5% and 94.1%, but when it was 8 mm, they were 63.6% and 85.9%.". The sensitivity is poor - at least in my field. Meaning: on a population level the guidelines make perfectly sense but on a individual level the risk of 1% having cancer may lead to another evaluation and consideration of a removal.

Gallbladder cancers can only definitely be diagnosed or ruled-out with a biopsy. However, as biopsies are an invasive procedure, you can‘t just biopsize everyone routinely to check for gallbladder (and other) cancers. Instead, we need screenings and risk factors to threshold patients into those where a biopsy provides more benefit than harm, and into those where biopsies would be more harmful.

In your source, there is a nice flowchart that illustrates this principle: 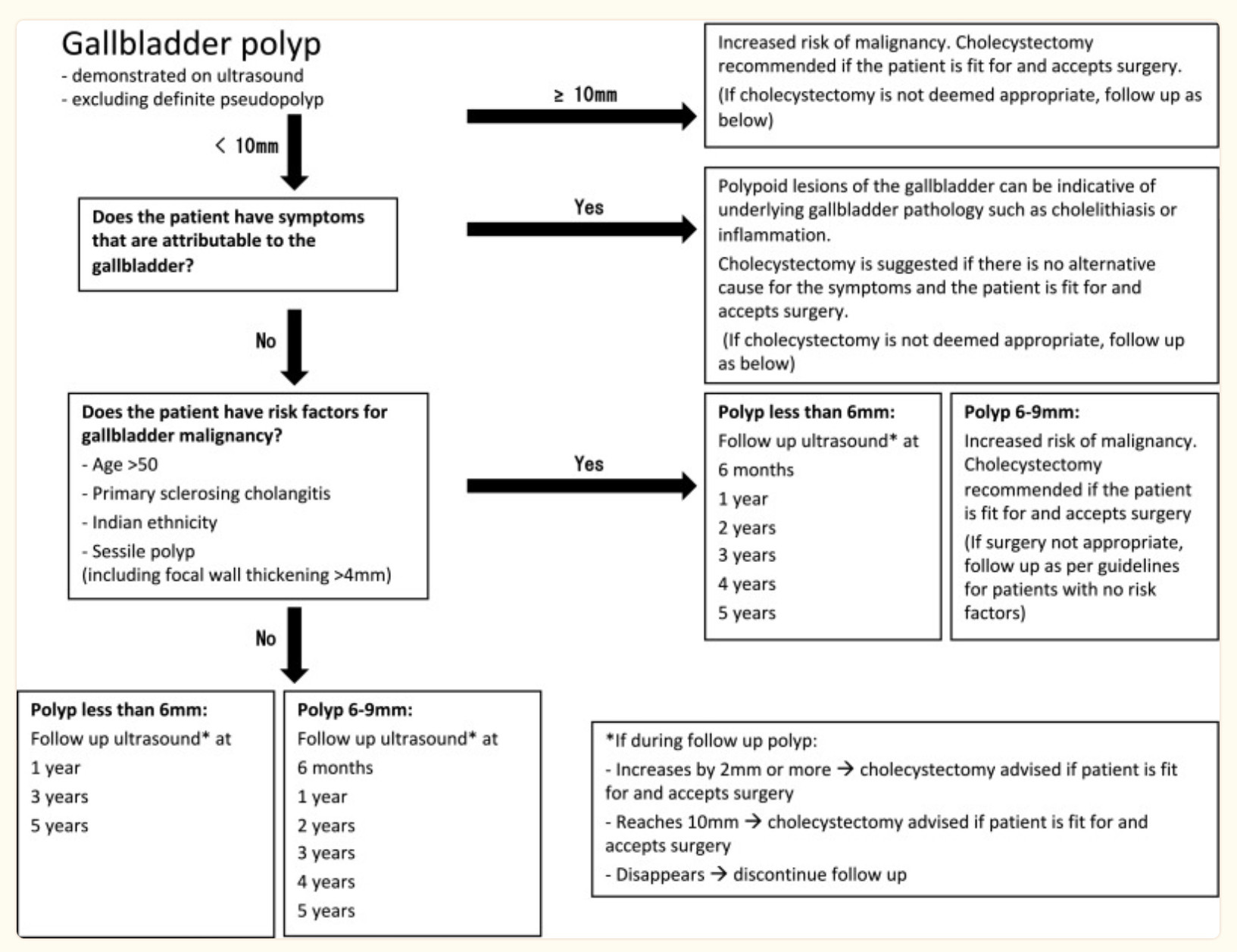 Whenever cholecystectomy is recommended, this means removing the entire gall bladder and giving it to the pathology department for them to analyse whether it shows signs of malignancy.

If a malignancy (=cancer) is found, this will then further be staged, where the pathologists look at the local infiltration of the Tumor into nearby tissue (T), the affected lymph nodes (N) and distant organ metastases (M). As soon as local tissue is degenerated, it is considered gall bladder cancer.

To answer your second question, large polyps (>10mm) are 22 times more likely to be cancerous than smaller polyps (<10mm), but of course there is a possibility that small polyps are already cancerous or become cancerous later on. Currently, scientists think that on a population-level it does not make sense to biopsize small gallbladder polyps. However, this means that maybe for the 1 individual in 100 with a small gallbladder polyp which will become cancerous, treatment starts later than optimally. However, if we biopsize all gall bladder polyps, we have 99 individuals where we unnecessarily operated them. [Number loosely based on the above linked publication, where 15 polyps < 10mm out of 1559 polyps were later diagnosed as cancer]

Not the answer you're looking for? Browse other questions tagged cancer radiology differential-diagnosis ultrasounds gallbladder or ask your own question.

4
Advanced lung cancer spreading areas
2
Why can one not simply remove gallstones, not the whole gallbladder?
1
What education background is generally required in order to understand and study advanced topics in cancer?
8
Why after 140 years, is the primary surgical treatment for gallstones to still just chop out the gallbladder?
4
How often is endoscopic ultrasound done to check for gallbladder disease?
2
If screening for a disease is not recommended, should someone with positive findings take further action?
3
Is there a cancer treatment method that uses a poison and an antidote?
5
Does the Sievert unit account for how concentrated the radiation dose was?
3
How do doctors go about diagnosing uncommon diseases?