Why do neurostimulators for DBS need to be implanted?

I'm sure there has to be a good explanation, since the current IPG approach seems to be the only one in existence, but I can't for the life of me figure it out.

neurology brain
Share
Improve this question
asked May 2 at 11:32

TL;DR: Placing it in the chest or abdomen actually makes perfect sense.

There are several reasons why your ideas won't work, at least with current technologies.

why not either a) have the pulses be generated directly adjacent to the electrodes, instead of having the IPG somewhere in the chest or the abdomen

Because IPGs are the size of pacemakers, and you can't put an object that large inside the skull. There is no spare room inside the skull, so it would displace brain tissue, possibly causing injury, and it would be a much more difficult surgery with much higher risks. I would imagine that placing a tiny electrode and wire deep in the brain is difficult enough, but placing a device the size of an iPod would be vastly more difficult and dangerous.

Thanks to pacemakers, putting it in the chest or abdomen is perfected surgery that's performed hundreds of times a day worldwide in an outpatient setting with very low risk and an easy recovery. It makes perfect sense to put it there. 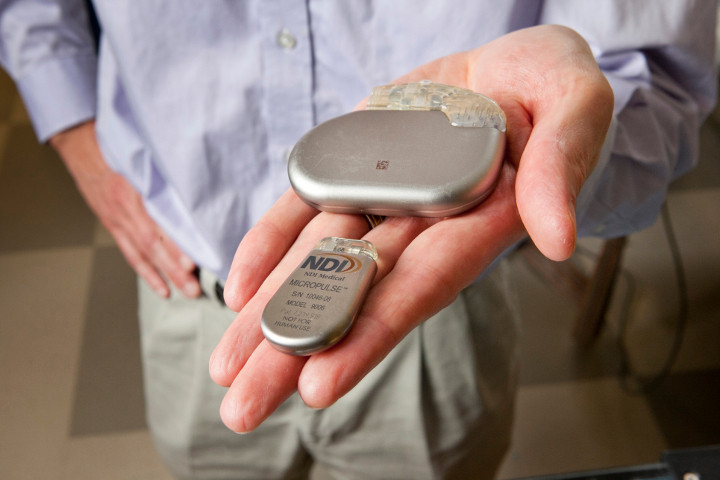 or b) have the neurostimulator on the body instead of in the body, with the leads going transcutaneously to the electrodes?

This is addressed in comments by two people:

Not the answer you're looking for? Browse other questions tagged neurology brain or ask your own question.

4
Deep brain stimulation for Parkinson's Disease
2
Why aren't children affected by pins and needles as much as adults?
6
Why can't surgeons operate on nerves?
0
Why does Delayed Post-hypoxic Leukoencephalopathy (DPHL) have a biphasic clinical course?
0
Myasthenia Gravis and preserved deep tendon reflexes, why?