How long on average would a type 1 diabetic survive without insulin injections, given that their remission phase has long since passed?

I've been trying to find information on how long a type 1 diabetic would survive without insulin injections.

Most of the information I've found deals with recently diagnosed patients, who show remarkable signs of remission. Instead, I'm asking specifically about long term diabetics, whose brief remission or "honeymoon phase" can safely be assumed to have long since passed. The best I have found states that one would be likely to start seeing signs of ketoacidosis within 24 to 48 hours.

For example, this Healthline article quotes a doctor, Silvio Inzucchi:

I will see that in someone with 0% insulin production, they’ll begin to fall ill within 12-24 hours after their last insulin injection, depending on its duration of effect. Within 24-48 hours they’ll be in DKA. Beyond that, mortal outcomes would likely occur within days to perhaps a week or two. But I could not see someone surviving much longer than that.

This is definitely a good starting point, but days to weeks is pretty vague.

I recently got into a fairly heated discussion with an acquaintance about this. He was completely convinced that I could survive without insulin, if I just "took better care of myself". I got the impression that he believes that the difference between type 1 and type 2 is that anyone needing insulin injections is type 1, and that type 1 could actually "revert" to type 2 with exercise and a proper diet.

I have no doubts that a type 1 diabetic needs regular insulin injections, especially since I myself have experienced the consequences of both overdoing it and of both forgetfulness and failing insulin pumps. But his objections still got me wondering, how long on average one could be expected to survive without insulin?

Providing an accurate measurement of how long it would take for death to occur after cessation of insulin in an individual who intrinsically makes no insulin is not feasible. This is because such a medical research study would be ethically unacceptable. Any researcher would be obligated to provide insulin.

Natural History of Lack of Insulin

However, you are absolutely correct that individuals with type 1 diabetes cannot simply "take better care of themselves" to avoid their insulin requirement. Autoimmune destruction of the insulin-producing beta cells of the pancreas prevent the individual from making endogenous insulin. As Yukdin (2000. PMID 10752719) notes:

Three quarters of a century after its discovery, insulin is not routinely available in many parts of the developing world. ... In consequence, the life expectancy of a child with newly diagnosed type 1 diabetes in much of sub-Saharan Africa may be as short as 1 year.

Thus, even the early "honeymoon phase", lack of access to insulin is routinely fatal.

In reality, however, individuals with type 1 diabetes come to clinical attention once pancreatic insulin secretion reaches a critical non-zero threshold. As Steele and colleagues (2004. PMID 14747294) note:

With time, all individuals with type 1 diabetes are thought to lose insulin production.

Here is a graph from their paper showing decreased insulin production following diagnosis. 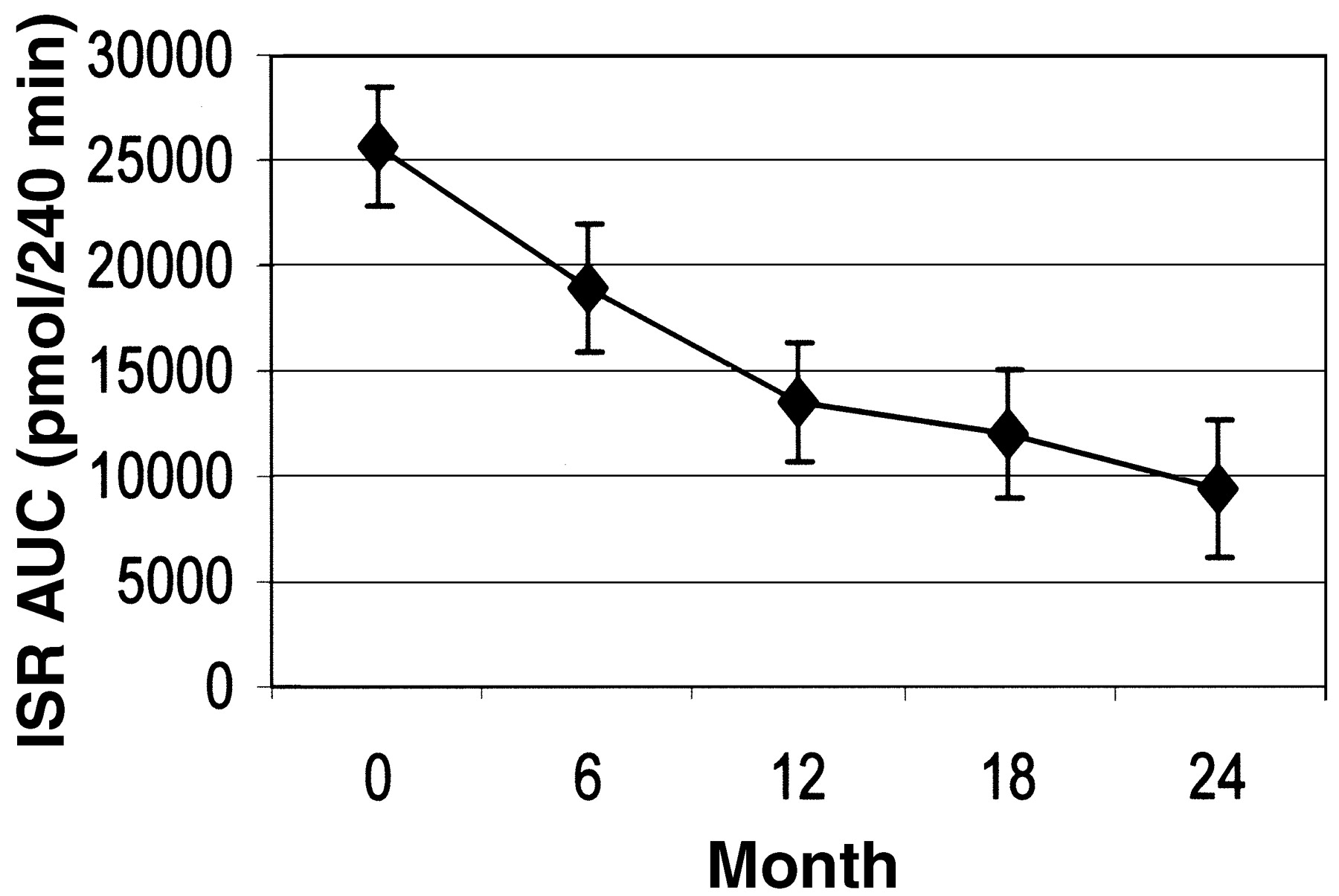 Thus, how long an individual could survive is likely also correlated to their residual insulin secretion which may be present many years after their diagnosis.

Results of Abrupt Cessation of Insulin

However, an interesting study by Keller and colleagues (1993. PMID 8421367) does provide us a window into what the natural history might look like. In their study, they reviewed cases of prisoners in the New York City prison system who were not provided access to their life-saving insulin therapy. Here is an excerpt of a table from the study:

As you can see, in an average of just 3 and a half days, the prisoners were ill enough for hospitalization, many of them critically.

Cause of Death in Untreated Type 1 Diabetes

The life threatening complications of untreated diabetes are diabetic ketoacidosis and hyperosmolar hyperglycemic state. These conditions result in hyperglycemia, ketone production, elevated plasma osmolality, sodium and potassium derangements, and proinflammatory state. With modern therapy, the ultimate cause of death is most frequently cerebral edema (Lizzo et al 2021. NBK 560723). However, historically, vascular thrombosis and hypovolemic shock were also felt to be important causes of mortality (Clements and Vourganti 1978. PMID 102504)

Overall, patients with type 1 diabetes and no endogenous insulin production definitively require insulin therapy to sustain life. They will require hospitalization in approximately 3 and a half days on average. How long they might survive after the onset of diabetic ketoacidosis or hyperosmolar hyperglycemic state is difficult to determine and likely varies due to the variety of underlying pathologies which might result in mortality and potentially the degree of residual insulin secretion.