What is the error on various body fat percentages?

As a scientist, I'm curious what the error is on these. The linked page reports a BFP out to the tenths, which is claiming that they can calculate almost down to an ounce (~10 g) how many pounds of fat there are on someone's body. That seems like too high of precision.

Of course, these don't converge, there's almost 4 lbs (2 kg) of difference between these metrics when I multiply my BFP by my weight.

So, how much error do these measurements have?

I don't know if there are canonical references for these measurements. I've found a couple references that seem good enough for an order-of-magnitude estimate, though.

Latour et al compare gold standard estimates with Dual Energy X-ray Absorptiometry (DEXA) with US Navy-style estimates based on circumference. There are some differences according to how exactly circumference is used in the US Navy method, and differences for men versus women, but overall standard error of estimate ranged from 3.42-4.21%, in absolute percentage points, with Pearson correlations between methods ranging from .732 to .819. However, there was also an offset in their sample; the mean DEXA for men was 19.3 versus 16.1 using the Navy method, and DEXA for women was 26.9 versus 27.5 using the Navy method. This could reflect systematic differences in the population that the Navy estimates were based off of versus the study population in this study's sample.

This study compared BMI and DEXA estimates and found a standard error of estimate of 4.6% in a regression with BMI only, and 4.3% including age; they also found a standard error of estimate of 4.4% using waist circumference (again, as far as I can tell these are all absolute measurements and assume normality of residuals). This is using an in-sample estimate of the correlation again, though, so you might expect errors to be greater in another population.

I think you'll find that these errors are large compared to the range of interesting variation in body fat. It seems that these estimates tell you very little compared to what would otherwise be apparent from visual inspection. BMI rather notoriously fails when applied to athletes and bodybuilders, for example, who can clearly be observed to have low body fat, whatever a BMI measurement would suggest.

In closing I wanted to again emphasize that these are absolute percentages, so if you estimate body fat % to be, say, 20%, and error is 4%, you would say that within 1 standard deviation you're looking at a range of 16-24%.

Frankenfield and colleagues reported an immense variation between BMI and BFP below a BMI of 30 (obese, or 25% BFP in men and 30% in women according to the same study). 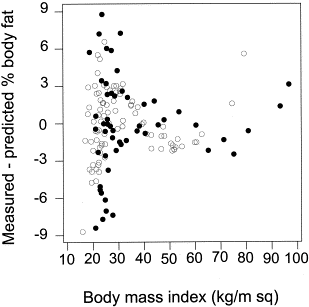 From this graph we can also estimate that the SD of the measurement error is 3-4.5 absolute percent, which aligns neatly with Bryan Krause's answer, which is large relative to the range of BFP values of under 25/30%.

Bowden and colleagues used DEXA as the gold standard in a sedentary sample. They similarly found a correlation of r=.551 for BMI and DEXA. They provided enough stats in their paper I was estimated the SD of difference between the BMI method and the DEXA measurement as 7.5% in men and 8.1% in women which is nearly half the BFP measurements of the skinniest participants, although my analysis was constrained by lack of information, and the true value is probably smaller.

They also calculated a linear model regressing DEXA on skin fold (SF) and biolectrical impedance analysis (BIA), finding similar values (although the SE of the regression isn't the same as the SD of the difference):

12
Is there an optimal body fat percentage?
3
Which kind of muscle has greatest resting metabolic rate; big muscle, or strong muscle?
3
Values of Body Hydration Values to calibrate the readings of Galvanic skin response sensor
1
Does body recomposition cause the body to distribute fat differently?
4
Would excess body fat provide a significant survival/longevity advantage in a situation of sudden starvation?
2
Would a person with high body fat survive longer without food?