Is high metabolism a problem?

I got a scale that takes a lot of measurements through bioimpedance. It has an accompanying app called OKOK.international, and when you upload your height, age, and gender on their app, it shows what's your fat percentage, muscle weight, lean body mass, body water percentage, etc... as well as what are the ranges expected for someone like you.

One of the things that it measures is the base metabolism rate but what surprised me is that if your metabolism is too high it shows as a bad thing. Why is that? I always thought a high metabolism would help you have more energy for daily activities as well as help you lose weight and saw it as a good thing. Is there a problem with having a high metabolism?

For context, here is the section of the app with a sad face: 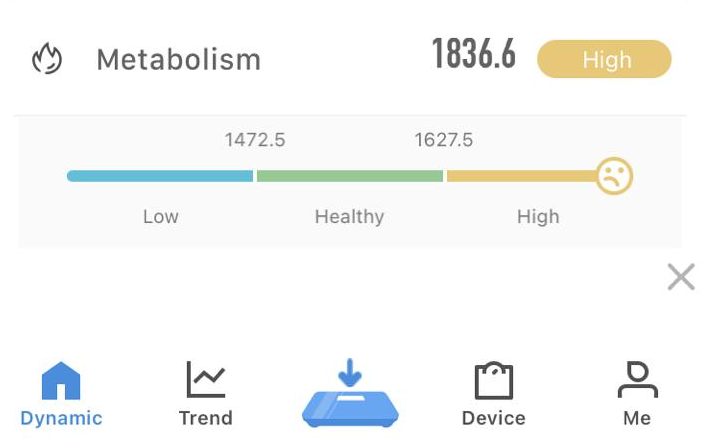 First, let me start this answer by saying that available evidence suggests that home bioimpediance devices are wildly inaccurate. This study from Consumer Reports notes:

Rating a body-fat scale on its ability to gauge body fat was more complicated, and the results were unimpressive: None was very accurate. We know that because we got benchmark readings by using a measuring tool called a Bod Pod at Sacred Heart University in Fairfield, Conn.

The body-fat scale that came closest to the Bod Pod results was still off by up to 21 percent; the worst performer was off by up to 34 percent. At least they were consistent, though, so you can use the scales that scored better at body-fat repeatability to track relative gains and losses over time.

As you note in the comments, the company's website and user manual povides no guidance on how it calculates basal metabolic rate (BMR). However, a distinct possibility that they are estimating BMR with a method such as the Harris-Benedict method.

Previous assessments of these types of methods indicate that Harris-Benedict can at least somewhat correlate with gold standard methods.

Of the predictive equations tested, the Harris-Benedict equation (mean difference: -14.8 kcal/day, RMSPE: 195.8 kcal/day, mean % difference: 0.1%) was the most accurate and precise

The key take away is that this estimation can be off by nearly 200kcal/day.

But wait, the "healthy" range on that app says it is between 1627 and 1472, that's only 155 kcal/day, way less than the error of the Harris-Benedict equation.

Given the error characteristics of BMR estimation, this seems like a meaningless thing to report.

One hypothesis has been that higher metabolic rates are associated with increased production of free radicals. These damaging free radicals could thus over time lead to health problems, poor outcomes and aging in general¹.

Rugierro and colleagues directly measured BMR in a lab and followed participants to see what would happen for 2 years. They controlled for body mass index.

Independent of age, participants who died had a higher BMR compared to those who survived. BMR was a significant risk factor for mortality independent of secular trends in mortality and other well-recognized risk factors for mortality, such as age, body mass index, smoking, white blood cell count, and diabetes.

Thus, there is some evidence to suggest that higher basal metabolic rates could be unhealthy.

3
Does caffeine reduce mass gaining by accelerating metabolism?
9
Does cinnamon accelerate metabolism?
3
Can metabolism raising help us become thinner?
2
What is the error on various body fat percentages?