Are covid vaccinations and boosters still useful and if not, why are governments and agencies promoting them?

So regarding Omicron, the latest research shows that vaccines and convalescent immunity have no or negligible effect on Omicron, and that booster shots have very little neutralising activity.

On the other hand, research shows that broadly neutralising mAbs could be an effective strategy for managing the virus.

Data commonly available for each developed country clearly shows that Omicron is displacing Delta and other variants, and it's obvious that within a matter of weeks Omicron will be the dominant strain across the globe.

Based on the above it seems intuitive to me that the current offering of vaccinations and boosters will do nothing to contain Omicron and practically nothing, or very,very little, to help reduce symptom severity. Is this correct to conclude?

If so, why are agencies and governments insisting on further vaccination? Omicron will obviously transmit to everyone very quickly, and then the only question is what kind of immunity will natural Omicron convalescence generate.

Both answers below are misleading and cherry pick data to suite a position. Reader beware. The articles strongly suggest a vastly reduced efficacy even with boosters, and all data show omicron displacing delta.

In this article the authors compare vaccine with and without booster to infection with booster. The findings are that vaccination with booster (6 months post initial vaccination course) results in higher neutralization titres by as much as 38x. Infection followed by vaccination results in greater neutralization titres, providing up to 154x higher. It is not discussed how this relates to protection from disease, but generally increased neutralizing titres will relate to greater protection.

(only) Fig from article: 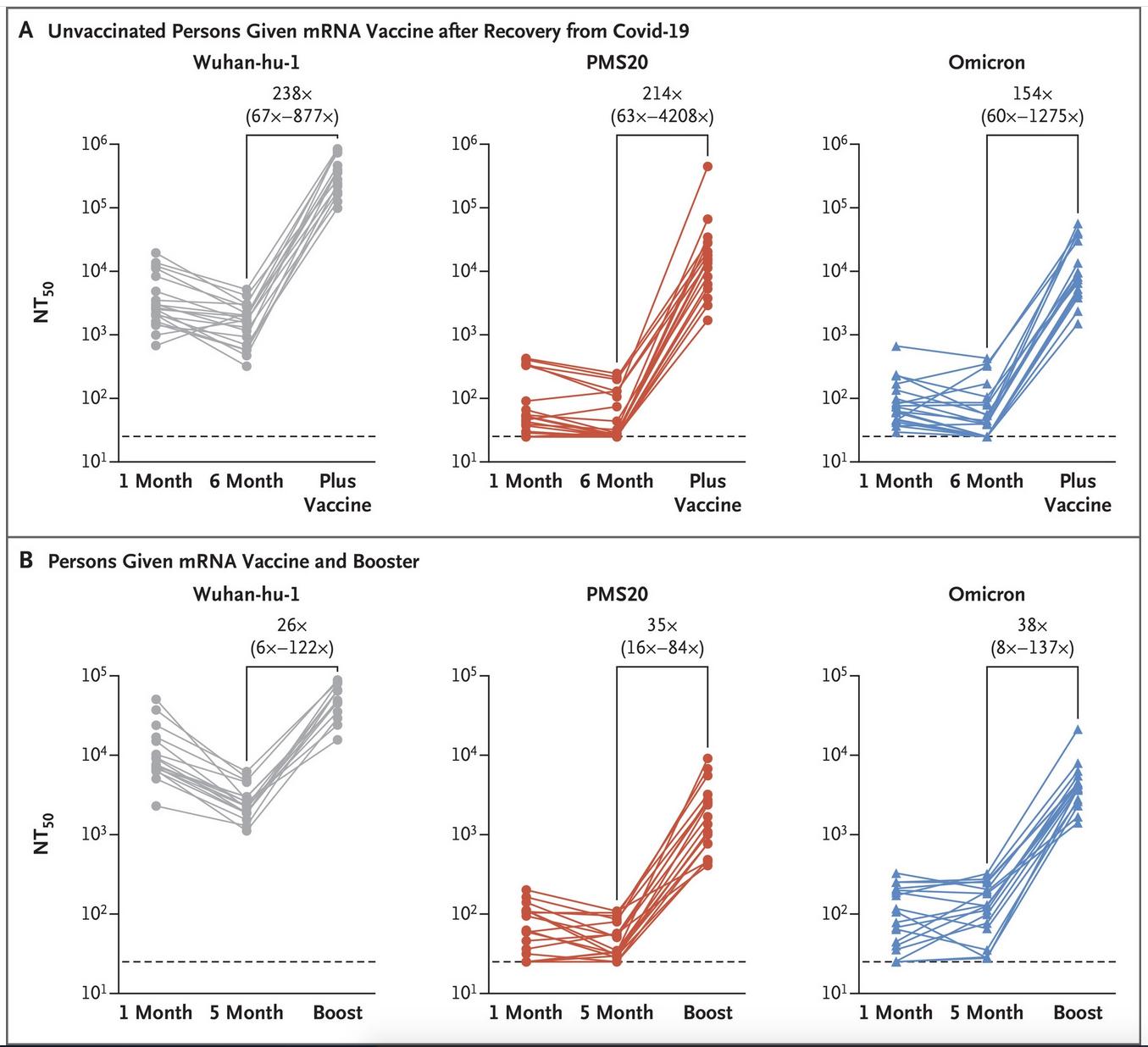 There is also this article (also from NEJM) showing the neutralization titres of 2 vs 3 Pfizer vaccines in a very small (20 people/group) study in Israel, which shows that with the regular course of vaccination, there is some neutralization of the Omicron, but not much, but when boosted that value increases2. 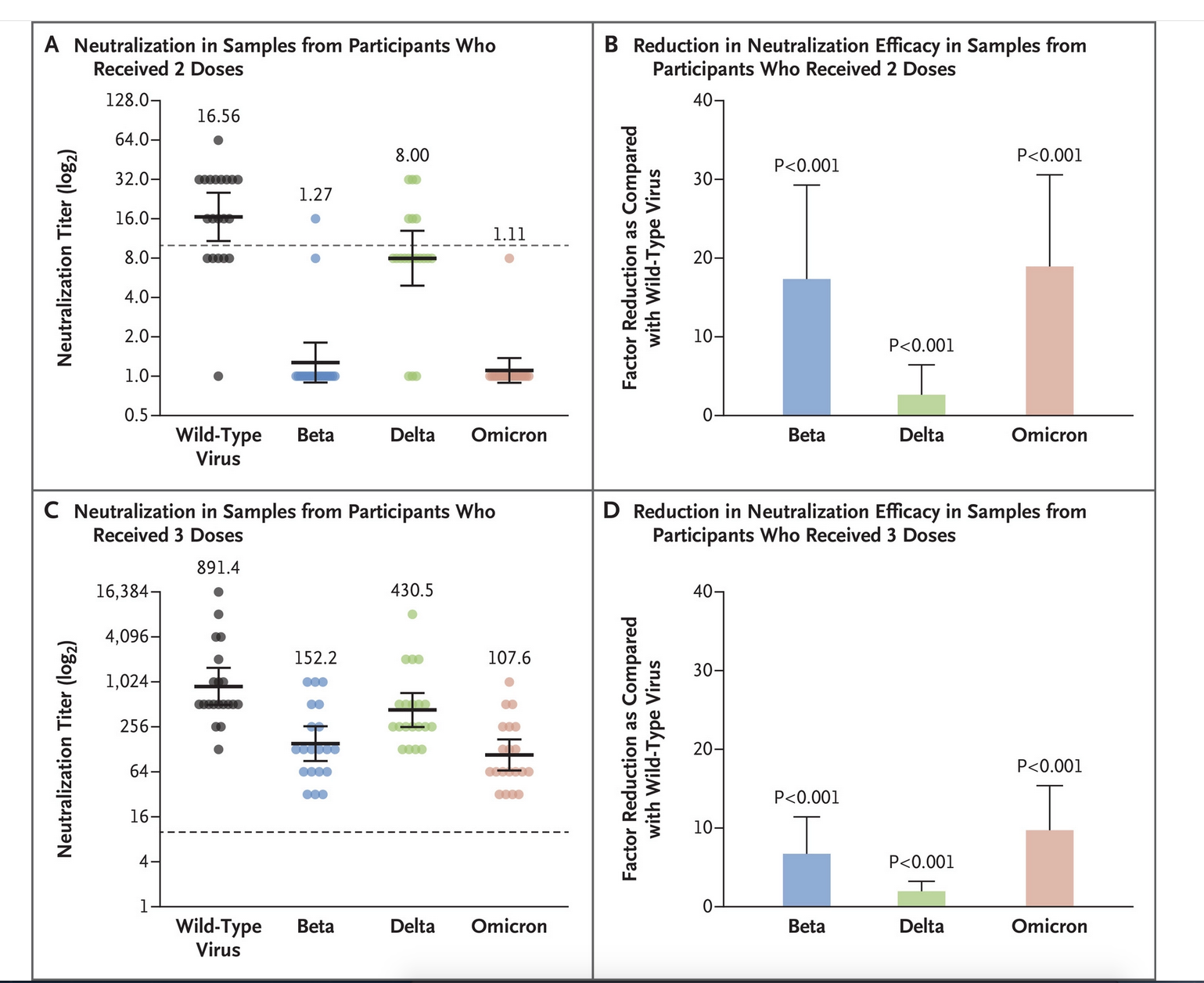 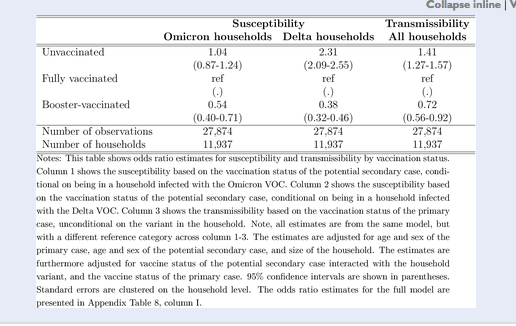 Edited to add a paper from Lancet Microbe linked by OP in the comments which looked at the efficacy of the several vaccines against some of the variants, not Omicron, but covering Delta. In this paper4 they found, as others have done that there is a reduction in the efficacy of the vaccine against variants, and attempted to model what would happen if boosted or not. The figures are fairly complex, but show that protection from vaccination without booster is lower than if boosted for all of the vaccines studied: 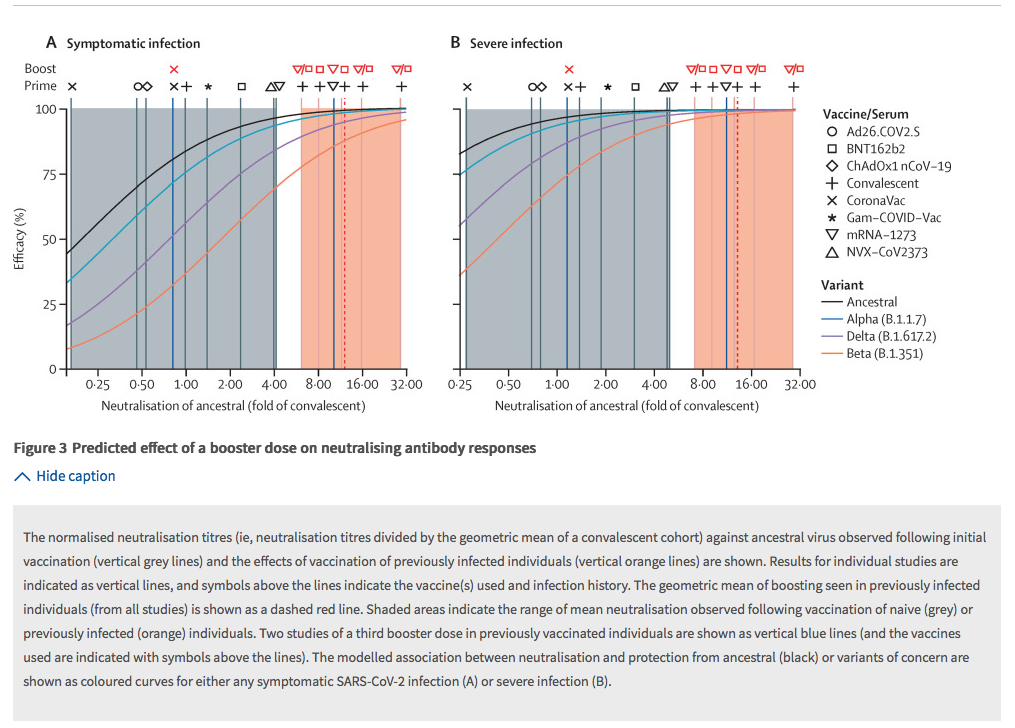 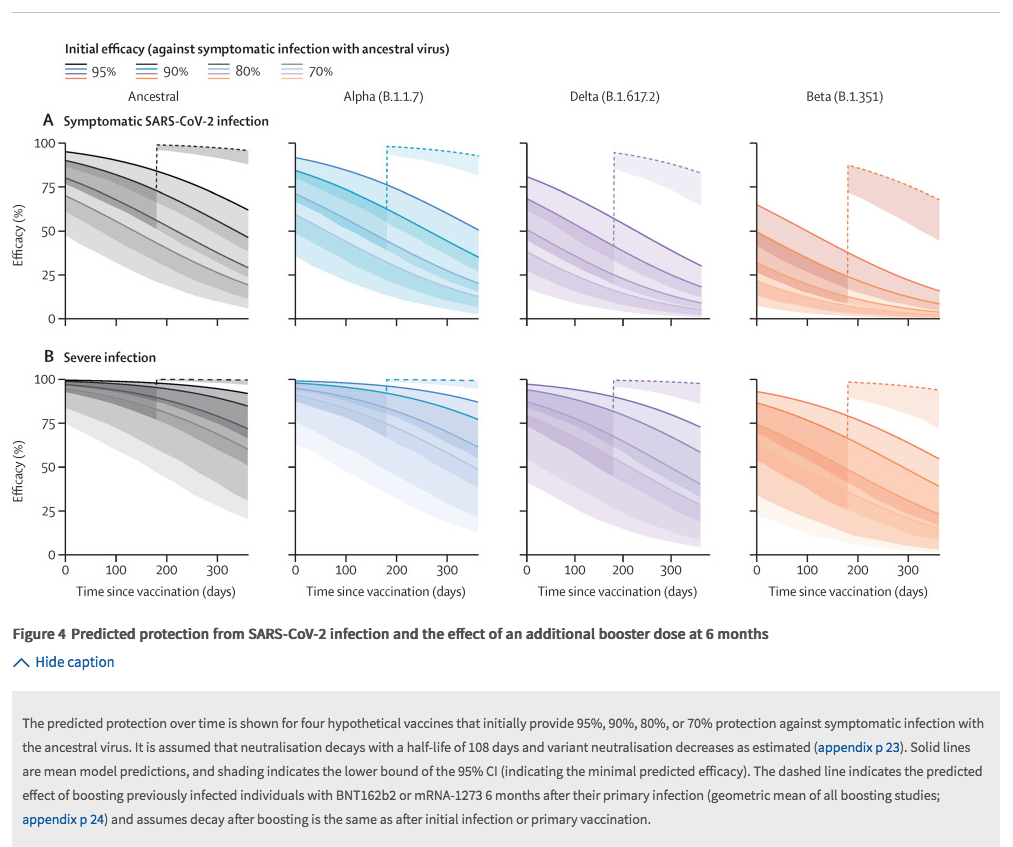 Your first source does not appear to support the idea that boosters are now ineffective, only that they are possibly less effective.

We next examined the impact of a Pfizer booster dose, administrated 7 months after Pfizer vaccination. The sera were collected one month after the third dose. The booster dose enhanced neutralization titers against D614G and Delta by 39 and 49 fold... It was also associated with strong increase of the neutralization activity against Omicron 100% of the tested sera displayed a neutralizing activity at this time point.

We can only speculate but I would guess the reason why there hasn't been a major change in public health policy is likely that this is still preliminary research and it would be unwise to hastily halt a very large programme that has up to now been quite effective.

The discussion section in the paper in your first link makes the case for the booster programs:

A booster dose significantly improves the quality and the level of the humoral immune response and is associated with a strong protection against severe forms of disease. An accelerated deployment of vaccines and boosters throughout the world is necessary to counteract viral spread.

This was consistent with the reduced neutralization levels they saw of the booster vs Omicron compared with booster vs Delta, and they cited an Israeli study Barda et al to support that this does indeed translate into clinical outcomes.

Could you please clarify this: "Altogether, these results indicate that Omicron is poorly or not neutralized by vaccinees’ sera sampled 5 months after vaccination. The booster dose triggered a detectable cross-neutralization activity against Omicron. However, even after the booster dose the variant displayed a reduction of ED50 of 18 and 6 fold, when compared to D614G and Delta, respectively."

Pretty much what it says - at ~5 months after the previous vaccination the performance against Omicron was poor, it was already reduced vs Delta at that interval as well, and since the vaccination isn't quite as effective against the Omicron variant as it is against Delta the end result was that at that point in the cycle it was barely doing anything against Omicron.

When you add the booster dose in it's more effective against Omicron (albeit still not as effective as it is against Delta), 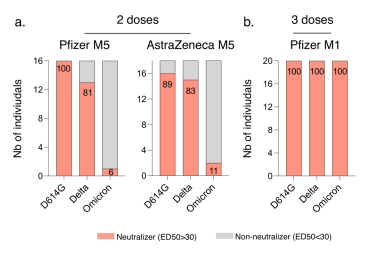 Yes the antigenic differences between Delta and Omicron means the levels of these antibodies capable of neutralizing it is lower vs Omicron than the other variants but it's still sufficient to have a significant benefit in reducing the severity of the disease in those that get it, i.e. fewer people in hospital, fewer "severe" cases, and of course fewer deaths: 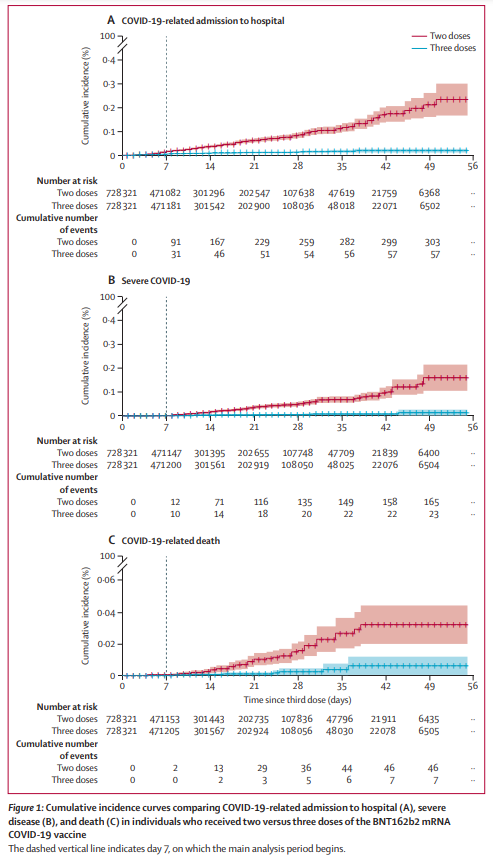 It might sound callous but frankly those who aren't sick enough to need hospital treatment aren't in much danger, and the "treatment" for them is to stay at home for 7-10 days and try not to cough on too many people in the meantime.

The paper on the use of therapeutic mAbs that a better "targeted" to Omicron than those produced by the immune response of vaccinated/convalescent individuals looks interesting, although as seen in the Schwartz article the performance against Omicron varies considerably among the different mAbs, arguably falling victim to the same differences in the new variant that have affected the vaccine performance. I'm not saying it's not worth pursuing - and certainly in the UK the NHS is using sotrovimab treatments (which seems to work against Omicron) for those in certain high-risk categories who have tested positive.

But there's some scaling issues to consider - sotrovimab is given on an IV over a 30 minute period plus a 30 minute monitoring period. So that's an hour per patient, plus any booking in and admin overhead, at a time when clinical resources are already at premium. A vaccine booster takes seconds to administer (certainly my whole appointment from walking in the door of the building to back out was less than 5 minutes including all the admin!), and can be administered by staff with a comparatively low level of clinical training and also be done pretty much anywhere (pharmacy, shopping center, gazebo in a carpark etc).

So the vaccines are already here, already tested, already mass-produced and already have a logistical infrastructure in place to give them to people on a massive scale. So, with the waning immunity offered by the previous two doses in the populations of places like Great Britain and France coupled with the highly infectious nature of Omicron a quickly spun-up booster program that provides not perfect but still pretty good protection to the general population seems to be a rather sensible route to take.

Not the answer you're looking for? Browse other questions tagged covid-19 covid omicron or ask your own question.

2
As epidemiological countermeasures, why are flights cancelled and surface transport is not?
1
COVID-19, disinfecting bike-share bikes (or rental bikes), and safely using them
2
Do coronavirus antibodies give you any immunity?
1
What is the long-term COVID-19 outlook?
2
How accurate is this covid-19 article related to reinfection risk after recovering from omicron?