Is "smokers lungs" a lie?

These images are commonly used in anti-smoking materials, at least in the US, and I've never had cause to question them. However, this guy claims the images are a lie. He cites seemingly credible sources for his claim, such as these:

“Dr. Duane Carr – Professor of Surgery at the University of Tennessee College of Medicine, said this: “Smoking does not discolor the lung.”

Dr. Victor Buhler, Pathologist at St. Joseph Hospital in Kansas City: “I have examined thousands of lungs both grossly and microscopically. I cannot tell you from exmining a lung whether or not its former host had smoked.” source

Dr. Sheldon Sommers, Pathologist and Director of Laboratories at Lenox Hill Hospital, in New York: “…it is not possible grossly or microscopically, or in any other way known to me, to distinguish between the lung of a smoker or a nonsmoker. Blackening of lungs is from carbon particles, and smoking tobacco does not introduce carbon particles into the lung.” source

The author militantly believes that smokers are treated unfairly and so clearly has an agenda, which lowers his credibility. I also find it difficult to believe that thousands of pathologists and thoracic surgeons would quietly allow such blatant distortions to go unchallenged even if they do feel that the "scare factor" makes the lie justifiable.

However, I find it surprising that I can't find compelling evidence to prove the blogger is wrong. I can find no credible sources confirming the black appearance of smokers' lungs, and all the photos I can find are the same small set of images recycled so many times it's impossible to know where they came from originally. I've also confirmed that it's true that smokers are accepted as lung donors, and it seems difficult to believe that would be the case if they were routinely as grossly damaged as they appear to be in these images.

That last phrase is tricky, because smokers who have heavy pigmentation are likely to have lung disease.

It is not a myth that smokers have black pigmentation in their lungs, but finding proof of gross pathology in picture form is difficult.

Here is one slide from MedicineNet

This is gross (visible to the naked eye) pathology, and you can see dark pigmentation in the region of emphesematous blebs.

What is not difficult to find are histopathology slides, and many of them show pigment-laden macrophages in smoker's lungs:

Although this was taken from the same page, this kind of slide is present in papers from many different authors. 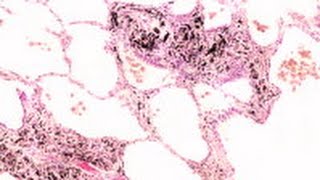 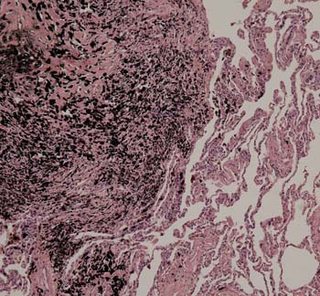 In an American Journal of Surgical Pathology on Respiratory Bronchiolitis,

A correlation was found between degree of cytoplasmic pigmentation of macrophages and number of pack-years smoked and also between the presence of peribronchiolar fibrosis and number of pack-years. No correlation was found between pulmonary function test results and pathologic findings. ...Five cases of variant [Respiratory Bronchiolitis] were encountered that resembled RB except that macrophage cytoplasm lacked pigment. All occurred in never-smokers, and their significance is unknown.

And again in another paper on RB in young smokers,

Respiratory bronchiolitis is a mild inflammatory reaction commonly noted in asymptomatic cigarette smokers. We reviewed 18 cases of respiratory bronchiolitis-associated interstitial lung disease (RB/ILD), which had been diagnosed on the basis of clinical evaluation and open-lung biopsy. All patients were cigarette smokers. The sex distribution of the patients was approximately equal, and their mean age was 36 years. Chest roentgenograms showed reticular or reticulonodular infiltrates in 72% of the patients. Histologically, inflammation of the respiratory bronchioles, filling of the bronchiolar lumens and surrounding alveoli with finely pigmented macrophages...

Finally, I spoke with two county coroner employed pathologists who stated without hesitation that heavy pigmentation was present grossly in heavy smokers, and that without knowing if a person was a smoker or non-smoker, they were able to predict with accuracy who was a heavy smoker. Furthermore, I was invited to come take pictures of lungs on autopsy (going through the proper channels and with the families' permission) of smokers and nonsmokers to authenticate the difference (That won't help with the bounty, of course).

Given all this, I don't believe that there is a medical conspiracy about smokers' lungs looking the way they do.

Lungs are very efficient at self cleaning because they need to be! You can not change your lungs like you can a filter on a hoover.

Think about it, how many smokers have you seen with black gums and mouths? Teeth and tongue can be discoloured from tea,coffee and cigarette smoke but have you ever seen anyone with the actual skin on the inside of their mouth significantly discoloured?

In addition smokers lungs are used for lung transplants and there is no evidence that they are less likely to make it through the screening process, which would include eye balling when they are removed from the donor. Can you imagine a health professional placing blackend lungs in a container and slapping a donor organ sticker on it?!?

The anti-smoking industry is happy to carry on misleading people on this subject because that is how they make their money. I would guess that the reason many people who know better do nothing to correct this misconception is simply that they think that if people stop smoking as a result of a little white lie then so be it!

Yes it is myth that smokers have black lungs! They would probably all be very dead long before they could become an organ donor.

Q: When you open up a lung and you look at it, tell the jury whether or not you can tell any difference, colorwise or otherwise between the lung of a smoker and the lung of a non-smoker? A: No, there is no way to tell whether a man smokes or not by looking at his lung.

It is on page 7 here

UPDATE 2: I have just spent a couple of hours looking for more up to date evidence on the subject with not much luck (not including the unsupported trash written in news columns). I did however find this study where lung surface carbon were analyzed in 72 autopsy specimens by image analysis and found the following:

It is only 72 specimens but I expect it was quite a time consuming and expensive process!

Not the answer you're looking for? Browse other questions tagged smoking lungs disease or ask your own question.

3
Is black spotting on the lungs a common benign variance, or a sign of pathology?

10
How long after quitting smoking to expel tar from lungs?
1
Strengthening / recovering lungs? What is the science behind this?
1
how to clean ex smokers lungs
3
Does relighting a cigarette have a harsher effect on your health?
5
It is well known that cigarette smoking makes Crohn's disease worse. Is it the nicotine or the toxins, or both?