Child got A+ blood group when both parents are O+

Although such cases are undoubtedly rare, they are not impossible. Here's a case report from 2005:

Apparent deviation from Mendelian rules of blood group inheritance is rarely observed. Blood group O parents with children expressing weak A subgroups have occasionally been described but not explained. A detailed serological investigation of such a family is described here. [...]

The propositus' RBCs were very weakly agglutinated with monoclonal anti-A but distinctly with polyclonal anti-A,B, i.e. typical for Ax. Serum anti-A1 (titre 4) and -B were present. Her parents' blood groups were both clearly O, with titres of serum anti-A1, and -A at 16 and 4, respectively. Adsorption/elution studies demonstrated A antigen on the daughter's cells only. The ABO genotypes were: mother, AxO1; father, O1vO2; and propositus, AxO2. The Ax allele was an A1-O1v hybrid allele with a crossing-over breakpoint between positions 235 and 446 in intron 6 (Ax-4). Compared to the A1 glycosyltransferase, this allele predicts a protein with two amino acid substitutions (Phe216Ile and Met277Val) known to yield either weakly expressed or no A antigen on RBCs.

This study suggests that the nature of the ABO allele in trans can influence A antigen expression, a phenomenon previously described as allelic enhancement (or reinforcement).

Theoretically, if both parents are O+, there is no chance of an A+ child. Type O blood is recessive, and must be homozygous to exhibit as the blood type. However, if one parent was mistyped, and carried O but had type A blood as his/her dominant type, then of course this would be possible.

Allegedly there are occasional genetic mysteries called "throwbacks" (cf. "atavism") which present unusual anomalies (e.g. two Caucasian parents having a black child). But aside from something of this nature, of whose possibility in this case I am uncertain, some of the possible causes might include:

Was the blood test done at school and the child, too afraid of the finger prick, begged some friend to "help"? There are a number of possibilities that one might consider, but to have an A+ child from two O+ parents is not one that I would consider.

Neither does the Red Cross, though they do seem hesitant to make a perfectly definitive declaration on account of potential issues with testing, as seen in their remarks below their blood-type graphic (available HERE). 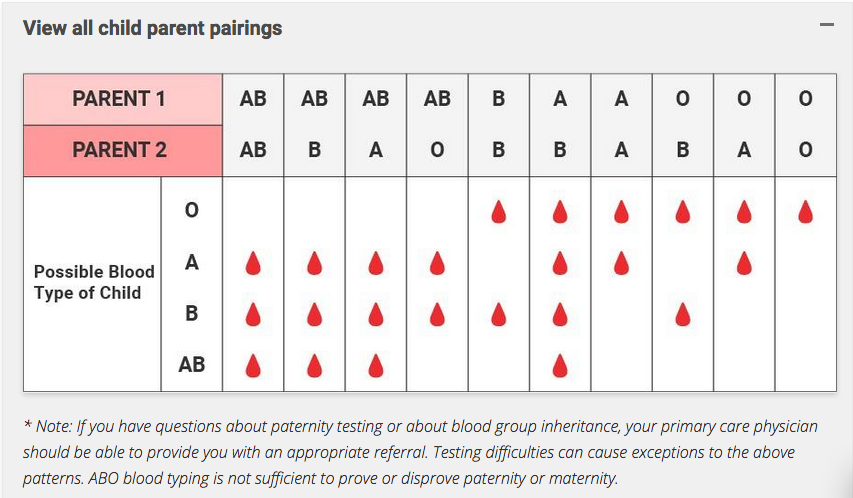 Not the answer you're looking for? Browse other questions tagged blood genetics or ask your own question.

7
Are there variations in blood cholesterol by age?
11
Are platelet donations needed more than whole blood?
12
how many 'lives' are saved from one donation of blood?
9
Is it possible to change person's blood group?
4
What are the effects of swallowing own blood from nosebleeds?
5
ABO blood type mismatch
5
Revealing a murderer based on a genetic condition
1
What happens when you put O+ blood in O- body