The most relevant banned substances for chess are: 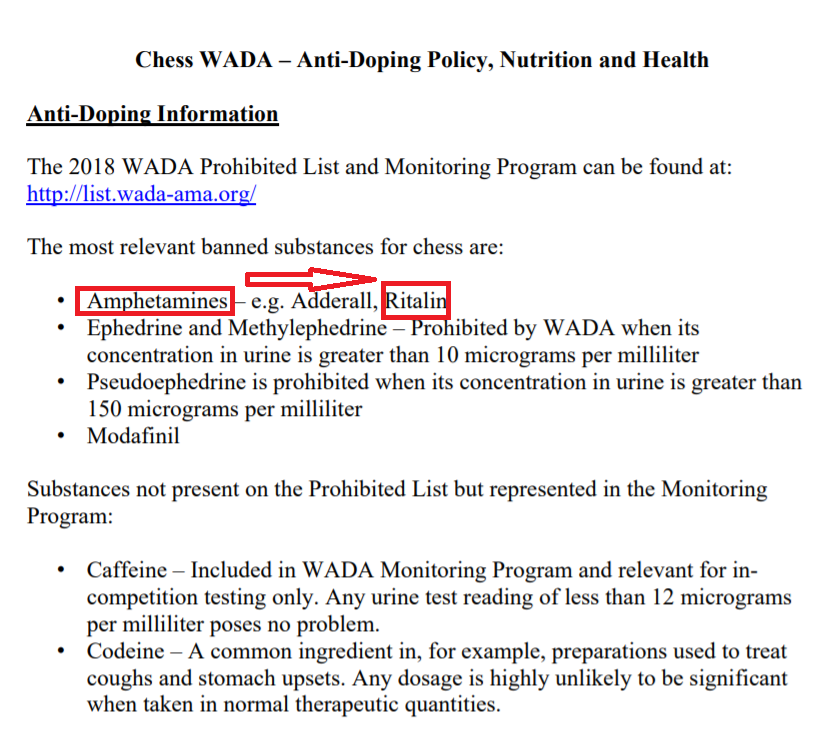 I think either Ritalin should be in a separate category called methylphenidate or Adderall and Ritalin are categorised under 'stimulants (that you need a prescription for but don't have)' (then you can add vyvanse, desoxyn, concerta, etc) or something because afaik Ritalin/Concerta/Methylphenidate is not an amphetamine.

Or am I wrong: is Ritalin/Concerta/Methylphenidate actually an amphetamine?

I agree that the regulation is worded inappropriately, and that methylphenidate is not an amphetamine. However, I would like to provide a more thorough answer than "rxlist.com says so". We'll have to borrow a few ideas from organic chemistry. 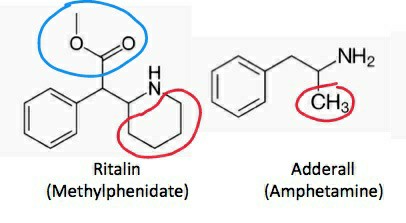 Methamphetamine, MDMA, ephedrine, methylephedrine and pseudoephedrine are also amphetamines in this sense. I've highlighted in green groups that are added to amphetamine to produce some of these amphetamines. 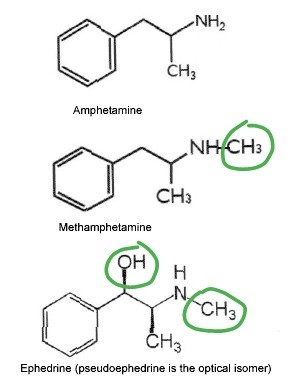 So, why isn't methylphenidate an amphetamine? The blue group doesn't make a difference, because adding it to amphetamine would just produce a substituted amphetamine. It is the group of atoms circled in red that matter. You see, amphetamine is a portmanteau of alpha-methylphenethylamine, which signifies that amphetamine is a phenethylamine molecule with a methyl group (CH3) in the alpha location, as depicted below. (Phenethylamines are an interesting class of molecules in their own right, including many drugs and neurotransmitters such as dopamine, norepinephrine and adrenaline.)

Therefore, one way in which the chess WADA policy could be reworded is:

Phenethylamine Stimulants - Ritalin or amphetamines such as Adderall, ephedrine, pseudoephedrine or methylephedrine, when exceeding the urine concentrations listed below.

Using the category phenethylamine stimulants would be scientifically correct and provide a useful contrast to the category of non-prohibited stimulants, i.e. caffeine.

The Adderall vs. Ritalin page on Rx List gives the answer.

Methylphenidate (also sold as Concerta) isn't an amphetamine and its effects tend to be milder than those of Adderall. Patients also report a more pronounced effect on cognitive function and thought processes when taking Ritalin as opposed to Adderall, which comes with a number of effects on the body such as increased heart rate and others.

Therefore, it could potentially create an unfair advantage to those who are under the influence.

However, the World Anti Doping Agency (WADA) do have Therapeutic Use Exemptions (TUEs). This allows those suffering from ADHD for example, to continue their medication therapy as long as they satisfy strict criteria. (See the USADA webpage for more)

Athletes with ADHD can continue using necessary prohibited stimulant medications while competing in sanctioned sports as long as they receive a Therapeutic Use Exemption (TUE), which requires them to demonstrate that they can satisfy strict criteria for TUE approval.

Not the answer you're looking for? Browse other questions tagged medications mental-health biochemistry stimulants adhd or ask your own question.

5
What is wrong with taking coffee and methylphenidate together?
4
Can early exposure to stimulates, like ritalin, result in higher tolerance to them?