An NIH study studied the efficacy of different combinations of Covid-19 vaccines in terms of the level of antibodies produced. Dr. Rob Swanda tweeted out a chart summarizing the results: 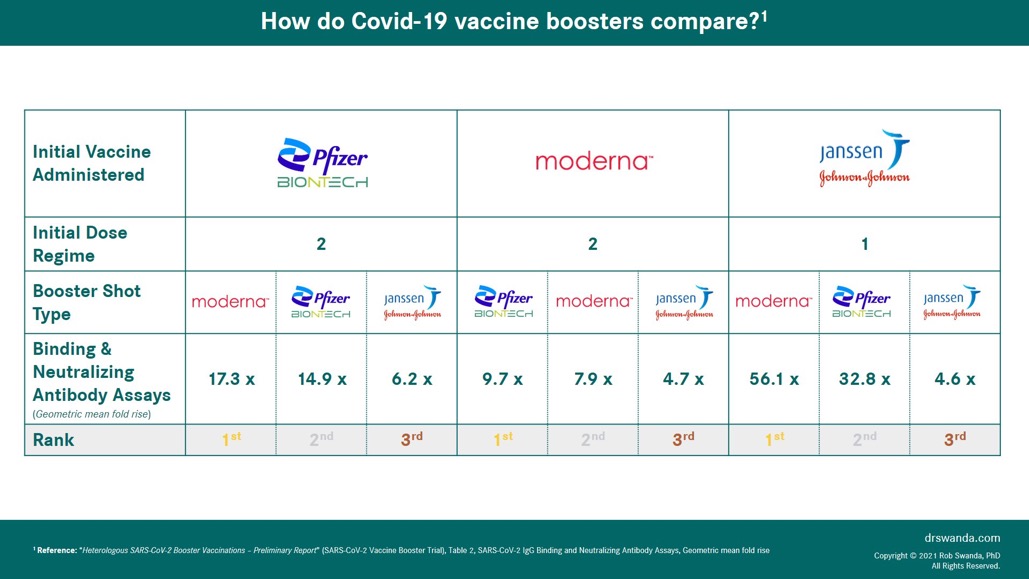 Yet news articles which summarizing the exact same NIH study say that it says the opposite. Here is what the Wall Street Journal says:

In the NIH study, the people with the highest overall antibody levels were those received the Moderna vaccine for their first two doses and Moderna as a booster. Next came people who got the Pfizer vaccine and a Moderna booster, followed by Moderna and a Pfizer booster.

And here is what The Atlantic says:

Overall, the highest antibody levels were found among people for whom all three doses were Moderna; Pfizer → Moderna produced the second-highest levels, then Moderna → Pfizer.

So my question is who is right, Dr. Swanda or the Wall Street Journal and The Atlantic? Or are they both right and are talking about different things?

TLDR: in the actual paper/preprint, neither for the raw antibody values nor for the ratio relative to day 1 is there a statistically significant difference between Moderna-after-Moderna and Pfzier-after-Moderna.

Well, if the first pdf you linked to is the study all sources talk about, in that one 3x Moderna elicited higher antibodies than anything else... at day 15 post booster; but do note the 95% confidence interval of that figure overlaps the one for Pfizer-boosting-Moderna (immediately to the right of it), and to a lesser extent also overlaps Moderna-boosting-Pfizer. So you cannot really draw a conclusion from this which of these three combos is better, but Moderna as an initial vaccine seems to have a consistent trend of outperforming the others. Pfizer-boosting-Pfizer (rightmost figure) is outside the confidence interval of Moderna-boosting-Moderna though. 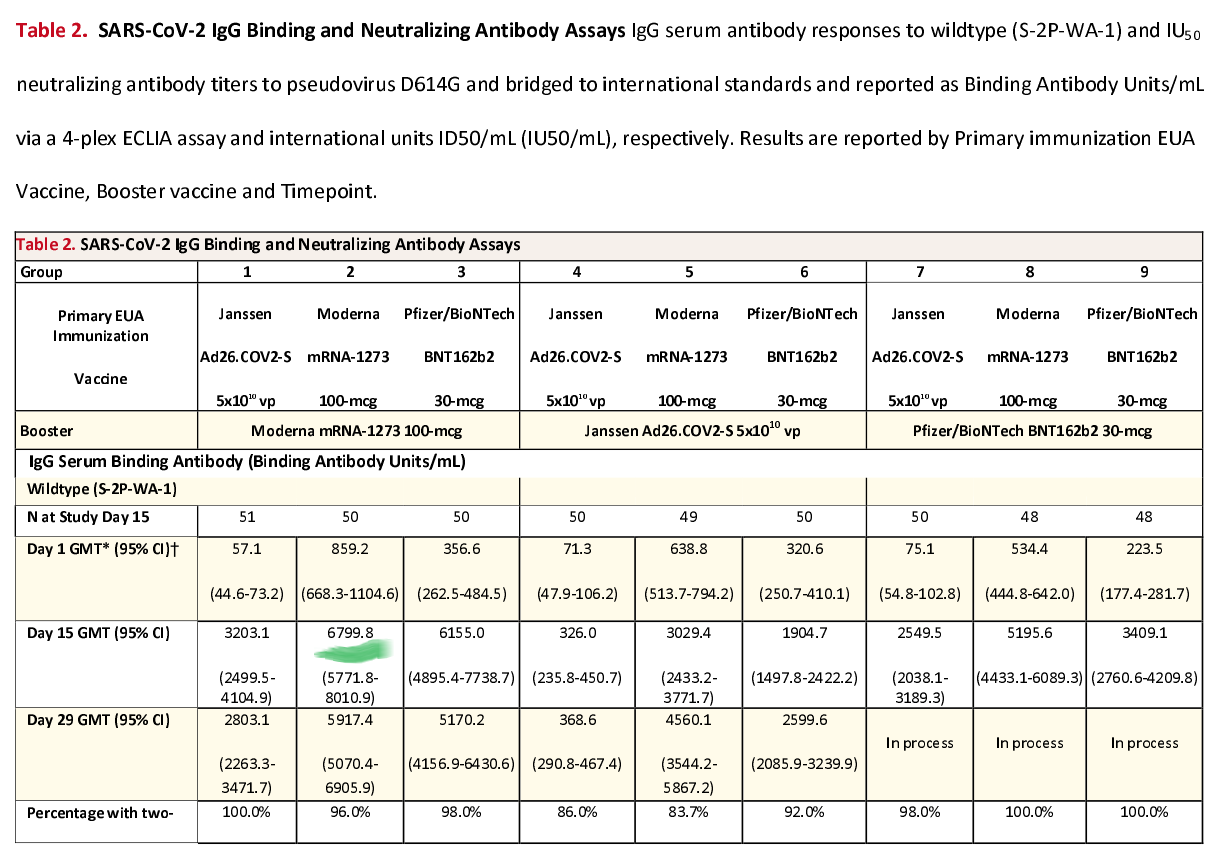 There are a two more caveats to this:

The table from "drswanda.com" (that you've also posted) is rather confusing: it chose to transform those raw figures into multipliers. In this transformation vaccines that had lower initial antibodies (J&J, Pfizer) show higher multipliers when boosted, but that doesn't mean they are better. Dr. Swanda chose do this calculation using day-1 as baseline, e.g. for moderna-moderna vs moderna-pfizer:

However, those day-1 values are rather questionable baselines. Look at column 2 vs column 8 for day-1 in the original paper; there is a statistically significant difference (non overlapping CIs) in the day 1 values for moderna vs moderna after two does?? That makes the multipliers using that baseline rather meaningless.

The main paper doesn't make this terribly clear, but in the supplementary tables, the "day 1" measure is pre-boost throughout. So that means they indeed started with two moderna-vaxed groups that had statistically different baselines and ended up with with an overlapping measure post boost (either moderna of pfizer). Unfortunately this doesn't let you make any real inference, except as a trend, maybe.

By the way, this is discussed to some extent in the paper:

Our study has limitations. It was not designed to directly compare responses between different booster regimens. The sample size is insufficient for inter-group comparison [...] Volunteers were not randomized into groups, nor stratified with respect to population characteristics or interval from last vaccination.

The last bit might actually explain the significant differences in starting antibody titers between sub-groups that were vaccinated with the same initial vaccine (e.g. Moderna x2).

So really the press and the twitterati are trying to push this study to conclusions that can't be safely inferred, and which the authors are probably not going to try and (statistically) test... although there is this bit in the preprint mostly singling out the J&J as inferior to the mRNA boosters:

Persons who received an mRNA-based booster vaccination had a four-fold increase in their neutralization response more frequently than those who were boosted with Ad26.COV.S.

That is largely supported by 2nd half of that table 2, but for a strict statistical test, you'd have to pool the data for each booster... because one of those cells (Ad26.COV.S after Pfizer) does overlap some mRNA booster cells in the confidence interval--most ironically perhaps with Moderna after Moderna. I suspect there's some kind of ceiling effect (or diminishing returns) with that one. 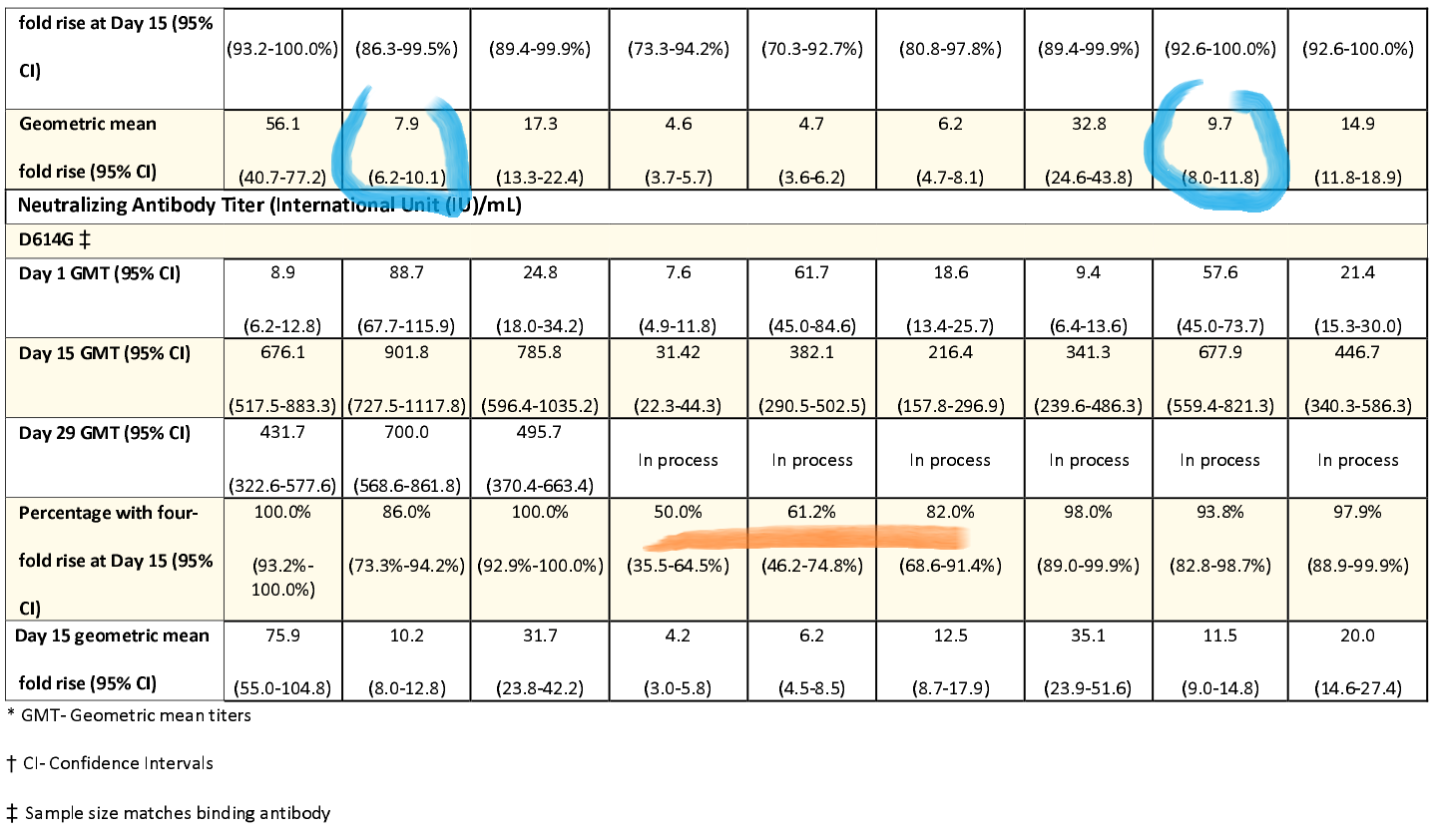 Also, I don't really see a discussion/explanation why the 4-fold increase in anti-bodies is a clinically relevant threshold.

More to the point of your question, this 2nd half of the table does have the ratios that were published by Dr. Swanda and they even have confidence intervals here, but there's overlap between Moderna x3 and Pfizer-after-Moderna: the "7.9" has a 6.2-10.1 CI, and the "9.7" has 8.0-11.8. So it's not very sensible to say statistically significant difference exists between those ratios, based on this study.

Not the answer you're looking for? Browse other questions tagged covid-19 statistics covid-19-datasets data vaccine or ask your own question.

0
Covid-19 spike protein as vaccine?
9
Is there a reason to be anxious about claim that COVID-19 vaccine could turn out to be inducing infertility in females?
1
Are the covid-19 vaccines more protective against severe disease and death than against simple infection?
2
Is AstraZeneca having better safety record than Pfizer or Moderna?
0
A recent Israeli study found the Pfizer COVID-19 vaccine to have only 64% efficacy against the Delta strain - is that with full vaccination?
1
Is there a more recent official presentation (than Aug 11) on the Israel's Covid-19 vaccine effectiveness, particularly on the booster shot?