There are readily available antibody tests that help determine if the human body has been exposed to the Sars-CoV-2 virus or exposed to a vaccine that generates antibodies to a subset of the actual virus (CDC Serology Testing). Based on many published scientific works having segregated antibodies from disease versus vaccines, it also appears feasible to determine if the body shows a reaction to the full virus, or a subset of the virus (reaction to a vaccine). This latter test is likely not readily available, but instead, available to medical researchers.

The above serology testing is based on detecting antibodies with specific properties that indicate their origin. The question I have is about having tissue samples tested, as opposed to blood or serum.

Is it feasible to have a tissue sample (a "biopsy") analyzed to check for the presence of Sars-CoV-2 spike protein? These proteins, produced by the human cellular machinery upon introduction of vaccine vector or by the disease itself are thought to be destroyed over time. To validate the speed and completeness of this destruction, is there a protocol to test a sample to ascertain the level of these proteins? If so, what researchers are doing this work?

Edit to add: The purpose of the test would be to validate the claim that the proteins generated by the vaccines do not persist in the human body.

It's unclear to me what tissue you expect to be sampled. SARS-CoV-2 is a respiratory virus and like similar viruses it's (differentially) diagnosed by "nasal" (more accurately: nasopharyngeal) swabs and PCR or at most by doing the same (PCR) on the more invasive (to obtain) BAL samples, which are more commonly used in pneumonia cases. (The latter samples are also used to detect bacterial co-infections etc.)

Actually, SARS-CoV-2 has some affinity for cells in the digestive tract as well, but while stool sampling can detect it, I haven't heard of it this method being very common, in practice. (As far as determining the aforementioned affinity, some duodenal biopsies were performed, but that would be way overkill/invasive for regular diagnostics.)

As for your question on the destruction of the spike protein from the vaccines... no that hasn't been tested at all in humans, as far as I know. During vaccine development, modified fluorescent proteins have been used in vitro to determine how the protein spreads and how long it lasts. (For some other vaccines, I do recall seeing full-mouse fluorescent images, but I'm not sure such studies have been for SARS-CoV-2 vaccines in particular, due to the speed of development during the pandemic.) For a state-of-the-art paper on fluorescence tracking of mRNA during delivery see e.g. https://pubs.acs.org/doi/10.1021/jacs.1c00014

Below is what a "kinetic biodistribution" study looks like. This one is for an experimental Chinese mRNA vaccine, using two different types on nanoparticles. (The point of the paper is to claim that their LPP is in some ways superior to "traditional" LNPs used in Western vaccines.) 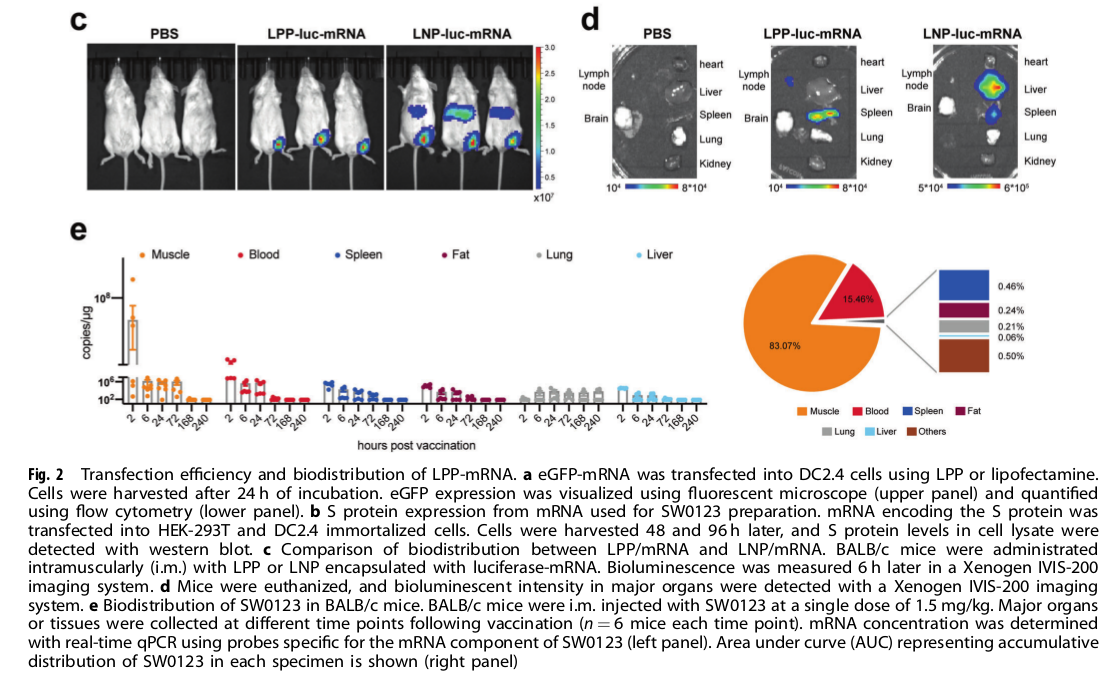 The time-graph (e) is pretty badly rendered; there's larger version here, but from I can see, they've only tracked up to 240 hours, after which the mRNA was mostly gone (except maybe from the lungs), so they stopped.

These things are generally conducted for regulatory approval purposes, but not always published as papers in the academic press. For your purpose of knowing the trajectory of the spike protein rather than mRNA, a study like this on a protein subunit vaccine like Novavax's would be useful, but from their studies I know about, they haven't published something like the above.

Yes, there is a way to test for presence of the spike protein in organ samples. This may not be possible in human biopsies / tissue samples with the standard vaccine, but it was done by Pfizer while testing BNT162, PF-07302048, as indicated in their own test data*. Done in rats (Wistar Han strain). 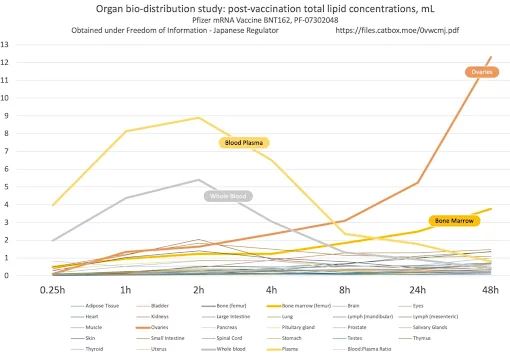 Not the answer you're looking for? Browse other questions tagged sars-cov-2 biopsy or ask your own question.

5
How long can SARS-CoV-2 persist on surfaces?
15
If a SARS-CoV-2 asymptomatic infected individual is exposed to a high viral load, could they develop COVID-19 disease?
9
Is there a reason to be anxious about claim that COVID-19 vaccine could turn out to be inducing infertility in females?
1
Are there *in vitro* studies that find ivermectin directly effective against the SARS-CoV-2 spike or its other proteins?