what is risk of breakthrough infection with pfizer and delta?

There is varying information on this topic, does anybody know is there is any consensus on the rate of breakthrough infections with delta and pfizer vaccine?

Does this article say the rate is 39 procent? is it accurate? I am not medical expert btw. thanks!

First, the question is pretty badly framed as there's can't be a "consensus on the rate of breakthrough infections with delta and pfizer vaccine" simply because that absolute risk depends on prevalence in a country/region. Second, as you'll see, it depends on when the vaccine was administered (relative to when the PCR test is made.)

What the Israel Ministry of health has published in some detail (albeit not [yet] in a scientific journal, as far as I know) is the rate of infection as a function of when the vaccine was administered. And not only have they [self-]published this info, but they acted on it, by initiating a 3rd/booster shots for the elderly, now extended to everyone over 12 y.o. who had their last dose more than 5 months ago. Here are some slides from the July presentation, which basically justified their booster decision. 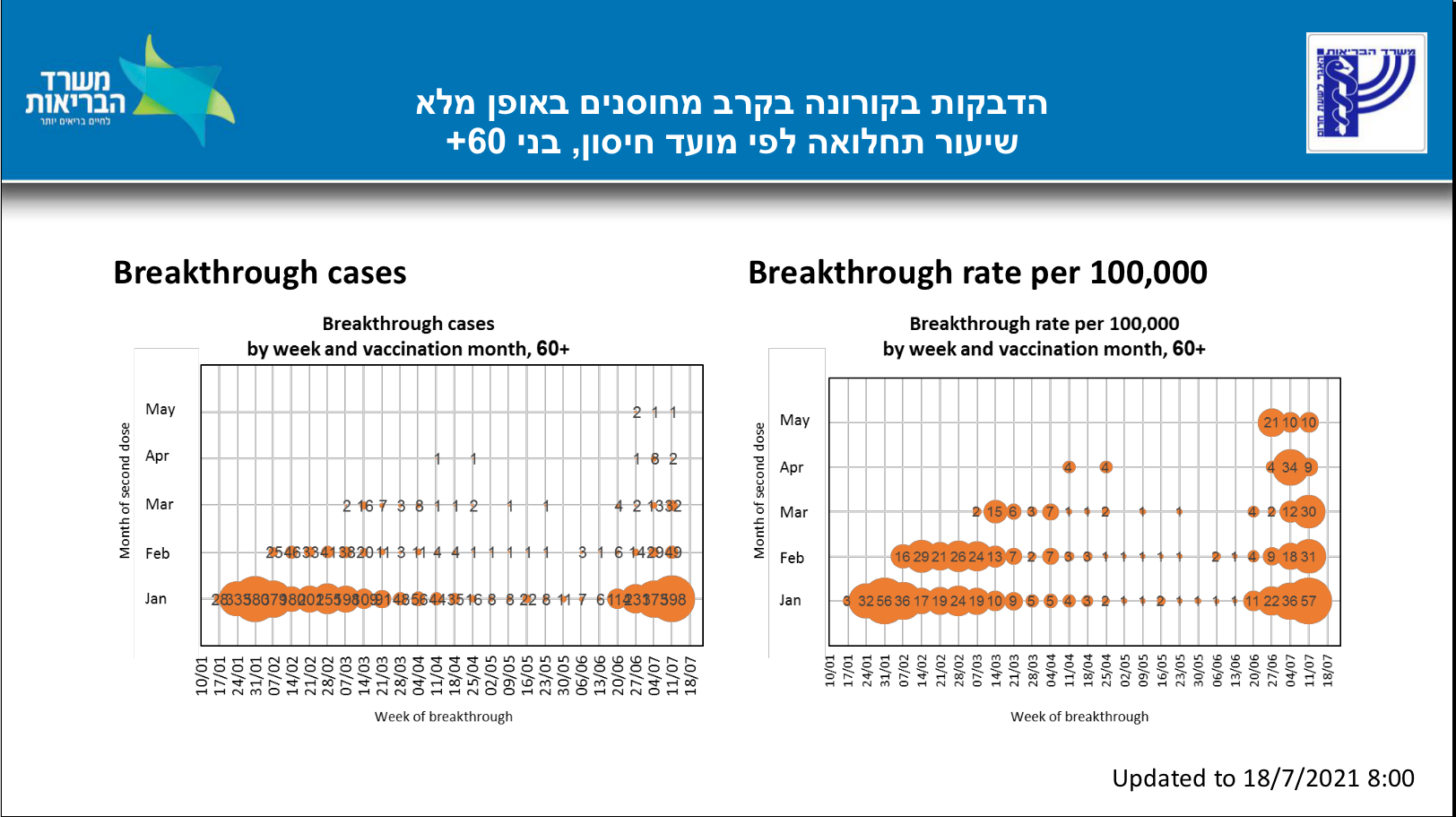 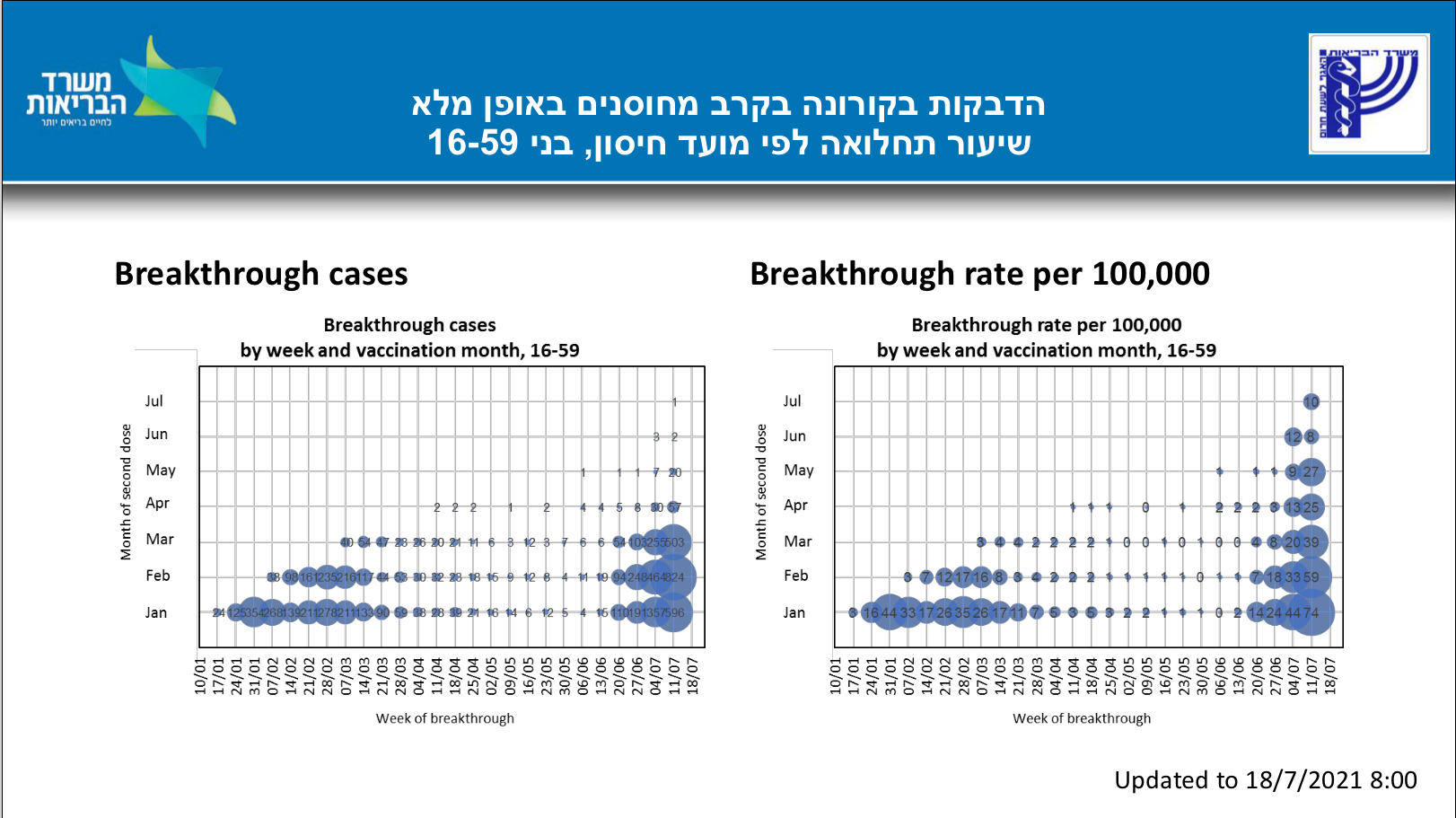 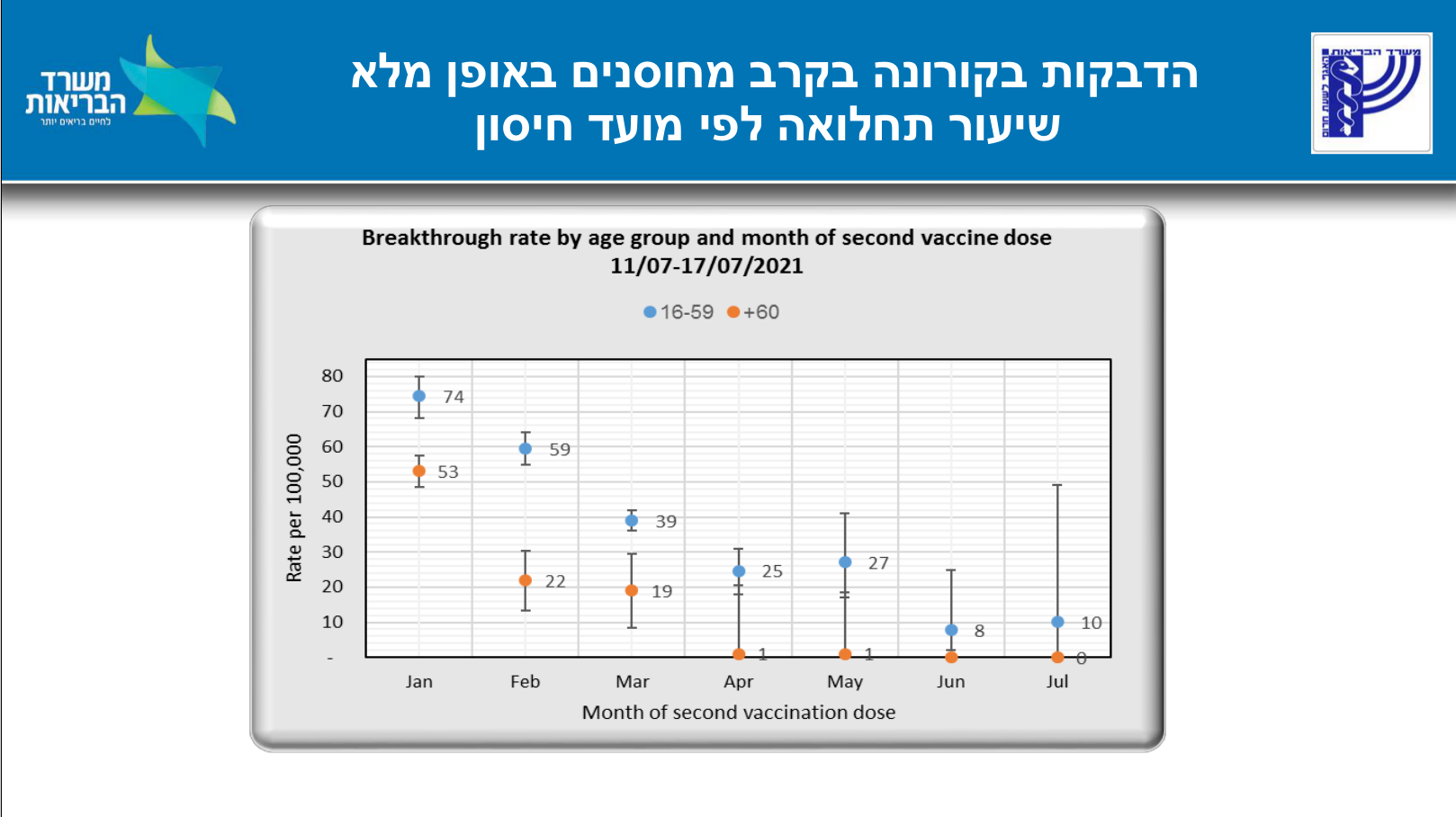 So basically, it depends when you had your last vaccine dose, but they observed a noticeable decrease in effectiveness for vaccines administered 5+ months before. There's also a paper preprint in English (which doesn't have all those graphs though) with a similar conclusion:

Now (going back to the slides) the 39% is the overall observed vaccine effectiveness [at preventing infections] in one particular period (approximately a month). It's also substantially lower than e.g. the rate at which hospitalization was prevented in the vaccinated (88%). 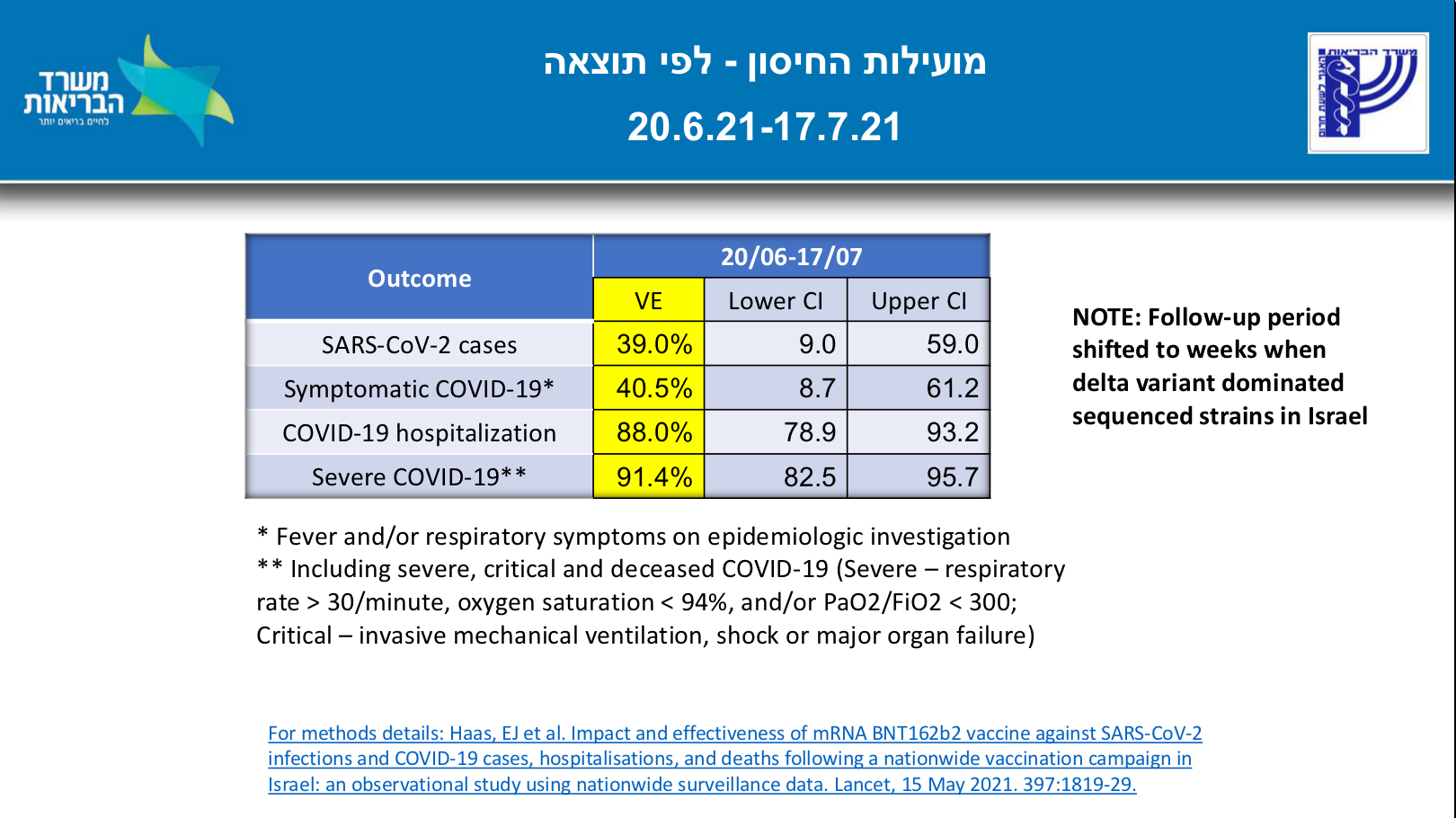 This "39%" isn't a number of great importance in itself. E.g. as booster shots are being administered now, you can expect it to go up again. (It was 64% a month before.) The [95%] confidence interval reported for this "39%" figure is pretty wide (9-59%). Also, the 39% hides quite a bit more variation relative to vaccine administration date; see the left-most cluster in the last slide. 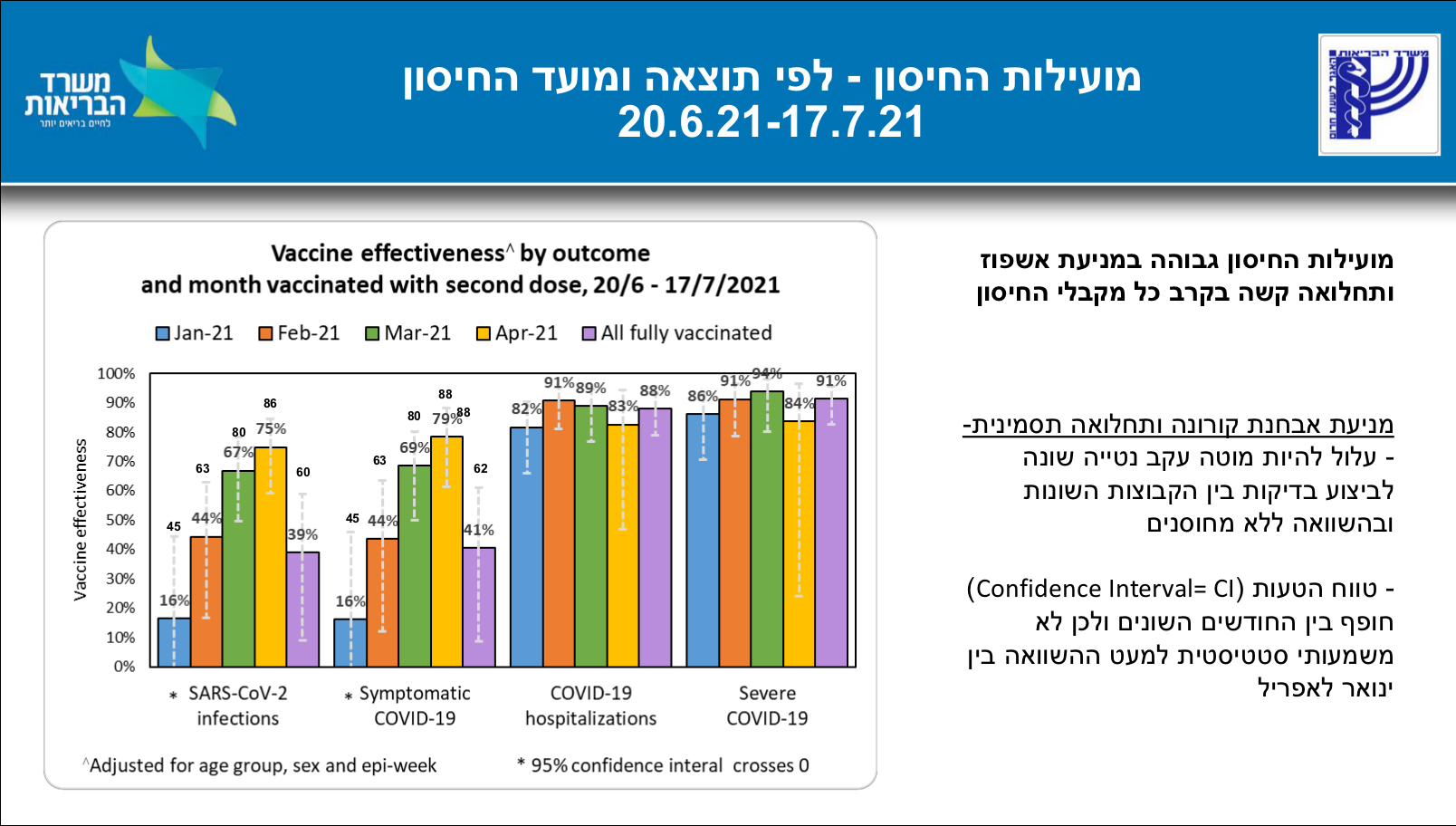 By month of vaccination, the relative effectiveness was 16% (January-administered vaccine), 44% (Feb), 67% (Mar) and 75% for April and later administrations, relative to infections in the mid-of-June to mid-July one-month observation interval.

Finally, they've already announced a reversed trend on August 22. The Reuters story says new slides have been uploaded on the ministry's (or rather some vaccine panel's) site, but I've not located them yet... See also Science's coverage of the Israeli booster, albeit this comes from a week before.

I did find the ministry's data from Aug 8 (published Aug 11) though. There is a flattening (or reverse) that I'm guessing is more apparent in later data. Not clear (at all) if this is causal with the 3rd/booster dose just from that graph. 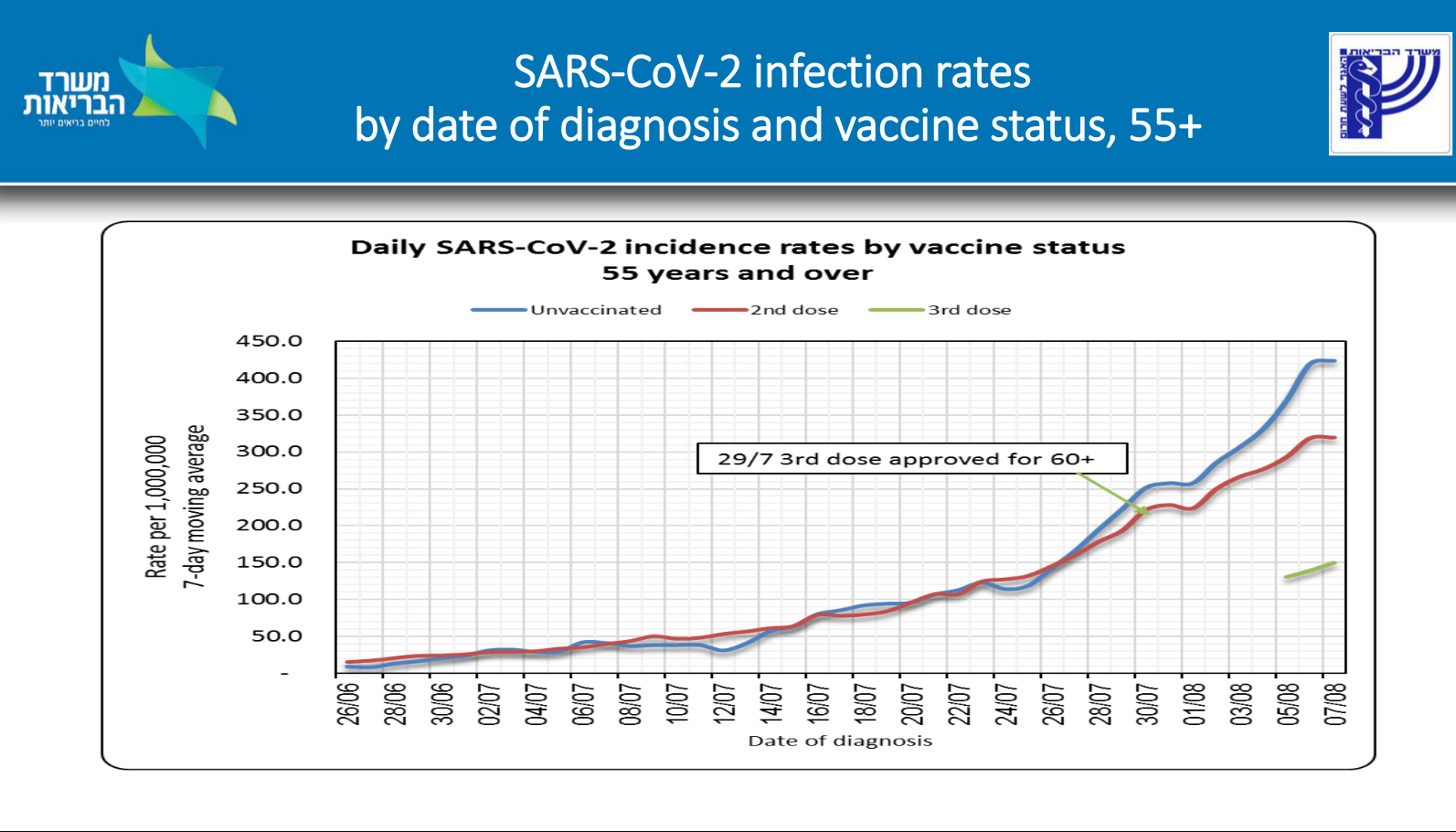 Not the answer you're looking for? Browse other questions tagged covid-19 vaccination immune-system or ask your own question.

0
A recent Israeli study found the Pfizer COVID-19 vaccine to have only 64% efficacy against the Delta strain - is that with full vaccination?

9
Is there a reason to be anxious about claim that COVID-19 vaccine could turn out to be inducing infertility in females?
3
How can a vaccine prevent an individual from getting a disease but not from transmitting it?
1
Are the covid-19 vaccines more protective against severe disease and death than against simple infection?
0
A recent Israeli study found the Pfizer COVID-19 vaccine to have only 64% efficacy against the Delta strain - is that with full vaccination?
1
Are there any downsides in getting vaccinated with the Pfizer or Moderna COVID vaccine after having received the Johnson & Johnson's COVID-19 vaccine?
1
How does getting 2 or 3 shots of the Pfizer or Moderna COVID vaccine compare against 1 shot Johnson & Johnson's vaccine + 1 shot of Pfizer or Moderna?
1
Vaccine death efficacy calculation and how it works