Is AstraZeneca having better safety record than Pfizer or Moderna?

Recently, AstraZeneca vaccine got some bad press for few cases of blood clouts as side effect leading some countries to even suspend its use for people younger than 56 (see here).

I am not a medical researcher, but I work in multidisciplinary research project with medical researchers on covid19, during dinner discussion a collogue of mine actually told me that this bad press was very misleading citing recent paper by Walach et al (2021) which shows, based on new data from Israel and the Netherlands that Astra-Zeneca has actually better safety record than Pfizer, see the data below. 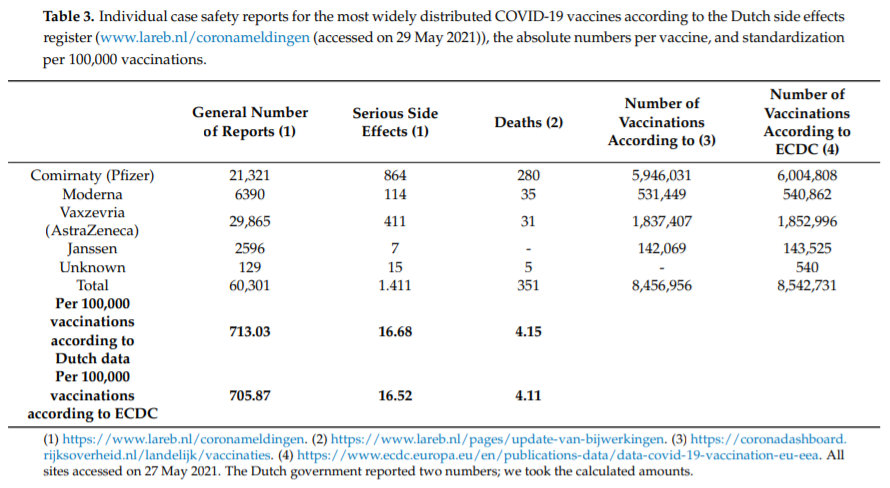 Taking the data in the table at face value it looks like AstraZeneca is the safest vaccine.

However, I am not sure how reliable the research above is. The research has an expression of concern attached to it but the expression of concern addresses just the interpretation of the data (the authors also claim that this safety record suggest vaccination of young people should be postponed - which seems clearly controversial but there is no mention of data being wrong and here I am not much interested in the interpretation of that paper for vaccination programs but rather only relative safety of AstraZeneca vs Phizer and Moderna).

In addition, this colleague of mine looks bit biased against the mRNA vaccines (both Phizer and Moderna are mRNA to my best knowledge while AstraZeneca is DNA based).

Also I googled the journal on Scimago and its Q2 journal so I assume that its a good or at least relatively good journal and not just some predatory journal.

However, as a scientist I know that one can never just judge one study in a vacuum without understanding how it fits the larger 'mosaic' of the body of published research.

Consequently, my question is as follows:

Is AstraZeneca safer (in terms of serious side effects and deaths) than Pfizer & Moderna? I of course understand that literature might not yet be fully settled but taking the current state of the literature is it likely that AstraZeneca is safer than Pfizer & Moderna, or is this likely spurious result or perhaps the paper has some serious flaws (e.g. is that dataset even reliable, even in paper they state there might be some misreporting going on)?

It's impossible to say based on the available data. The adverse-event reports merely show correlation, not causation.

One common confounding factor is the population receiving the vaccine: the Pfizer and Moderna vaccines were the first ones approved, so people with elevated risk from COVID-19 tended to get these vaccines. Many of these risk factors are also risk factors for dying of things that are neither COVID-19 nor a COVID-19 vaccine. You need to compensate for the fact that these populations contain a higher proportion of 98-year-olds suffering from cancer, heart disease, and lung disease than the general population.

Specific points from the Dutch site (via Google Translate):

The Q is a bit apples to oranges, as the side-effect profiles are different. With the recombinant vaccines (AZ, J&J) the main concern was with clots and bleeding, but with the mRNA ones, myocarditis has been the issue.

Large enough studies have found a statistically significant risk differences e.g. among the 2.53 million people that were vaccinated in Scotland at that point:

Reports of ChAdOx1 vaccine–associated thrombocytopenia and vascular adverse events have led to some countries restricting its use. Using a national prospective cohort, we estimated associations between exposure to first-dose ChAdOx1 or BNT162b2 vaccination and hematological and vascular adverse events using a nested incident-matched case-control study and a confirmatory self-controlled case series (SCCS) analysis. An association was found between ChAdOx1 vaccination and idiopathic thrombocytopenic purpura (ITP) (0–27 d after vaccination; adjusted rate ratio (aRR) = 5.77, 95% confidence interval (CI), 2.41–13.83), with an estimated incidence of 1.13 (0.62–1.63) cases per 100,000 doses. An SCCS analysis confirmed that this was unlikely due to bias (RR = 1.98 (1.29–3.02)). There was also an increased risk for arterial thromboembolic events (aRR = 1.22, 1.12–1.34) 0–27 d after vaccination, with an SCCS RR of 0.97 (0.93–1.02). For hemorrhagic events 0–27 d after vaccination, the aRR was 1.48 (1.12–1.96), with an SCCS RR of 0.95 (0.82–1.11). A first dose of ChAdOx1 was found to be associated with small increased risks of ITP, with suggestive evidence of an increased risk of arterial thromboembolic and hemorrhagic events. The attenuation of effect found in the SCCS analysis means that there is the potential for overestimation of the reported results, which might indicate the presence of some residual confounding or confounding by indication. Public health authorities should inform their jurisdictions of these relatively small increased risks associated with ChAdOx1. No positive associations were seen between BNT162b2 and thrombocytopenic, thromboembolic and hemorrhagic events.

Further, the issue is that while that effect itself is quite rare, a large fraction of the unlucky few have had pretty bad outcomes (death).

Vaccine-induced immune thrombocytopenia and thrombosis (VITT) is a new syndrome associated with the ChAdOx1 nCoV-19 adenoviral vector vaccine against severe acute respiratory syndrome coronavirus 2. [...] We conducted a prospective cohort study involving patients with suspected VITT who presented to hospitals in the United Kingdom between March 22 and June 6, 2021. ​[...] Among 294 patients who were evaluated, we identified 170 definite and 50 probable cases of VITT. All the patients had received the first dose of ChAdOx1 nCoV-19 vaccine and presented 5 to 48 days (median, 14) after vaccination. The age range was 18 to 79 years (median, 48), with no sex preponderance and no identifiable medical risk factors. Overall mortality was 22%.

Whereas with myocraditis after Pfizer but alas from a country that didn't adminizer AZ (so no comparator like you want):

Approximately 5.1 million Israelis had been fully immunized against coronavirus disease 2019 (Covid-19) after receiving two doses of the BNT162b2 messenger RNA vaccine (Pfizer–BioNTech) by May 31, 2021. After early reports of myocarditis during adverse events monitoring, the Israeli Ministry of Health initiated active surveillance.

Among 304 persons with symptoms of myocarditis, 21 had received an alternative diagnosis. Of the remaining 283 cases, 142 occurred after receipt of the BNT162b2 vaccine; of these cases, 136 diagnoses were definitive or probable. The clinical presentation was judged to be mild in 129 recipients (95%); one fulminant case was fatal.

Not the answer you're looking for? Browse other questions tagged covid-19 vaccination safety or ask your own question.

2
Are "some serious side effects and deaths expected" from a mass vaccination campaign of a new vaccine?
2
Why wouldn't the Pfizer, Moderna, AstraZeneca, and Johnson & Johnson vaccines be equally effective?
2
Are side effects of corona virus vaccines no worse than virus symptoms?
20
Is SM-102 a safe ingredient in the Moderna vaccine, despite these safety warnings?
0
Blood count and adenovirus vaccines
1
Are there any downsides in getting vaccinated with the Pfizer or Moderna COVID vaccine after having received the Johnson & Johnson's COVID-19 vaccine?
1
How does getting 2 or 3 shots of the Pfizer or Moderna COVID vaccine compare against 1 shot Johnson & Johnson's vaccine + 1 shot of Pfizer or Moderna?