What are potentially carcinogenic prostatic secretions

In the answer by @Jan to the question What is "stagnation in the prostate"? it is pointed out via Rider, et al. (2016) what is sometimes referred to as the prostate stagnation hypothesis. Apparently, one biological mechanism involves prostatic accumulation of "potentially carcinogenic" secretions, which may create more opportunity for prostate cancer development.

Further research using Google Scholar and Google points out that the prostate secretes fluid that nourishes and protects sperm, but nothing seems to enlighten me as to what excretions (or part thereof) are potentially carcinogenic. So, what are they?

Are they carcinogens responsible for cancer of the cervix or womb?

A potential way the "carcinogenic substances in prostate sections" hypothesis took off is when Graham Giles began doing interviews with the lay press¹ʼ².

Generating the fluid involves concentrating these components from the bloodstream up to 600-fold – and this could be where the trouble starts. Studies in dogs show that carcinogens such as 3-methylcholanthrene, found in cigarette smoke, are also concentrated in prostate fluid. “It’s a prostatic stagnation hypothesis,” says Giles. “The more you flush the ducts out, the less there is to hang around and damage the cells that line them.”

There are many examples in human physiology where epithelial cells can concentrate ions or other substances including in the salivary glands and kidney³. And Junqueira notes:

The tubuloacinar glands of the prostate are lined by simple or pseudostratified columnar epithelium and produce a fluid that contains a complex mixture of exosomes, various glycoproteins, enzymes, and small molecules, such as prostaglandins, and is stored until ejaculation.

The dog studies in question seem to have been conducted decades ago. In one study, conducted in 1977⁴, the authors found that after exposure the concentration of a particular carcinogen (3-methylcholanthrene) was sometimes higher in the prostatic fluid than the plasma.

Here is one of their graphs: 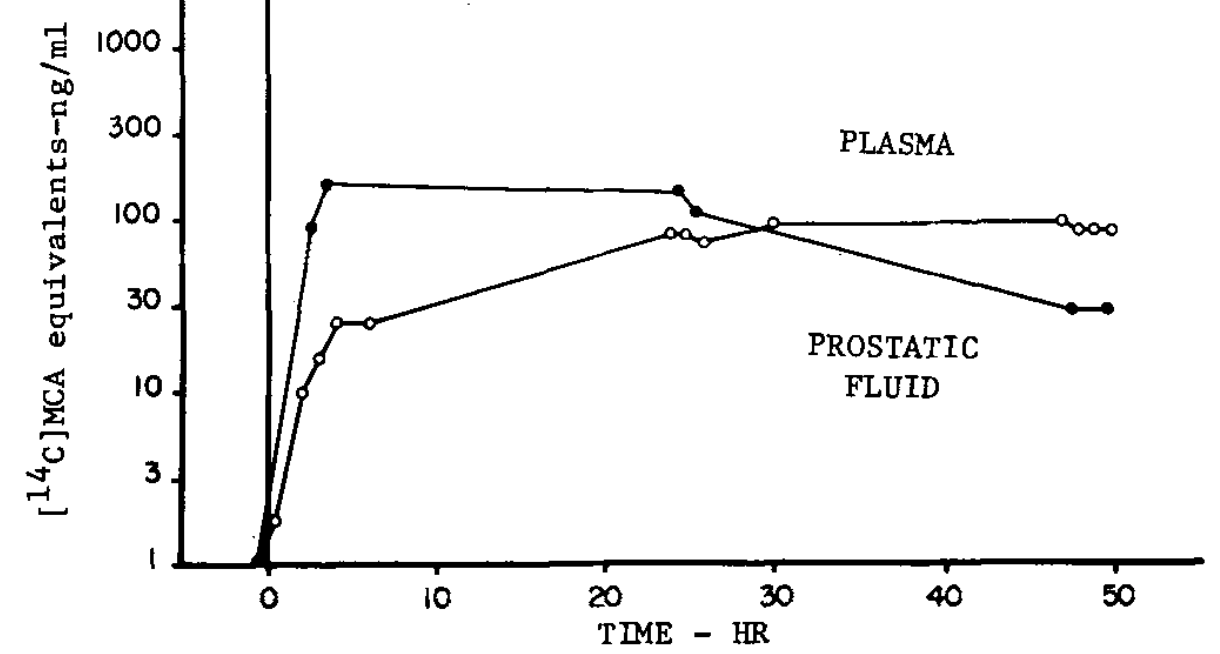 I personally don't feel this is very good evidence for particular strong concentration of carcinogens in prostate fluid (and certainly not 600-fold as intimated in the New Scientist article), but I'm not a prostate biologist.

Overall, it seems that this aspect of the stagnation hypothesis is based on concentration of exogenous carcinogens into prostate fluid rather than constituents of physiologic prostate secretions. The experimental evidence for this hypothesis seems mostly based on decades old animal experiments which have not been reproduced in humans.

Not the answer you're looking for? Browse other questions tagged cancer prostate prostatitis carcinogens enlarged-prostate-bph or ask your own question.

3
What is "stagnation in the prostate"?

7
What are the health risks associated with Monosodium Glutamate, if any?
4
How carcinogenic are neoprene coated dumbbells?
4
What are we putting on our faces!?! Why don't we have an agency like the FDA approving/monitoring the safety of cosmetics?
3
What is "stagnation in the prostate"?
2
Are dosages of Saccharin Sodium in food are non-carcinogenic?