Is there evidence that vaccine-related blood clots could be due to injection technique?

Recently, Danish health authorities including Denmark's SSI issued new guidelines for intramascular vaccination to be done with aspiration, in case some of the vaccine-induced blood clot cases are due to injection into the bloodstream. Unfortunately, I have been unable to find any recent scientific sources on this. But I found that thrombocytopenia has been consistently reported following the administration of adenoviral gene transfer vectors, and that downstream effects of platelet activation and aberrant initiation of coagulation upon intravenous adenovirus injection are dangerous.

I understand that with proper technique, one can with very high confidence perform an intramascular injection without using aspiration to confirm it. However, since the blood clot cases are very rare (on the order of 10−5), I do not believe that we can exclude accidental errors as a potential cause, unless we have sufficient evidence that intravenous injection of the vaccines do not cause blood clots. Are there any experts that know of actual scientific studies on this matter?

While I realize this doesn't answer your question in the narrow way that you frame it ("I do not believe that we can exclude accidental errors as a potential cause" as you put it), I'm offering this as a frame challenge to the theory that accidental i.v. injection is the main reason why STT occurred in those patients.

There's a 2020-published study on the biodistribution of ChAd3 vaccine in rats. (The vaccine itself has already been administered in humans in some years prior.) In my non-expert opinion, the important point is that even after presumably-as-properly-as-I.M.-injection-can-be-done-in-a-lab-setting, there was systemic DNA circulation detected in the blood within 24 hours. 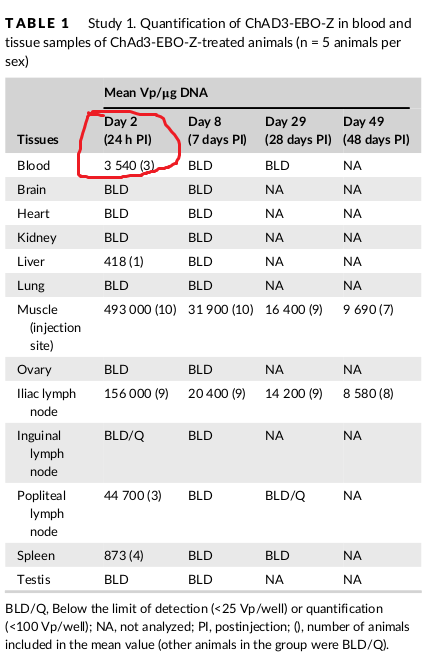 In the biodistribution study, rats received a single intramuscular injection of either ChAd3-EBO-Z or saline [...] Blood was collected before necropsy from the abdominal aorta or vena cava of animals (under deep anesthesia)

So while you seem to have a binary approach (i.v. accident/error vs totally proper I.M. injection), biology doesn't seem to work that way in practice.

On the other hand, it's also true from older studies (cited in that paper) that the level of such effects was (administration) dose-dependent, so very likely it's also dose-dependent on the amount of DNA that does get into the blood even after a as-proper-as-can-be-done I.M. injection.

So, a more proper way to frame the problem would be to measure the amount of circulating viral DNA (even after a seemingly-totally-proper-I.M.-injection) and correlate that with the side effects of concern here. But I don't know of any study that has done that.

Furthermore, one interesting, perhaps, angle here is that most of the papers cited in the (two) studies you've linked to were actually done on Ad5. Quoting from one of these (Lieber et al. (2007)):

Adenovirus-Platelet Interaction in Blood Causes Virus Sequestration to the Reticuloendothelial System of the Liver [...]

Lieber's study itself was done on Ad5.

In the Ad26-related literature (relevant to J&J's vaccine), and more generally in "species D" favoring literature (Ad5 is "species C"; Ad26 is "species D"), some effort is made claim that those Ad5-findings might not apply to them, at least to the same extent, e.g.

Biodistribution studies of Ad26 and Ad48 demonstrated no liver sequestration after intravenous delivery, in contrast to Ad5.

The latter claim seem to rely on single 2008 paper (Baker et al.), which did look at the precise (Ad5) protein [hexon] involved; the gist of it is in its figure 7. The Ad-26 treated mice literally glow in the dark less than the Ad5-treated ones, in the liver area. That Baker paper also dabbled with swapping out the precise Ad5 genes involved with ones from Ad48, creating a chimeric Ad5 that was more "nicely behaved" with respect to liver accumulation & toxicity.

So, Ad26-proponents (at least the Gamaleya press releases) thus seem to want to claim that Ad26-vectored therapeutics would be less susceptible to other kinds of side effects (besides lower liver toxicity) that were noted with "stock" Ad5. But I think the difference is rather insufficiently quantified otherwise; (insofar) I could not find comparative studies on how much the precise choice of Ad vector subtype matters for thrombocyte count or coagulation issues. (There is however a more in-depth 2012 study on how Species C (Ad5) triggers coagulation.)

Yes. This recent Nature article mentions a few potential hypotheses for vaccine-related blood clots, including the hypothesis in question here:

One possible factor affecting the safety of adenoviral vaccines is how they are administered. The COVID-19 vaccines are given as injections into muscle, but if the needle happens to puncture a vein, the vaccine could enter the bloodstream directly. Leo Nicolai, a cardiologist at Ludwig Maximilian University of Munich, Germany, and his colleagues found in a mouse study that platelets clump together with adenovirus and become activated when the Oxford–AstraZeneca vaccine is injected into blood vessels, but not when it is injected into muscle.

It cites Nicolai et al. (2021), which provided experimental support in mice models of thrombocytopenia due to the AstraZeneca vaccine after intravenous injection but not after intramuscular injection. It does state that animal models may not reproduce effects observed in humans, but it does provide evidence that vaccine-related blood clots could be due partly to injection technique.

Not the answer you're looking for? Browse other questions tagged vaccination virus coronavirus injections hematology or ask your own question.

2
Why is aspiration not commonly used for IM vaccine administration in the U.S.?

7
Is there evidence that the over-avoidance of germs weakens our immune system?
4
Is there scientific evidence that spacing out vaccines have any positive effects?
13
Was there ever a vaccine candidate that showed negative side effects many months or years after the patient was injected?
2
Are there methods available to determine ongoing cell damage in Covid-19 survivors?
1
Are there any other reasons than mutation that could cause a virus to be able to infect the same person twice?
10
Is there a reason to be anxious about claim that COVID-19 vaccine could turn out to be inducing infertility in females?
0
Blood count and adenovirus vaccines