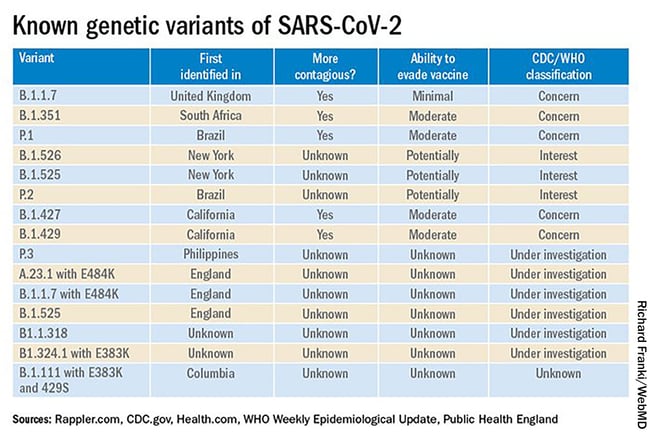 Source: Where Do COVID Vaccines Stand Against the Variants?

The nomenclature seems to follow a hierarchical pattern. What does the first letter and the subsequent numbers indicate? Location of the mutation?

The full details are quite complicated, but this nomenclature defines SARS-CoV-2 variants by a lineage depending on which variant they are descended from.

This article can be found from Pangolin (Phylogenetic Assignment of Named Global Outbreak LINeages, in case you were wondering!).

which uses the above system in it's software.

The concept is not unique however, for example NextStrain use the following to name their COVID-19 clades.

Alas (Pangoling/COG-UK) base letterings don't stand for location. And neither do the numbers following them stand for directly identifiable mutations except for the "with E484K" designators. Those directly stand for specific mutations relative to the first-identified/original variant. As Wikipedia explains

The name of the mutation, E484K, refers to an exchange whereby the glutamic acid (E) is replaced by lysine (K) at position 484. It is nicknamed "Eeek".

As for designations like B.1.1.7 those refer indirectly to mutations. The competing designation for that from Nextstrain is 20I/501Y.V1 (formerly 20B/501Y.V1).

Nextstrain is a US-Swiss endeavor, while Pangolin/COG-UK is (somewhat evidently) UK based.

As for the Pangolin naming, they started with two letter (A and B) but the first letter actually changes when the nesting gets too deep:

We propose that major lineage labels begin with a letter. At the root of the phylogeny of SARS-CoV-2 are two lineages that we simply denote as lineages A and B. The earliest lineage A viruses, such as Wuhan/WH04/2020 (EPI_ISL_406801), sampled on 2020-01-05, share two nucleotides (positions 8782 in ORF1ab and 28144 in ORF8) with the closest known bat virus (RaTG13). Different nucleotides are present at those sites in viruses assigned to lineage B, of which Wuhan-Hu-1 (Genbank accession MN908947) sampled on 2019-12-26 is an early representative. Hence, although viruses from lineage B were sequenced and published first (Wu et al. 2020; Zhu et al. 2020; Lu et al. 2020), it is likely (based on current data) that lineage A viruses form the root of the SARS-CoV-2 pandemic phylogeny. At the time of writing, viruses from both lineages A and B are still circulating in many countries around the world [...]

e then defined further SARS-CoV-2 lineages, each of which descends from either lineage A or B and is assigned a numerical value (e.g. lineage A.1, or lineage B.2). Lineage designations were made using the following set of conditions: [...]

Each descendent lineage should show phylogenetic evidence of emergence from an ancestral lineage into another geographically distinct population, implying substantial onward transmission in that population. In the case of a rapidly expanding global lineage the recipient “population” may comprise multiple countries. In the case of large and populous countries it may represent a new region or province. [...]

The iterative procedure in step II can proceed for a maximum of 3 sublevels (e.g. A.1.1.1) after which new descendent lineages are given a letter (in English alphabetical sequence from C - so A.1.1.1.1 would become C.1 and A.1.1.1.2 would become C.2.

At the time that paper was written B.1.1.7 had not yet been identified, but its ancestors were:

Now the lineage P.1 for example

has also been called 'B.1.1.28.1', although strictly only three sublevels are permitted in the PANGO Lineage system of nomenclature, hence the designation 'P.1'.

6
How long does it take for the COVID-19 antibody to disappear?
3
How can a vaccine prevent an individual from getting a disease but not from transmitting it?
3
Would vaccines against COVID variants (e.g. B.1.1.7) need *additional* clinical trials?
1
Are the covid-19 vaccines more protective against severe disease and death than against simple infection?
0
A recent Israeli study found the Pfizer COVID-19 vaccine to have only 64% efficacy against the Delta strain - is that with full vaccination?
10
Are Covid-19 vaccines much more deadly than people (and scientists) think?