What effect does social distancing have on the contagiousness and lethality of virus spread?

There are various degrees of 'lockdown'. From poorly worn masks and poor material choices, to people being confined to their homes for long periods of time.

It is safe to assume that practical lockdown applications are only a diluted version of what the desired policy is.

What effect do these measures have on the contagiousness and lethality of the C19 virus?

Why, in the context of social distancing measures, is the Kent mutation both more lethal and more contagious?

If the (preliminary) Harvard data on the Kent (B 1.1.7) strain is correct, it is more contagious because infections with it last longer. This would be a selective advantage in any context. I see the news from yesterday, based on a large UK study, is that B 1.1.7 also has a higher CFR and its survival curve diverges around day 13, which isn't actually incompatible with infection with it lasting longer.

What this means in the context of social distancing measures, is that B 1.1.7 has higher probability of defeating partial/shorter timeframe measures.

The ECDC said a month ago that a full strain replacement with a more contagious one may even beat the vaccine rollout in their region, in the sense of causing a large "bump" in daily deaths (this wasn't even taking into account a higher CFR, I think):

Due to the increased transmissibility [of variants] Modelling analysis shows that unless NPIs [non-pharmacetical intervetions] continue, or are strengthened in terms of compliance during the coming months, a significant increase in COVID-19-related cases and deaths in the EU/EEA should be anticipated. [...]

ECDC modelling analysis suggests that if a novel strain of SARS-CoV-2 with an increased transmissibility of 70% replaces the previously circulating strains in the EU/EEA by the end of February 2021, the NPIs in place at the end of January 2021 would be insufficient to prevent a substantial increase in COVID-19 mortality, even as vaccines are being rolled out (Figure 2). However, some strengthening of these measures has already taken place. 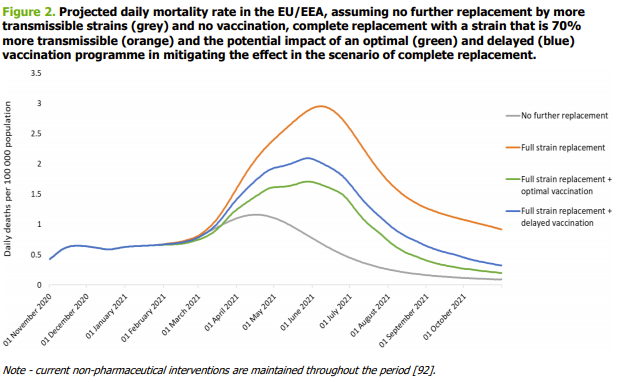 While some of that was probably overly pessimistic, in some of the EU countries (from which there's not news in English) one has to wonder what is going on...

According to some experts, failing to account for the increased transmissibility of the new variants, and thus adjust the lockdown measures more "ahead of time" was partly responsible for the recent spike in Central/Eastern Europe: 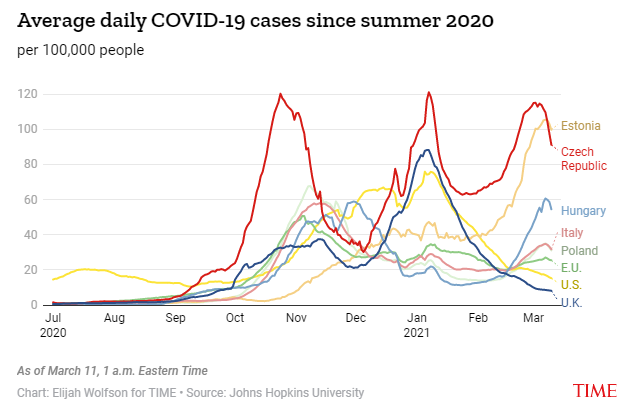 The “most likely explanation” for the rise in cases [in Europe] is the spread of a new variant, first identified in South East England in December, says Martin McKee, professor of European public health at the London School of Hygiene and Tropical Medicine. The new variant, technically referred to as “B.1.1.7.,” is believed to be about 50% more transmissible than the earlier forms of SARS-CoV-2, he says.

In the Czech Republic, lack of mass sequencing of the virus in December and January has meant scientists were unable to identify if and where the B.1.1.7 variant had spread in the country, says Rastislav Madar, Head of the Institute of Epidemiology and Public Health at the University of Ostrava and a former advisor to the government. It remains unclear how widespread the variant is. A Feb. 12 Reuters report cites “data from January“ showing “between 45% and 60% of new patients were infected with the U.K. variant,” and according to Madar, in February, the variant accounted for 60% to 80% of cases in some parts of the country, says Madar. “It was so dominant that it was really unstoppable,” he adds.

Lockdown measures imposed to keep previous iterations of SARS-CoV-2 under control have generally “not been effective enough” at containing the B.1.1.7 variant, says McKee. “Many countries are struggling with two parallel epidemics of the old and new variants.” He argues that E.U. countries should have reviewed their COVID-19 strategies in early December when the variant was first found to be spreading in the U.K. “Countries almost needed to put their restrictions up a tier at that point to control the new variant,” says McKee. But many did not.

The article then discusses the see-saw of measures in the Czechia, which partly explains that graph, but not much in the way of explanation is provided for Estonia...

1
Could increased testing for COVID-19 slow its spread enough to allow the relaxation of social distancing measures?
2
Is there research on the relative effectiveness of different social distancing measures?
1
What is the distance the COVID-19 virus can travel in the air out of doors and remain infectious for someone breathing the same air?
1
Why does San Marino have the most total deaths per million and a CFR of 1.8%?
2
Does quarantine after testing positive for covid19 make the virus more dangerous?