Why do weekly deaths in the UK dramatically decrease during the end of December / beginning of January?

Looking at the weekly death statistics or the UK (something a few of us may have started the morbid habit of doing), I noticed an interesting phenomenon which seems to happen every year.

The reports of death around 27th December to 1st January drop off dramatically from the curve line - by about 5,000 per week, the lowest ebb of the year - and then regain their trend.

I imagine this has something to do with the holiday period, but what exactly? Is it more people staying home so less deaths on the roads? People around family so 'hanging on' for a bit longer? Lots of big meals and alcohol (though I imagine this would have the opposite effect, there should be a spike!). Or is it more morgues and coroners are off duty so there are less reports....?? 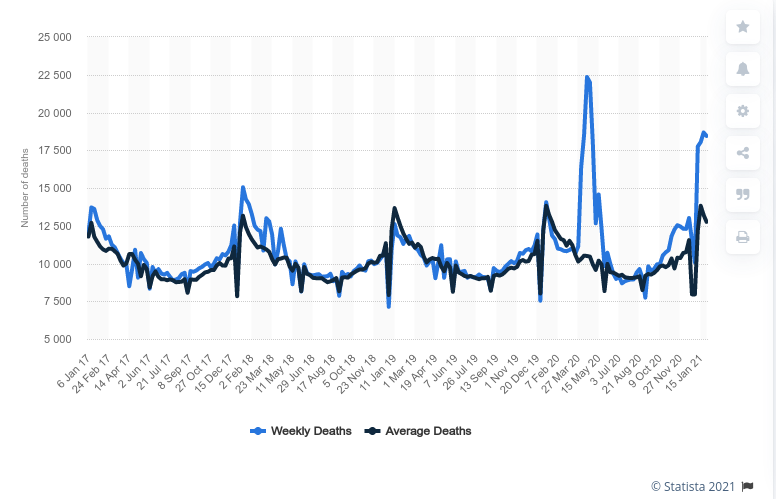 The official source for information on death records is the Office of National Statistics (ONS) and there are stats available with monthly figures and weekly figures.

When you look at the weekly total deaths figures for 2019 for example, you notice a drop in numbers during the last week of May, the last 2 weeks of August, and Christmas week.

When you look at the monthly figures, the figures are pretty consistent except there is a much higher figure in January and there are lower figures in June, August and September. Strangely, July's figures are fairly consistent with the rest of the year.

This could also explain the high figure for January as Christmas will shift some of the December figures into January.

The weekly stats spreadsheets downloadable from the ONS give figures for

The trouble is that without access to ONS data held within their IRIS software, deaths by cause is difficult to ascertain for causes other than respiratory diseases, and you cannot make any meaningful data comparisons with the ONS sheets on suicides as they are recorded in annual figures rather than weekly or monthly.

As far as I am able to find, there is no meaningful information that can be sought regarding causes for the dips in the figures you mention

Not the answer you're looking for? Browse other questions tagged statistics death mortality-rate united-kingdom or ask your own question.

5
Why is the reported number of COVID-19 deaths lower on Sundays and Mondays in the US?
5
Is the day-of-week variance in COVID-19 case numbers a well-established phenomenon?

1
How many people die due to various substance (illegal ones/legal/dangerous ones) per user?
1
What are the current statistics of the flu globally since December 2019 until today?
5
Why is the reported number of COVID-19 deaths lower on Sundays and Mondays in the US?
1
Total number of deaths in the USA before COVID-19 and in 2020?
0
Can the flu mortality be as high as covid-19 in some countries?
1
Why does San Marino have the most total deaths per million and a CFR of 1.8%?