Are there *in vitro* studies that find ivermectin directly effective against the SARS-CoV-2 spike or its other proteins?

Among the more obscure papers proposing ivermectin as a treatment for Covid-19 there are some that suggest it acts directly by binding to the SARS-CoV-2 spike protein (and other proteins of that virus too), based on in silico (computational) studies:

It can be deduced that Ivermectin has efficient binding with: (1) spike S1-RBD, where it binds with Thr 500, Asn 501 and Tyr 505 residues. These sites are critical to the SARS CoV-2 spike protein-mediated recognition from ACE-2 receptors in the host cellular system. Prominent H-bonding with Thr 500 and Asn 501 and water bridges were observed for more than 80% of simulation (Fig. 4a). (2) Spike S2-fusion domain, it binds to two specific regions of S2 fusion domain namely HR-1 sub-domain and fusion peptide domain. Major interactions were observed at the HR-1 domain, where it binds for up to 80% of simulation duration with Ser 968, Asn 969 and Gly 971 with H-bonds and water bridges. The fusion peptide region also exhibits weak affinity for ivermectin at Phe 797 and extremely weak interactions at Pro 792 residues with hydrophobic contact (Figs. ​4b). The S2 fusion domain is necessary to build the fusion bridge between the viral and host membrane, where the fusion peptide is highly non-polar flexible region which facilitates the direct contact with the host membrane components. (3) N-protein, the poly-nucleotide (RNA) interacting cleft of nucleocapsid N-protein characterized by residues Arg 69, Tyr 124, Asn 127 and Glu 137 were found interacting with ivermectin with rich H-bond ratio, see Fig 4c. (4) Main protease, the main protease of the SARS-CoV 2 is another target which exhibits good affinity for ivermectin in inhibition site too at Glu 19, Thr 25, Glu 47, Leu 50 (Fig. ​4d). 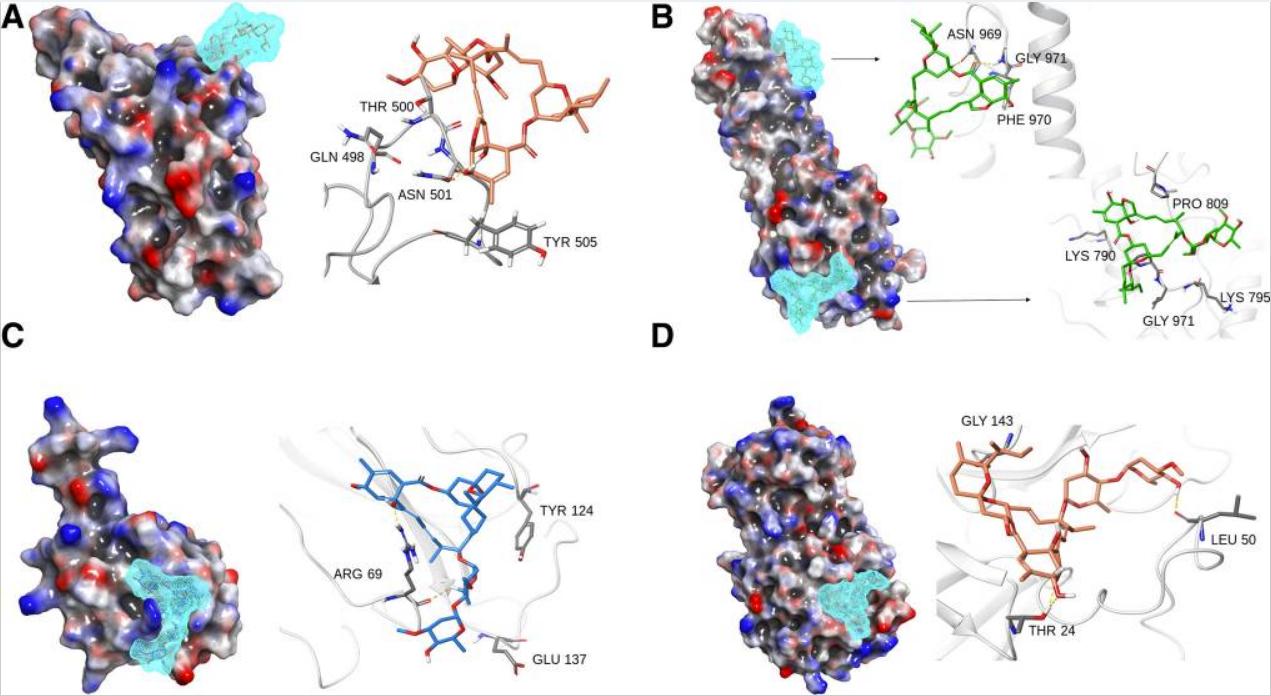 On the other hand, the somewhat more cited papers on ivermectin don't mention that (putative) direct mechanism of action on SARS-CoV-2 at all and only mention host-directed (IMPα-directed) effects via as the plausible mechanism. (Effects of this latter kind would not be specific to particular viruses, but result in broad anti-viral action, as I understand the issue.)

So are there in vitro (as opposed to in silico) studies that find any direct effect (i.e. affinity/avidity) of ivermectin to SARS-CoV-2 proteins as suggested in that first study? (Such lab studies are normally conducted with pseudoviral particles with just the protein of interest, at least for the spike protein; I'm not sure how one could test the main protease (aka 3CLpro) in that regard though.)

Are there in vitro studies that find ivermectin directly effective against the SARS-CoV-2 spike or its other proteins?

There are in vitro studies: The FDA-approved drug ivermectin inhibits the replication of SARS-CoV-2 in vitro, but the exact mechanism appears to be uncertain:

Taken together these results demonstrate that ivermectin has antiviral action against the SARS-CoV-2 clinical isolate in vitro, with a single dose able to control viral replication within 24–48 h in our system. We hypothesise that this is likely through inhibiting IMPα/β1-mediated nuclear import of viral proteins (Fig. 1G), as shown for other RNA viruses (Tay et al., 2013; Wagstaff et al., 2012; Yang et al., 2020); confirmation of this mechanism in the case of SARS-CoV-2, and identification of the specific SARS-CoV-2 and/or host component(s) impacted (see (Yang et al., 2020)) is an important focus future work in this laboratory. Ultimately, development of an effective anti-viral for SARS-CoV-2, if given to patients early in infection, could help to limit the viral load, prevent severe disease progression and limit person-person transmission. Benchmarking testing of ivermectin against other potential antivirals for SARS-CoV-2 with alternative mechanisms of action (Dong et al., 2020; Elfiky, 2020; Gordon et al., 2020; Li and De Clercq, 2020; Wang et al., 2020) would thus be important as soon as practicable. This Brief Report raises the possibility that ivermectin could be a useful antiviral to limit SARS-CoV-2, in similar fashion to those already reported (Dong et al., 2020; Elfiky, 2020; Gordon et al., 2020; Li and De Clercq, 2020; Wang et al., 2020); until one of these is proven to be beneficial in a clinical setting, all should be pursued as rapidly as possible.

Not the answer you're looking for? Browse other questions tagged sars-cov-2 antivirals or ask your own question.

4
(Why) are there so few studies of ivermectin as an antiviral in animal models?

4
What data is there for physicians to advise patients taking Ace Inhibitors during the COVID-19 pandemic?
4
Are there reliable studies on the viability of the SARS-CoV-2 virus with respect to temperature?
8
How is Lopinavir + Ritonavir expected to stop COVID-19?