Will the COVID-19 vaccine grant immunity to other coronaviruses?

An article on Medium had a Q&A with various medical and public policy experts about the vaccine and its rollout. One of the questions was exactly what you asked. The answer is basically "probably not but it might help against SARS and the research could lead to multi-coronavirus vaccines later." Here is the main part of the response:

“We do not expect any cross-protection against other coronavirus infections since the vaccines trigger an immune response to the SARS-CoV-2 spike protein,” Belongia said. “The immune system sees this as distinct from other human coronaviruses with little or no cross-reactivity. Seasonal coronaviruses cause mild upper respiratory illness, and the focus of vaccine development has been to prevent serious illness due to Covid-19.”

But we can’t completely rule out cross-strain protection against a new coronavirus that comes along later, or even SARS-CoV (which causes SARS) if it returns, said Maria Elena Bottazzi, PhD, associate dean of the National School of Tropical Medicine at Baylor College of Medicine and co-director of Texas Children’s Hospital Center for Vaccine Development.

“There is evidence, for instance, that because of the genetic similarity between SARS-CoV and SARS-CoV-2, antibodies generated from SARS vaccines or SARS-2 vaccines can cross neutralize both viruses,” Bottazzi said. “This provides initial evidence for the development of multivalent vaccines or possibly universal coronavirus vaccines. This will be the new research moving forward.”

Bottazzi's credentials are mentioned there. Belongia's are given elsewhere in the Q&A piece:

No they don't, although the spikes do share a "shaft" fragment "S2" that is recognized by some anti-bodies across several coronavirues. This cross-reactivity was even in blood samples collected as far back as 2011, but it was at low levels.

Two preliminary retrospective studies in the United Kingdom, sub-Sahara Africa, and the United States suggest that some people who were never infected with the virus that causes COVID-19 have cross-reactive antibodies against it—perhaps from previous exposure to similar human coronaviruses.

the researchers analyzed more than 300 blood samples collected from 2011 to 2018. While almost all samples had antibodies against coronaviruses that cause the common cold, 16 of 302 adults (5.3%) had antibodies that would recognize SARS-CoV-2—regardless of whether they had recently had a cold

And in slightly more technical detail, which explains these findings, a sub-unit of the spike is indeed shared between SARS-CoV-2 and "common cold" coronavirues [hCov], but not all of the spike:

Ng et al. report that in a cohort of 350 SARS-CoV-2–uninfected individuals, a small proportion had circulating immunoglobulin G (IgG) antibodies that could cross-react with the S2 subunit of the SARS-CoV-2 spike protein [...] By contrast, COVID-19 patients generated IgA, IgG, and IgM antibodies that recognized both the S1 and S2 subunits. The anti-S2 antibodies from SARS-CoV-2–uninfected patients showed specific neutralizing activity against both SARS-CoV-2 and SARS-CoV-2 S pseudotypes. A much higher percentage of SARS-CoV-2–uninfected children and adolescents were positive for these antibodies compared with adults. This pattern may be due to the fact that children and adolescents generally have higher hCoV infection rates and a more diverse antibody repertoire, which may explain the age distribution of COVID-19 susceptibility.

(In case you wonder, from the paper's supplementary materials, the pseudotyping involved "Lentiviral particles pseudotyped with either SARS-CoV-2 S or Vesicular Stomatitis Virus glycoprotein (VSVg)"; the latter was basically the control.)

Diagrammatically, the S2 unit is the "shaft" (or the "stalk") of the spike, not its tip (aka "bulbous head"); shown below for SARS-CoV-2. And it is the tip (S1) that actually provides specificity to the receptor (ACE2 in the case of SARS-CoV-2, but that receptor is also targeted by the original SARS virus, albeit with a spike that is only ~75% similar to the one in SARS-CoV-2, at the genome level).

Another study published this December even found some cross-reactivity to the S1 "tip" part of the spike between antibodies for HCoV-NL63 (which also targets ACE2 like SARS-CoV1 & 2, although by a spike that is very substantially genetically dissimilar). Again this cross-reactivity was slight (and actually HCoV-OC43 which targets a different receptor with its S1 has somewhat higher cross-reactivity with SARS-CoV-2 on S1): 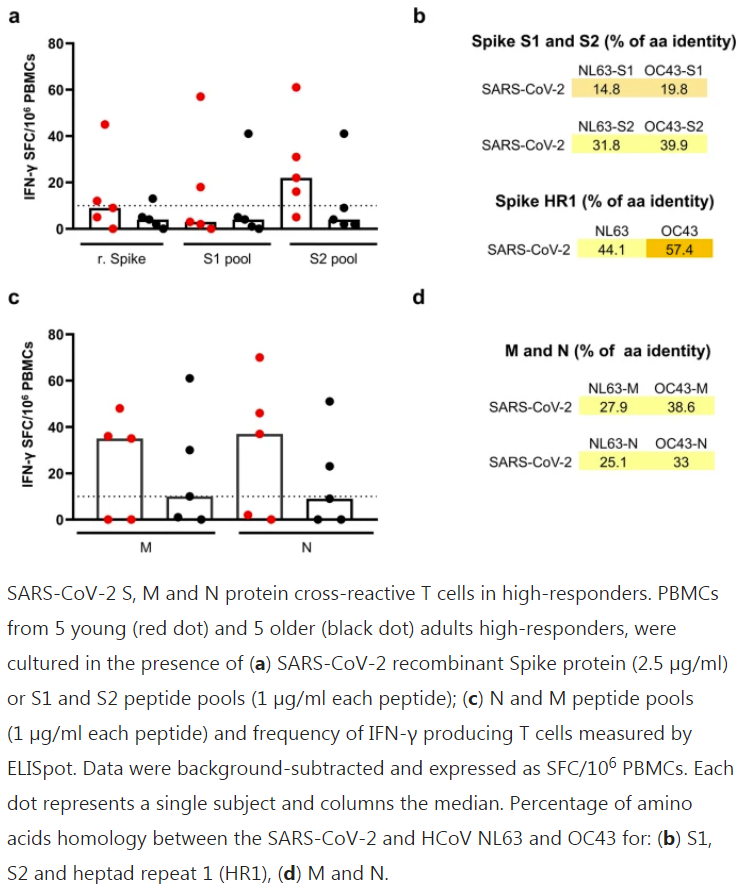 It's even less clear how much protection one can expect "in reverse" i.e. to hCoV while having SARS-CoV-2 antibodies, because this basically was not studied, as far as I can tell... (understandably since the risk of severe disease from "common cold" HCoVs is extremely rare, although not totally inexistent.)

Not the answer you're looking for? Browse other questions tagged covid-19 immune-system vaccination or ask your own question.

5
Does efficacy of the flu vaccine change if received while sick with the common-cold?
4
Will there ever be a universal vaccine for the common cold?
6
Is there a virus from which humans can recover, but which doesn't grant long lasting immunity?
1
What is the long-term COVID-19 outlook?
5
Could the COVID-19 vaccine adversely impact healthy protein reception?
2
Why wouldn't the Pfizer, Moderna, AstraZeneca, and Johnson & Johnson vaccines be equally effective?