Are All Root Canal Treatments Safe?

So my question is does every tooth that has had a root canal treatment carry the risk for the health of other organs such as brain and heart?

This is an important question. The article that you have mentioned is an excellent article explaining almost everything in detail.

Now as mentioned in that article, root canal treatment is indicated in irreversible pulpitis or when the pulp is dead or necrosed.

Now how does one know whether he/she has irreversible pulpitis or dead pulp?

As the name suggests irreversible pulpitis means the pulp now can not be healed back. The infection is irreversible. So the typical symptoms which one may experience include-

Irreversible pulpitis is marked by: -Pain to hot or cold that lingers. -Spontaneous pain, especially pain that wakes the patient from sleep. -Pain with chewing, especially if it is accompanied by one and two above. -Pain that is generally sharp and acute. -Pain that arises relatively recently after a) the placement of a new restoration b) multiple restorations in the same tooth and c) deep restorations relative to the pulp. The greater the number of insults to the pulp, aside from restorations (bruxism, abrasion, erosion, caries, etc.), the higher the probability of irreversible pulpal damage. Reference

In contrast, in reversible pulpitis where there are other better, restorative options other than root canal treatment, eg removing the infection followed by a restoration, the typical symptoms are-

In reversible pulpitis, pain occurs when a stimulus (usually cold or sweet) is applied to the tooth. When the stimulus is removed, the pain ceases within 1 to 2 seconds. Reference

There is another form wherein if one ignores the symptoms of irreversible pulpitis then slowly the infection will affect the whole pulp making the pulp dead and then the infection may go apically from the canals to affect the parts apical to a tooth. This is known as necrosed pulp or dead pulp. And if the parts apical to tooth have been involved it will be known as apical periodontitis and this may have different forms, eg. cyst, granuloma etc. 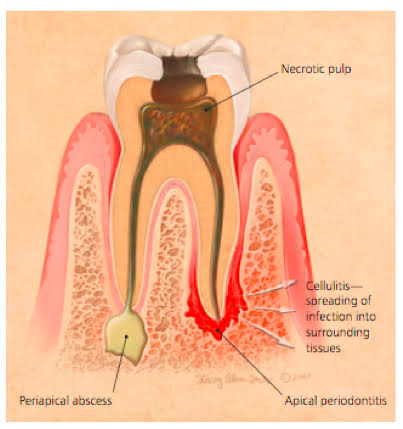 If the pulp is necrosed and the infection is not much apical, in that case also root canal treatment is indicated. So looking at the symptoms of a necrosed pulp-

If a non-vital pulp is symptomatic there can be 1) pain to chewing, 2) spontaneous pain that is generally dull and less localized than that of irreversible pulpitis, 3) a lack of response to thermal testing, 4) palpation sensitivity, or 5) swelling.

Or else pulp necrosis may be asymptomatic. Reference

How does root canal treatment heal the periapical infection?

Yes, this is true. However before that, I will brief about what exactly happens in the RCT procedure.

An access hole will then be drilled into the tooth. The pulp, along with bacteria and related debris, is removed from the tooth. The cleaning-out process is accomplished using root canal files. A series of these files of increasing diameter are each subsequently placed into the access hole and worked down the full length of the tooth to scrape and scrub the sides of the root canals. Water or sodium hypochlorite is used periodically to flush away the debris.

Once the tooth is thoroughly cleaned, it needs to be sealed. Some dentists like to wait a week before sealing the tooth. For instance, if there is an infection, your dentist may put a medication inside the tooth to clear it up. Others may choose to seal the tooth the same day it is cleaned out. If root canal therapy is not completed on the same day, a temporary filling is placed in the exterior hole in the tooth to keep contaminants out between appointments. At the next appointment, to fill the interior of the tooth, a sealer paste and a rubber compound called gutta-percha are placed into the tooth's root canal. To fill the exterior access hole created at the beginning of treatment, a filling is placed. Reference

Now the last part, i.e. sealing of the root canal also known as obturation is very crucial. This is because as mentioned in the op's reference article, that, there are chances for the infection/bacteria to be left behind in the root canal. Hence if one seals the canals, including the auxillary, accessory canals then there is no chance for the remaining infection or bacteria to go apical to the tooth and hence into the bloodstream.

Nowadays there so many techniques of root canal obturation so that one can seal all the potential openings of the root. This is an excellent article describing the same. 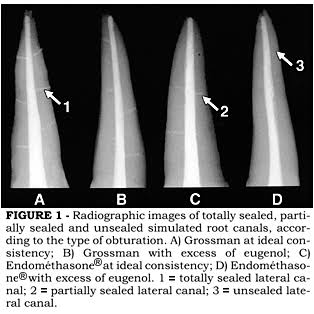 You can appreciate the whiteness on x ray image in the left most tooth indicating sealing of all the canals including the accessories.

The dentinal tubules also do contain bacteria. Now the outermost layer of the root is cementum. This is again a hard tissue. So according to various articles the cementum layer is impermeable to bacteria. Unless there is a breach in the cemental layer, say due root resorption the bacteria can not penetrate via dentinal tubules through the cementum into the periapical area and hence into the bloodstream. Also as the canals are obturated, making the nutritional supply for the bacteria deficient in the dentinal tubules, they don't survive long enough. Reference. Also along with the bactericidal intracranial medicament(if used) in between the appointments hardly any bacteria survive!

Hence, to conclude, yes the root canal treatment may carry a risk of infection for organs like brain or heart, but only rarely, when it is not properly sealed. Hence it is recommended to visit a well experienced dentist, much better, an endodontist.

3
Why does a dental abscess / infection usually go away after a root canal?

4
Root canal before trying to get pregnant
7
Are chlorhexidine mouthwashes safe?
6
Pain after root canal treatment
3
Root canal therapy for diabetes patient?
2
Pain relating to Root Canal Treatment
3
Why does a dental abscess / infection usually go away after a root canal?
1
All canal types of mandible premolar teeth