Do having multiple COVID tests decrease the chance of a false negative? [closed]

Ask Question
Asked 4 months ago
Active 4 months ago
Viewed 70 times
0
Closed. This question is off-topic. It is not currently accepting answers.

With my work we're required to get frequent COVID tests. Sometimes it happens we get COVID tested twice before the first day of work. So for example if I'm working Saturday I may get tested the previous Saturday and Thursday. Wouldn't the most recent test be the most accurate? What's the point of doing two? Even if COVID is dormant in the body, wouldn't the second one still be more accurate? There's a lot of bureaucracy in the industry and it wouldn't surprise em if this practice is pointless.

Multiple tests can decrease the chance of a false negative.

The probability of detection varies with the time since exposure. This Nature article presents an informative (albeit rough) graph. Suppose, for example, your Saturday and Thursday tests occurred at the times I labeled on the graph below: 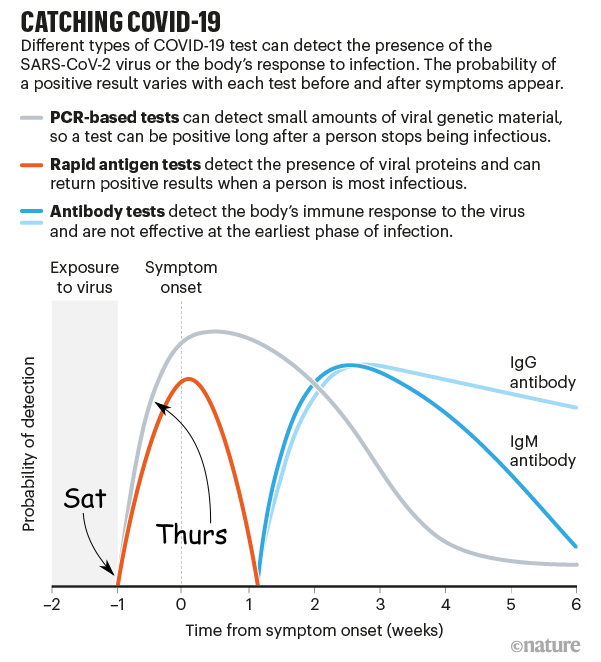 Then it would be quite possible for the Saturday test to return a (false) negative result while the Thursday test returns a positive result, even though both were testing for the same infection.

Notice (in the scenario above) that both tests occurred before the onset of symptoms, so it would be impossible to know if you were infected without testing.

Both tests are valuable since detecting infections as early as possible reduces opportunities for the virus to spread (assuming the infected person quarantines themself).

Moreover, keep in mind that the graph is only depicting probabilities. If the Saturday test has, say, a 40% chance of detecting the virus, but the Thursday test has an 80% chance, then there is still an 8% chance (= 0.40 * (1 - 0.80)) that if the person is infected, the Saturday test returns a true positive while the Thursday test returns a false negative.

Not the answer you're looking for? Browse other questions tagged covid-19 test intestine or ask your own question.

1
Having tested positive for COVID-19, will future tests be positive?
5
Why are people with COVID-19 symptoms being denied tests in the US?
7
What is the expected false positives/negatives for COVID-19 tests?
4
Can the capacity for COVID-19 tests be amplified by testing multiple samples mixed together and testing each only if positive?
6
Why were so many Covid-19 negative tests among close contacts of the early Chinese cases?
-1
What sort of filter material self sterilizes?
1
COVID-19: Is it possible to use the specimen collected through swabs for multiple tests
2
How often is a Ct of 30 (or more) using the Charité protocol a false positive for Covid-19?